Information for this feature was researched from all across the Internet. All information was double- and triple-checked across several sources for accuracy.

Sources included a wide spectrum of Wikipedia pages, including its list of assassinations worldwide and its list of assassinated American politicians; the Political Graveyard.com's list of Murdered and Assassinated Politicians; the Southern Poverty Law Center's List of Civil Rights Martyrs; archives of print, TV, and online news organizations; the BBC's online compilation of news "On This Day"; the daily lists of historical events by HistoryOrb.com; and Talking Point Memo's list of the Seven U.S. Ambassadors Killed in the Line of Duty. And many, many others.

Any errors are purely unintentional.

Political murder of the day

Bombs ripped through two crowded markets and a bus in Delhi.

Oct. 29, 2005: Sixty-two people were killed and more than 200 were injured in three terrorist bombings in central Delhi in northern India. The attacks in the Indian capital were India’s deadliest bombings in 2005.

The bombings were blamed on Islamic terrorists who also were tied to Kashmir separatists. Two of the bombings were in crowded markets, which were filled with people shopping for the upcoming holidays of Diwali, the Hindu festival of lights, and the festival of Eid, celebrated by Muslims. The third bomb went off on a bus during evening rush hour.

A suspect tied to LeT was arrested and held for months but was finally released.

Miss a murder? Here are past ones 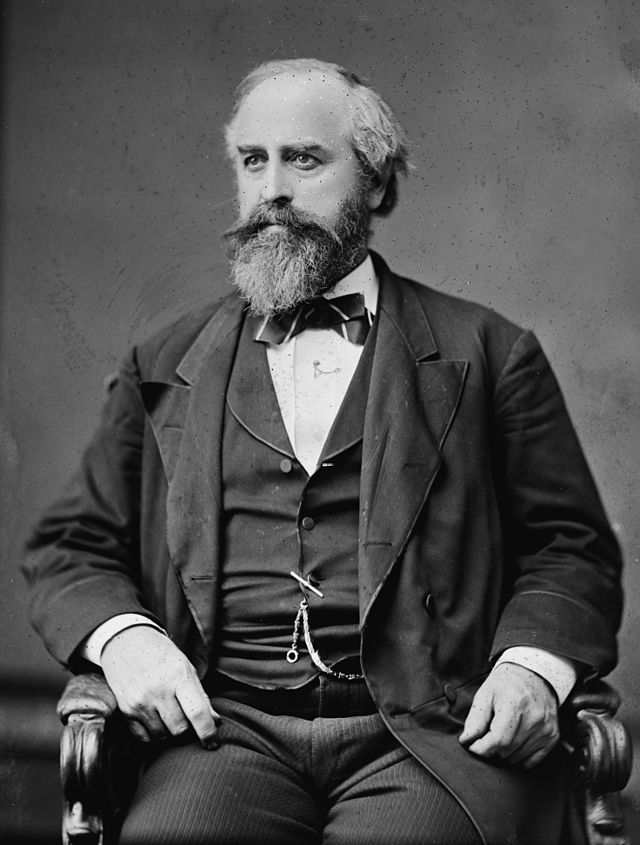 Oct. 28, 1893: The mayor of Chicago was shot and killed in his home by an Irish immigrant who was under the delusion that the mayor was going to appoint him as the city’s corporation counsel.

Carter Henry Harrison Sr. was elected five times as Chicago’s mayor and served two terms in Congress. He took a break from politics when he owned and edited the Chicago Times, but he was re-elected mayor in time for the 1893 Columbian Exposition in Chicago. Harrison was a major backer of the World’s Fair and basked in its publicity for the several months it was open.

On Oct. 28, 1893, two days before the exposition was to close, Harrison was attacked in his home by Patrick Eugene Prendergast. Prendergast was an unskilled delivery contractor for the Chicago Inter Ocean who had supported Harrison’s run for a fifth term by sending rambling postcards backing Harrison to complete strangers, many of them politicians and other city leaders whose names Prendergast had read in newspapers. The celebration of the final day of the Exposition was cancelled because of a large public memorial service for Harrison.

After multiple attempts by Prendergast’s lawyers to have him declared insane, including one by attorney Clarence Darrow, he was convicted of Harrison’s murder. Prendergast was hanged in 1894.

Much colorful detail about Harrison and Prendergast can be found in Erik Larson’s The Devil in the White City, a retelling of how Chicago built the 1893 Columbian Exposition World’s Fair. The book also contains the chilling story of an urban serial killer, H.H. Holmes.

Memorials to the victims of the Tree of Life Synagogue shooting in Pittsburgh.

Oct. 27, 2018: Eleven worshipers were shot and killed and seven people were injured by a white anti-Semitic domestic terrorist at a Pittsburgh synagogue during Shabbat services.

The attack on the Tree of Life Synagogue was the deadliest single attack on the U.S. Jewish community. The shooter, Robert Bowers, had a history of posting anti-Semitic and anti-immigrant sentiments on extreme right-wing websites.

Shortly before the attack, he posted, “I can’t sit by and watch my people get slaughtered. Screw your optics, I’m going in.”

Bowers entered the synagogue as three Saturday morning Shabbat services were taking place. He kept shooting for 20 minutes, armed with an AR-15 semiautomatic assault-style rifle and three semi-automatic pistols, all of which he used to shoot at worshipers at services in the basement and in an upstairs chapel. At one point in the shooting, Bowers shouted, “All Jews must die!”

Worldwide reaction was one of horror. World and religious leaders all condemned the attack, and vigils and rallies were held across the country. In all, Bowers was charged with 63 federal crimes and 36 state crimes. He pleaded not guilty to all charges. Federal prosecutors are seeking the death penalty. A trial date has not been set.

In the year after the Tree of Life shooting, at least 12 white supremacists have been arrested on allegations of plotting, threatening, or carrying out anti-Semitic attacks in the U.S., and there have been 50 incidents of white supremacists accused of targeting Jewish institutions’ property, according to the Anti-Defamation League. The year 2019 alone saw the greatest number of anti-Semitic incidents — over 2,100 — in more than 40 years.

Oct. 26, 1979: The president of South Korea was shot and killed “accidentally” by the chief of his intelligence service.

The assassination was at a banquet being held in his honor in Seoul in a likely coup attempt by intelligence officials. Five others, including the president’s bodyguard, also were killed.

President Park Chung-Hee served as a brigadier general in the Korean War, rising to the rank of deputy commander of the Korean Army. He took power in a military coup in 1961 and ruled as a military strongman, overseeing clashes between North and South Korea throughout the 1960s.

Park was elected president in his own right in 1963 and oversaw growth in the South Korean economy. He also strengthened South Korean ties with the United States and Japan. But his final term in office was marked by student protests, as he grew more autocratic, suspending the country’s constitution, lengthening his term in office, and making it illegal to criticize the president.

Park survived an earlier assassination attempt in 1974, when a North Korean man, Mun Se-Gwang, fired at Park while he was giving a speech. The bullet instead hit Park’s wife, Yuk Young-Soo, who died.

During a banquet being held in Park’s honor at Korean Central Intelligence Agency headquarters on Oct. 26, 1979, an argument broke out between Park’s chief bodyguard, Cha Chi-Chui, and Korean CIA Director Kim Jae-Kyu. Kim fired, later claiming that he was aiming at Cha and only hit Park when the president rose to intervene. The incident was later seen as an attempted coup by intelligence agents.

After Park’s funeral, more than 2 million Koreans lined the streets as his body was moved to a national cemetery. Kim and four other Korean CIA agents were convicted and sentenced to death.

Oct. 24, 1975: The Turkish ambassador to France was shot and killed in Paris by Armenian militants aiming to force Turkey to acknowledge its role in the Armenian genocide in 1915. Killed were İsmail Erez, a long-time Turkish diplomat, and his driver, Talip Yener, as Erez’ car approached the Turkish Embassy.

Erez had served in Turkey’s Ministry of Foreign Affairs his whole career, with positions at the United Nations, the World Health Organization, and UNESCO. He also was ambassador to Italy and Lebanon.

On Oct. 24, as Erez was returning to the Turkish Embassy in Paris after a reception, a small group of Armenian militants attacked his vehicle. They were members of ASALA, or the Armenian Secret Army for the Liberation of Armenia, which had the aim of forcing the Turkish government to acknowledge its responsibility for the Armenian genocide in 1915. Another name for the group was JCAG, or Justice Commandos of the Armenian Genocide. 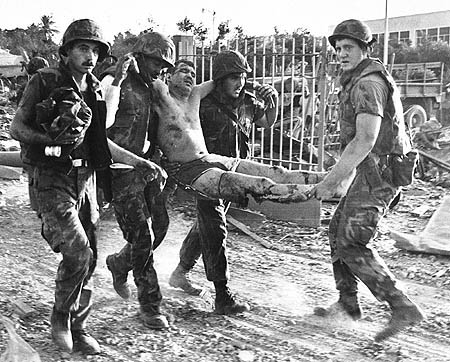 An injured Marine is taken for emergency treatment after the bombing.

Suicide bombers from the group Islamic Jihad with ties to Iran drove the truck into two buildings and claimed responsibility for the attacks. Fifty-eight French servicemen also died, and more than 25 Lebanese civilians were killed.

It was the biggest single-day death toll for the Marines since World War II in the Battle of Iwo Jima. Another 128 Americans were injured; 12 of them later died. This attack led to the withdrawal of the international peacekeeping force from Lebanon.

In June 1983, Israel had invaded Lebanon, which was in the midst of a civil war. Israel reportedly wanted to create a buffer zone between Israel and the Palestine Liberation Organization and Syrian forces in Lebanon. U.S. forces, backing Israel, were in Lebanon in a peacekeeping role. But the backing of Israel created ill will within the Muslim population, especially after the U.S. launched a missile attack on Sept. 19 that hit and killed innocent bystanders.

On Sept. 26, the U.S. National Security Administration intercepted a message from Iranian intelligence directing the Iranian ambassador to Lebanon to “take spectacular action against the American Marines.” U.S. officials did not deliver the message to the Marine unit until Oct. 26, after the bombing.

Despite heated rhetoric and talk of retaliation from U.S. officials, no counter strike by the U.S. was ever launched, although the French launched an airstrike in the Bakaa Valley against the Islamic Revolutionary Guard Corps. Many of the surviving U.S. servicemen were moved to nearby warships.

President Ronald Reagan ordered the Marines out of Lebanon by the next March. U.S. intelligence officials concluded that extremist elements in Syria and Iran were ultimately responsible and that the group that came to be called Hezbollah carried out the bombing. Hezbollah, Iran, and Syria publicly denied any involvement in the bombing.

In 2001, families of the 241 servicemen filed a civil suit in U.S. court against Iran for its part in the bombing and its ties to Hezbollah, and by 2012, a U.S. judge ordered Iran to pay the families more than $2 billion. Needless to say, Iran has not followed through with payment.

Oct. 22, 1868: The first sitting member of Congress to be assassinated was shot and killed while traveling in Monroe County, Arkansas, by a member of the Ku Klux Klan.

Republican U.S. Rep. James M. Hinds was a Northern lawyer who moved to Arkansas in 1865, after the Civil War. He was elected to the Arkansas constitutional convention to help rewrite the state’s charter after the war. Hinds was elected to Congress in June 1868, following the state’s return to the Union. In his four months in Congress, Hinds promoted the rights and interests of African-Americans at the national and state level, including teaching black men about their rights as citizens.

In September 1868, Hinds traveled to the southern part of Arkansas, where he started receiving death threats, according to letters he sent to his wife. Hinds was traveling with the Rev. Joseph Brooks, a Methodist minister also dedicated to helping newly empowered black citizens, when they were attacked on Oct. 22 by George A. Clark, a KKK member who had given them directions earlier.

Brooks survived, but Hinds died of his wounds. Clark was never arrested or prosecuted for the attack. The attack on the Reconstruction-era congressman was feared to be a precursor to a general attack on the government and an attempt to take over the polls in Arkansas before the upcoming election, but those attacks never took place.

Hinds is one of six members of Congress to be murdered while in office.

5 Comments on “Political murder of the day”

2005: Sixty-two people were killed and more than 200 were injured in three terrorist bombings in central Delhi in northern India. Click Political murder of the day for details.