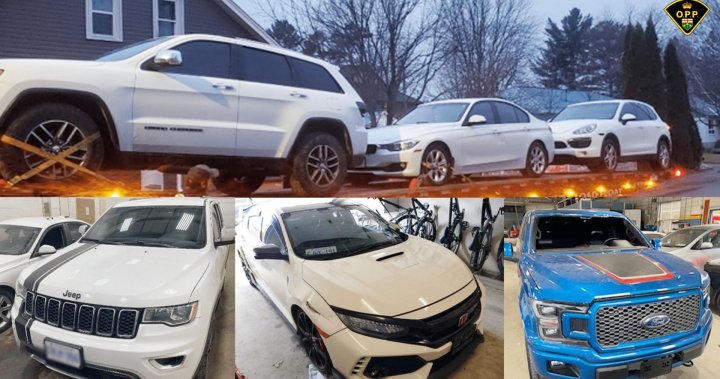 Ontario Provincial Police say several people and hundreds of charges have been laid following an inter-provincial investigation into fraudulent modification and sale of hundreds of stolen vehicles.

During the course of the investigation dubbed Project Myra, the OPP said 214 cars valued at more than $12 million were recovered.

The first was an alleged criminal organization based in Peel Region that was responsible for re-vinning vehicles stolen from Ontario, fraudulently registering the vehicles, and then reselling them, OPP said.

“Re-vinning” is the process of removing the original vehicle identification number, or VIN, and replacing it with a forged number.

The second was based in Durham Region and Toronto. The OPP said this alleged criminal organization was responsible for fraudulently registering vehicles in Saskatchewan, transferring the fraudulent vehicle documentation to Ontario, then registering them in Ontario.

The vehicles would then be resold to various individuals, including criminal networks, OPP said.

The third alleged criminal organization was based in York Region and was responsible for re-vinning high-end stolen vehicles, fraudulently registering them and then reselling or keeping the cars.

Hondas and Acuras accounted for 37 per cent of vehicles recovered, OPP said.

Although they added that a wide range of stolen vehicle makes and models were recovered.

There were 28 people charged by police with 242 offences in relation to Project Myra.

The OPP also said employees of ServiceOntario were included in their list of people who were charged as they are accused of “assisting with the illegitimate registration of stolen vehicles.”

In an email to Global News, the Ministry of Public and Business Service – which oversees Service Ontario – said it takes these matters “extremely seriously and is working with law enforcement to support their investigation.”

“We do not speak to matters that are part of an active police investigation or matters before the court,” the email read.

#OPP in collaboration with Équité and our policing partners have recovered 214 stolen vehicles as a part of #ProjectMYRA, a 22-month investigation into criminal organizations modifying VINs and selling stolen vehicles through private sales. https://t.co/z4am1deFCF pic.twitter.com/OoUg618zeF