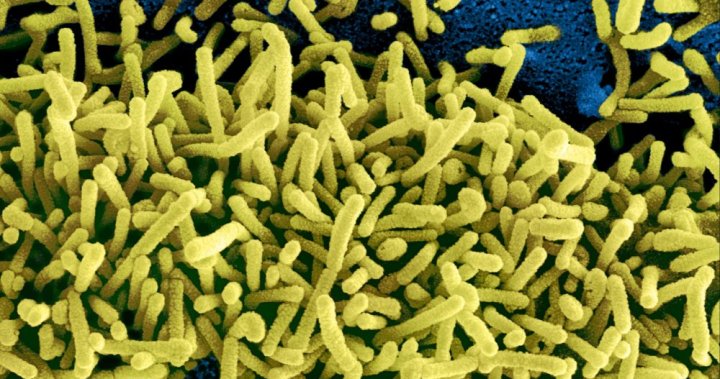 The World Health Organization (WHO) recently declared an outbreak of the highly-infectious Marburg virus in Ghana after two men died of the disease. And even though it’s a cause for concern in the African nation, experts say there’s no need to panic in Canada just yet.

The disease, a very infectious hemorrhagic fever in the same family as Ebola, is spread to people by fruit bats and transmitted among people through direct contact with bodily fluids of infected people and surfaces, according to the WHO.

So far, only four cases have been detected in Ghana.

Should we be worried about Marburg coming to Canada?

While the virus is highly contagious, some infectious disease experts say they aren’t worried about the virus impacting Canada at this point in time.

“International travel can make this infection go beyond the current borders of Ghana … but it shouldn’t be, at least for the moment, a source of anxiety for the general public,” Dr. Donald Vinh, an infectious diseases specialist at McGill University Health Centre, told Global News.

Isaac Bogoch, an infectious diseases specialist at Toronto General Hospital, said that currently the risk of the virus coming to Canada and causing a major outbreak “would be extraordinarily small.”

“The infection is very similar, not identical, to Ebola and we’ve seen small outbreaks of Ebola grow larger…and in the larger outbreaks, we’ve seen exported cases as well. They’re rare, but they certainly have happened,” he added.

Bogoch said that in the large Ebola virus outbreak in 2014, there had been a handful of cases being exported to countries like the United States.

“You usually see that with much larger outbreaks, but currently with four known cases in Ghana, you just have to keep your eye on them,” Bogoch said.

In the meantime, however, Vinh said Marburg can be a case of concern for several reasons. Firstly, he noted, it’s a “fatal and frightful disease.”

“It is like Ebola where if you are infected, you can progress to the late stage of disease in which you’re bleeding from every orifice in your body. And that’s the cause of death. So that’s a very frightful infection,” said Vinh.

The second cause of concern is that there is no established vaccine and no antiviral treatment for Marburg.

“Of course, it’s concerning because international spread can make this infection go beyond the current borders of Ghana…so it is concerning for the medical and scientific communities, but it shouldn’t be…for the general public,” Vinh added.

With the first two cases, in southern Ghana’s Ashanti region, both people had symptoms including diarrhea, fever, nausea and vomiting, before dying in hospital, the WHO said on July 17.

Both of these people are being treated in hospital.

This outbreak marks only the second time that the disease has been detected in West Africa after Guinea confirmed a single case detected in August, 2021, according to WHO. The outbreak in Guinea was declared over five weeks later.

Soce Fall said information received from Ghana suggested there were around 180 contacts being followed up and WHO teams were making sure that none were missed.

He also said the cases had been reported in three different regions in Ghana, creating a “very difficult” situation.

“Although the cases are not high at the moment, …we need to make sure that every hotspot can be stopped otherwise it will become more complex,” he said.

Monkeypox to Marburg: Why are these viruses surfacing?

Both Vinh and Bogoch said that global climate change and human encroachment into environments contribute to viral outbreaks taking place that should be taken seriously.

Vinh said that so far all of the viruses, like COVID-19, monkeypox and Marburg, have been initially spread from animals to a human.

“COVID was spread from a rodent to a human, and now with Marburg, it’s spread from bats … so these outbreaks are a sign that there is a lot of potential for the animal to human transmission,” said Vinh.

He also said that this is happening because humans are encroaching into new territories that have animals on them and those animals have their own infections.

“We have climate change, which changes the habitats of animals and causes them to expand to territories where they would not normally expand. And that, again, leads to the proximity of animals to humans,” Vinh said.

“This increase in infections with COVID, with monkeypox, with Marburg, is a reflection of how we need to take a step back and realize that there is ecological disturbances because of human activity as a reason for all this,” he added.

Vinh said that in addition to developing antiviral medications for these infections, society should take a step back and realize that human encroachment on newer land may need to be restricted.

“I think that the fact that this is occurring repeatedly tells us that, you know. We’re pushing our luck here,” he said.

Bogoch echoed that sentiment and said that these viral outbreaks aren’t accidents.

“We have a very, very interconnected world where we know that if someone has an infection on one side of the earth, you can introduce that to the other side of the earth in as little as 24 hours,” he said.

Bogoch also believes this isn’t going to be the last declaration of a viral outbreak — there’s going to be more if human encroachment and global climate change continue their course.

— with files from Reuters and the Associated Press