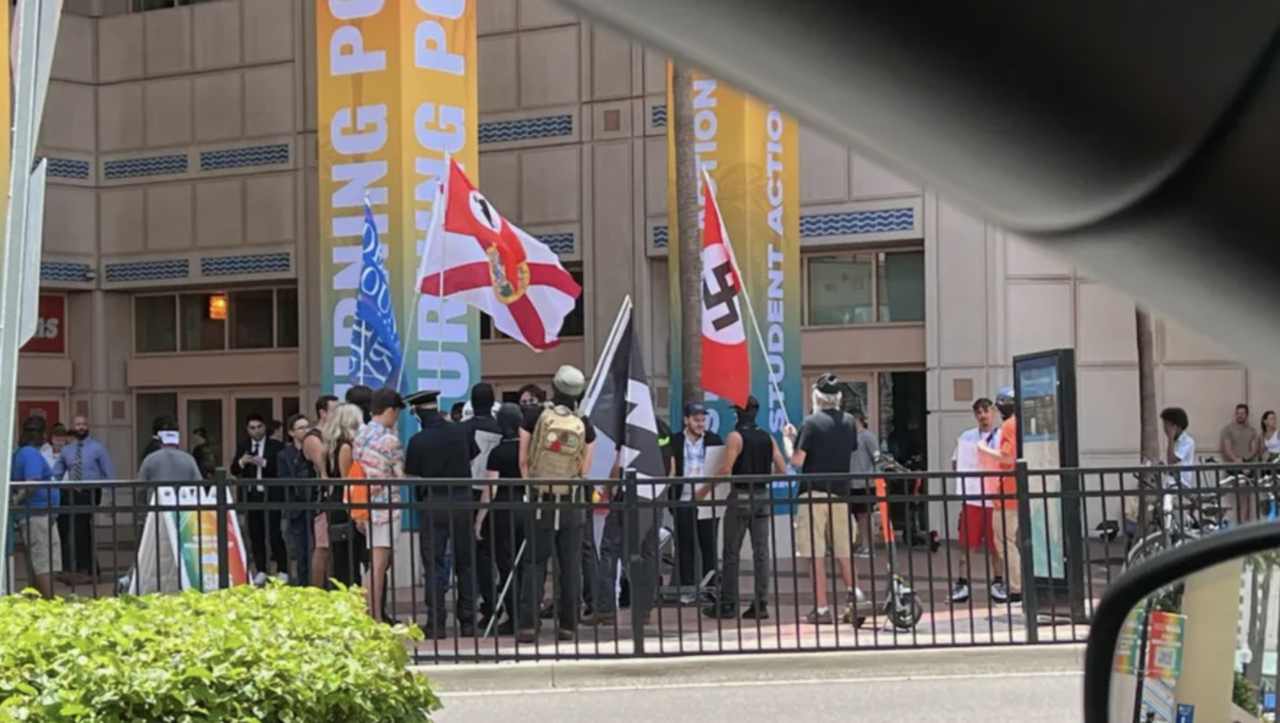 The Florida Holocaust Museum is condemning a neo-Nazi demonstration outside the Turning Point USA Summit in Tampa this weekend, calling it a “direct threat to the Jewish community.”

“Openly and proudly displaying genocidal symbols is a direct threat to the Jewish community. Carrying the Nazi flag, or that of the SS, the organization responsible for some of the worst atrocities of the Holocaust, is an indefensible act of pure hatred,” Florida Holocaust Museum chairman Mike Igel said in a statement.

The demonstration occurred outside of the Tampa Convention Center, with individuals waving neo-nazi flags, anti-Semitic posters and swastikas, alongside ‘DeSantis Country’ flags.

“This isn’t about politics or religion. It’s about humanity. The Florida Holocaust Museum calls upon everyone, Jew and non-Jew, regardless of political affiliation, to condemn this blatant antisemitism in the strongest possible terms. This should matter to everyone,” Igel said. “When antisemitic incidents occur that leverage chilling Nazi symbols, we are reminded of the importance of The Florida Holocaust Museum’s mission to preserve the memory of the Holocaust while educating future generations to prevent antisemitism and hatred of all kinds. We will not be deterred.”

Igel went on in his statement to thank Gov. Ron DeSantis and the Florida Legislature for supporting the museum’s program expansion.

The Legislature approved a $750,000 appropriation to the Florida Holocaust Museum this past Session to fund the museum’s efforts to digitize, index and preserve testimonies and artifacts from Holocaust survivors and liberators. The amount from the state accounts for about a third of the project’s funding, with another $15,000 provided by local government and about $1.54 million funded by donors. The Legislature approved the same amount of funding for the museum last year, with this year’s funds hoping to “build on and continue last year’s support for 21st Century interactive exhibits.”

“Today’s demonstration shows we have much work left to do but we thank Governor Ron DeSantis and Florida’s Legislature for their leadership this year to significantly expand The Florida Holocaust Museum’s ability to educate students, our community and state about the atrocities of the Holocaust and to show the way forward to a future free of hate,” Igel said.

In the last few years, the museum has been the target of anti-semitic attacks, including what investigators deemed a hate crime in May 2021, after graffiti was found on an outside wall, leading to an investigation by the St. Petersburg Police Department. The graffiti left the words “The Jews are guilty,” surrounded by swastikas.

Crist went on the criticize the lack of response from DeSantis on the demonstrations.

“To date there’s been little to no response or condemnation from Governor Ron DeSantis. It’s reprehensible,” Crist added. “Florida needs a governor that will unequivocally, forcefully, condemn hate. Governor DeSantis is coddling anti-Semitism because he views these extremists as part of his political base. It’s just another reason he must be replaced in November.”