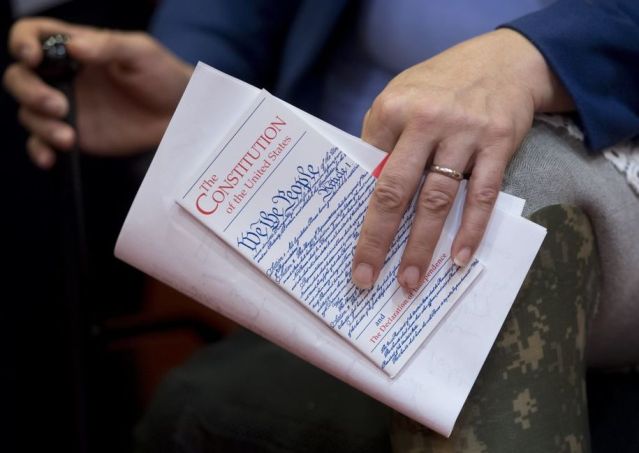 Perhaps Donald Trump should try reading this document, so he’ll know as much as a seventh grader.

“How come the president is doing stuff he’s not supposed to do?”

That was the question posed to me by my seventh-grade tutoring student. She’s studying for an upcoming test on the U.S. Constitution, and in 2019, you can’t teach the Constitution without having the biggest lesson on U.S. government staring you in the face.

In Illinois, all students must pass a test on the Illinois Constitution and U.S. Constitution before graduating from eighth grade. Many schools teach this in seventh grade. (I remember taking it as a junior high student.) The requirement causes anxiety, but the tests end up being pretty easy, as long as students do the reading. There’s no standardized test; students study the subject for several weeks and just have to show understanding of what the Constitution is about.

I’ve been a volunteer tutor since 1981, taking several years off when my own kids were growing up. I enjoy tutoring students who are middle school age, because they’re beyond the stage of learning to read but they’re young enough not to have too much of a teenage attitude.

This year, besides teaching about the three branches of government and the Bill of Rights, there’s an extra constitutional lesson to pass on — what happens when a president gets impeached?

I started tutoring Akeelah this fall in a nonprofit volunteer tutoring program that serves students mostly from Chicago’s West Side. She’s a bright seventh grader and a conscientious student who gets excellent grades but needs to improve in writing and vocabulary skills. She’s working hard, hoping to be accepted into one of the Chicago Public Schools’ selective enrollment high schools, such as Michelle Obama’s alma mater, Whitney Young. Akeelah is a sweet kid who shares interests with many 13-year-old girls: music, hairstyles, reading, spending time with friends. She looks forward to seeing Frozen II.

Last week, after finishing with her homework (first rule of tutoring: Even if you have the world’s best lesson plan prepared, set it aside when they have homework, because it’s due tomorrow), we settled in to start with the basics of the U.S. Constitution: How the need for a stronger constitution grew from the weaknesses of the Articles of Confederation. The duties of the three branches of government. The differences between the two houses of Congress, and the special responsibilities assigned to each body. The requirements for being elected as a representative, senator, and president, and how long terms for each office last.

She still has a few weeks before the test, and there’s still a lot more material to get through. I always make sure my students know more than the basics: They need to know the names of their two senators, their representative, the Illinois governor, the Chicago mayor, etc. She knew some but not all of these—she took notes and added them to her study pile.

But then she started asking me questions about impeachment, since that’s all over the news.

I pointed to the description of the reasons for impeachment in Article II, Section 4: “The President, Vice President and all civil Officers of the United States, shall be removed from Office on Impeachment for, and Conviction of, Treason, Bribery, or other high Crimes and Misdemeanors.”

That description, of course, required more explanations and more questions, especially the part about “high crimes and misdemeanors.”

“What did President Trump do wrong to get impeached?” Akeelah asked me. “And what’s a high crime?” (I think she figured out that committing treason is pretty bad.)

Where to start? “He hasn’t been impeached yet,” I said. “The House of Representatives is hearing from people in the government about what he might have done wrong.”

My job is to inform, not to indoctrinate. I didn’t want to come out and say, “He’s been breaking the law since his first day in office,” although that’s true. I could give her a laundry list about how he’s making a profit from foreign governments who stay at his hotel in Washington; how he broke election law in the 2016 election with help from Russia; how he obstructed justice into the investigation of how and why he fired James Comey as head of the FBI. But just like the House Intelligence Committee, I decided to keep it simple and stick to Ukraine, the facts of which get worse for Trump every day.

“So he was supposed to give this money to Ukraine and he didn’t?” (Another quick teaching opportunity: Look up Ukraine on a map to show her where it is.)

“Well, he did eventually, but only after it came out publicly that he didn’t.”

Akeelah looked at me skeptically. “So Congress told him to do that, and he didn’t? Why not?”

This gave me a chance to talk about the 2020 election, and how he wanted Ukraine to investigate his possible opponent, former Vice President Joe Biden, even though there’s no evidence that Biden did anything wrong.

“So why is that illegal?”

With that, we launched into a discussion about emoluments, which sent us to the dictionary (more vocabulary words!) and how presidents aren’t supposed to accept anything of value from a foreign government, such as help in an election. All of which brought us back to the original question: “How come the president is doing stuff he’s not supposed to do?”

We discussed whether Trump eventually will get impeached and what will happen after that. She thought it was interesting that all three branches of government got involved in the process. “So do you think they’ll vote to kick him out?”

Probably not, I said, but it’s important for the House to stand up for the Constitution. She agreed.

This is why I love being a tutor and why I find it so rewarding when you see a light bulb go off, signaling a student’s new level of understanding.

You know who else is a volunteer tutor? Merrick Garland, chief judge of the U.S. Court of Appeals, District of Columbia Circuit. When President Obama nominated him to the U.S. Supreme Court in 2016, among Garland’s evidence of public service was his many years as a tutor at the J.O. Wilson Elementary School in Northeast Washington, D.C. He goes to the school every other Monday afternoon to tutor students there. A quick call to his office confirmed that yes, judge Garland is still tutoring. Garland also requires the lawyers who clerk for him to become tutors.

This Washington Post story, published at the time of his nomination in 2016, described his tutoring service, which has now lasted longer than 20 years.

“For me, this is about so much more than tutoring,” Charlene Wilburn, a teacher at J.O. Wilson, said in a statement the White House released to The Washington Post on Saturday afternoon. “It’s about our children having another adult in their lives who encourages them when they need it, supports them when they falter, and tells them to never give up on their dreams.

“I’ll tell you what I appreciate most about this man: He never asks for recognition, or fanfare. He just does what he committed to do,” Wilburn said in the statement. “He even convinced some of his staff to volunteer too, so now we have a whole group of volunteers that come down from his office to help.”

At the time, the White House released a video of Garland’s service as a tutor.

I imagine Merrick Garland tutoring his student right now, talking about the Constitution as well as offering tips on reading, writing, and math. I bet he could provide some special insight.

Damn you, Mitch McConnell. Damn you to hell.

1994: The Rev. Giuseppe Diana, an Italian parish priest who fought organized crime, was shot and killed while preparing to celebrate Mass in his church in Casal di Principe. Click Political murder of the day for details.