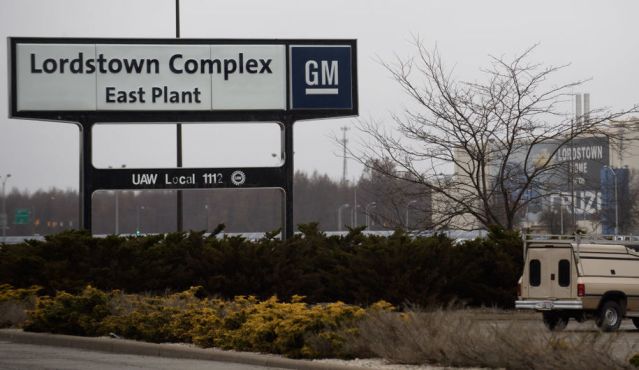 The massive GM assembly plants in Lordstown, Ohio, shut down in March after 52 years, leaving thousands of autoworkers unemployed.

Of all the ridiculous arguments Donald Trump makes for his reelection, perhaps none is repeated more often than his claim that the U.S. economy is “the greatest economy in the history of our country.”

The claim is gibberish, of course, which is why the claim (or some variation thereof) continually rates three out of four Pinocchios from The Washington Post. And one of the reasons why the claim is wrong is that the nation’s manufacturing sector is on a downward spiral.

Companies are blaming the slowdown on Trump’s tariffs on Chinese goods, which have escalated into a full-blown trade war with China as that country retaliates with tariffs of its own. According to a story from The Washington Post:

Manufacturing fell into a technical recession in the first half of the year, and the latest ISM data indicates the situation appears to be getting worse.

Concerns are rising that the contraction in manufacturing could spill over into the rest of the U.S. economy.

Even worse than a technical number from the index, numbers for manufacturing employment, new orders, backlogs, and production all fell in the Institute of Supply Management report. Because of Trump’s tariffs, parts cost more, so companies are ordering fewer of them, which also affects suppliers. In some cases, manufacturers worried about the future are laying off employees. Data from the Bureau of Labor Statistics show that the manufacturing unemployment rate went up six-tenths of a percentage point just since June, and the manufacturing sector lost 2,000 jobs in September. The official September numbers from BLS showed that U.S. employers added only 136,000 jobs.

And guess where manufacturing job numbers are bad? In Michigan, Wisconsin, and Pennsylvania, three states Trump won narrowly in 2016. Losses in those three states could very well tip the election to a Democratic challenger in 2020.

A Bloomberg opinion piece points out that Trump’s trade policies are hurting both the farming and manufacturing sectors. A 2016 manufacturing recession may have contributed to Trump’s slim win in those three states that Democrats were counting on as a “blue wall.”

Manufacturing is still a major employer in those states — think steel and automobiles — and there have been layoffs as manufacturing has weakened. Even though Trump ran in 2016 promising to revive the country’s manufacturing sector, that promise sounds more hollow as time goes on.

Trump could conceivably turn the situation around, but at this point it’s hard to see how. Even if he announced an official end to the trade war tomorrow, it would be months before farmers and businesses could be confident that he was serious. After that, there would be yet more delays before equipment orders rebounded, and still more before a rise in manufacturing employment.

The 2016 manufacturing recession likely convinced some Trump voters that he would be an economic savior and save their jobs. “Now Trump has to campaign against a similarly weak backdrop,” the Washington Post story says.

Manufacturing accounts for about one-tenth of the U.S. economy, making it less of a barometer of what’s ahead of the U.S. economy than it once was. But most analysts agree that what’s happening to manufacturing is evidence Trump’s tariffs are doing real harm to the U.S. economy and is a warning sign for what could happen to other industries, especially as the tariffs expand by the end of the year onto nearly all Chinese products.

“We have now tariffed our way into a manufacturing recession in the U.S. and globally. What’s the strategy now? It better be more than the Chinese buying more soybeans,” said Peter Boockvar, chief investment officer at Bleakley Advisory Group, in an email.

Many factors affect a manufacturing recession, of course, including the global economy. In addition to concerns about trade wars with China, indicators in Europe also are pointing in the wrong direction. A joint forecast from several of Germany’s leading economic institutes sharply downgrades predictions for that country’s economy. Add to that the uncertainty about what will happen to the economy of European countries when the United Kingdom leaves the European Union — whether it’s a no-deal Brexit or not — and the economic future looks even bleaker.

But Trump’s tariffs have screwed U.S. manufacturers more than anything else. While the tariffs initially helped the steel industry, that bump was short-lived, and now some steel plants are closing.

A story from Markets Insider explains how this slowdown is Trump’s doing:

While US manufacturing has faced separate challenges, including a broader slowdown abroad, economists said a drop in demand for new orders showed how the sector has been directly affected by trade policy.

“The continued decline in new export orders suggests that the trade war is an important source of the ongoing slowdown in the manufacturing sector,” said Torsten Slok, the chief economist at Deutsche Bank Securities.

By effectively taxing American importers, tariffs on Chinese products have disrupted global supply chains and threatened to upend trading relationships that have been built over a span of decades. Domestic jobs have been put increasingly at risk as heightened costs and uncertainty weigh on the outlook.

Trump continues to spout nonsense on how the manufacturing slump should somehow be blamed on the Federal Reserve, because … I don’t know, something to do with interest rates?

Three out of four economists surveyed by the National Association of Business Economics are predicting a recession by 2021, if not sooner, perhaps even before the 2020 election. When you add the record number of bankruptcies for Midwest farmers, the higher prices U.S. consumers will pay for goods because of Trump’s new round of tariffs, and a prediction from Agricultural Secretary Sonny Perdue that small dairy farms might not survive, remember to take Trump’s words on how great the economy is doing with mountains of salt.

← Political murder is headed to the cradle of democracy
One year after Tree of Life shooting, U.S. Jews fear rising anti-Semitism →

1952: In two days of deadly violence, 50 Egyptian policemen were killed and at least 20 people, most of them British citizens, were shot or burned to death during anti-British riots in Cairo. Click Political murder of the day for details.