#ClimateStrike: Thanks to Greta Thunberg, the kids are all right 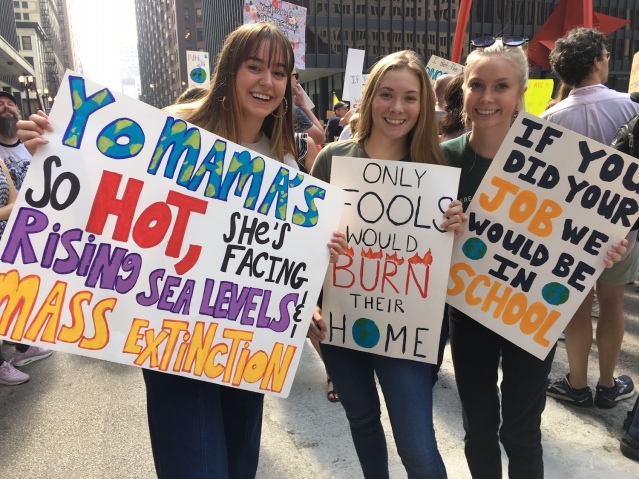 These students’ signs at the climate strike in Chicago say it all.

Among the millions of people worldwide who marched in the Global Climate Strike, the majority by far were students and young people.

“I’m missing my lessons to teach you some” was a common sentiment, along with messages seen at past rallies, such as “There is no Planet B” or “I can’t believe I have to march for science.” Some carried messages so in tune with teens that some older adults didn’t even get the references. 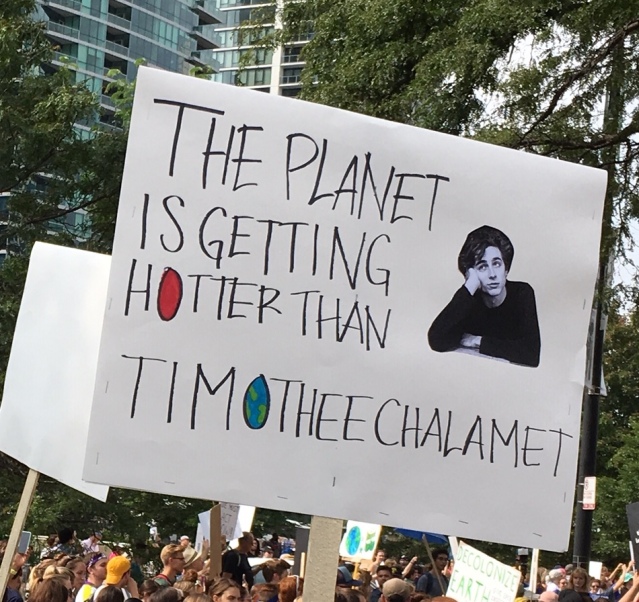 The sentiment is clear to teens, if not to all adults.

Climate activists estimate that more than 4 million people took part in climate strikes worldwide, with more than 2,500 events scheduled in over 163 countries on all seven continents. Yes, there was even a climate strike in Antarctica.

Climate change is not a possibility for the distant future, it is the REALITY OF TODAY!!! It’s time to rise before it’s too late. We support you, climate strikers. With love and hope from Antarctica.#ClimateStrike #FridaysForFuture pic.twitter.com/Z4AoIuPXWw

As a story on Vox put it, It “may end up being the largest mass protest for action on global warming in history.”

What was the motivation of all these protestors? Yes, some might have used the strike as an excuse to miss school, but their presence was so much more than that. More important, what was their inspiration?

Much of it boils down to a 16-year-old Swedish climate activist who started her journey over a year ago with a one-person protest in front of the Swedish Parliament because lawmakers weren’t fulfilling their responsibilities to fight climate change. A year later, that one-person protest grew to 4 million, and it has governments the world over listening.

As John Pavlovitz wrote in his blog, Stuff That Needs To Be Said, We Are Greta Thunberg.

Greta is also a once-in-history, never-to-be-repeated collection of dreams, struggles, doubts, joys, fears, flaws, and passions, the likes of which the world has never seen before and will never see again. … She is just one person. And one person, it turns out—is enough to turn the world upside down. …

She decided that no one was flying in from the heavens to save the day, that she would have to do something there on the ground, with the rest of the mere mortals. She pushed through the hopelessness and the fear and the endless maze of “What can I do?” questions—and she allowed herself to change the temperature of the planet.

It’s likely that the rest of us will never be as motivated or as active as Greta. However much we believe in the dire need for individuals, companies, and governments to take serious action to fight global warming, it’s hard work. But it has to be done, and we all need to be a part of it. Polls suggest that climate change is now a top concern, along with fighting gun violence, for young voters.

The only thing that makes you and me different from Greta Thunberg in this moment—is motion; her choice to do more than despair and hashtag and feel terrible.

Movement is the only thing required to renovate this world. The rest is simply the millions of ripples of that decision: the people it leads you to, the strengths you uncover, the voice you find, the lessons you learn, the paths you alter, the people you inspire.

There are so many ways to move. Let your voice be heard. Take public transportation instead of driving whenever possible. Walk or ride a bike. Cut down on single-use plastic. Reduce, reuse, and recycle packaging — or refuse to accept it in the first place. Elect lawmakers with solid plans and outlines to to take climate action, such as the Green New Deal, even if not all of those ideas make it into law.

← A Trump dynasty? Only in sales to suckers
Trump lost farm votes over his China trade war. Now climate change may cost him more. →

1 Comments on “#ClimateStrike: Thanks to Greta Thunberg, the kids are all right”