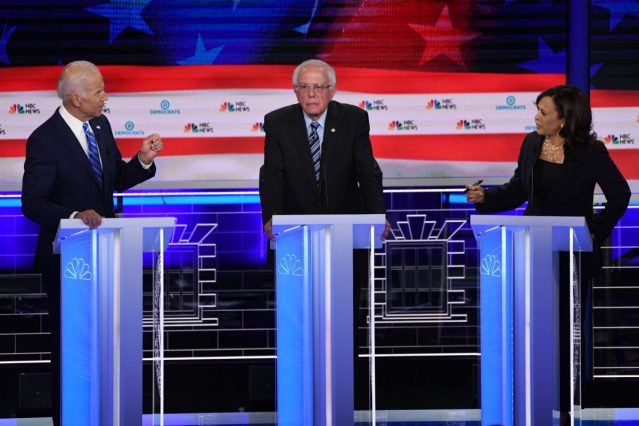 One good debate performance does not win an election, but Kamala Harris was the breakout debate star over Joe Biden, Bernie Sanders, and the other hopefuls.

With the first two Democratic debates finished, political pundits everywhere are issuing the usual “who won” and “who lost” evaluations. But there was one winner who rose above the rest — Kamala Harris.

Massachusetts Sen. Elizabeth Warren came through with her usual “I have a plan for that” workmanship. Former Housing and Urban Development Secretary Julián Castro showed why he belonged on that stage when he talked about immigration — he saw a Google surge of more than 2,400 percent after the Wednesday night debate. South Bend, Indiana, Mayor Pete Buttigieg held his own, giving a heartfelt answer about how the killing of a black resident by a white cop is affecting his community.

Some former favorites such as former Texas Rep. Beto O’Rourke seemed overmatched. Neither of the polling leaders, former Vice President Joe Biden or Vermont Sen. Bernie Sanders, had a particularly good night. With 10 candidates, and limited time to talk, it’s difficult for candidates to get all of the ideas out that they want to stress. And let’s face it: Some of the also-rans, like Marianne Williamson, Andrew Yang, Eric Swalwell, Tim Ryan, John Hickenlooper, and others, just don’t belong on that stage. Let’s hope the Democratic National Committee raises the stakes for getting into the next round of debates.

The California senator often has showed her toughness asking questions as a member of the Senate Judiciary Committee. But she took that toughness to another level on the second night of the debates. She took on Biden’s earlier comments about his history of working with segregationist senators: “If those segregationists had their way, I would not be a member of the United States Senate, and I certainly would not be a serious candidate for president of the United States.” Biden didn’t really know how to respond to her personal story on busing. The image of her as a pig-tailed young girl is now being developed into a T-shirt for supporters.

On both nights, given the number of people on stage and the need for the lower-ranked candidates to claim airtime, the Democratic hopefuls interrupted each other. Like a mom telling kids in the back seat to settle down, Harris took charge and quieted the ruckus.  “America does not want to witness a food fight, they want to know how we’re going to put food on their table,” she said as the rest of the field fell silent.

This is how the latest story giving candidates’ rankings (she’s now ranked No. 1) in The Washington Post described Harris’ performance:

The real winner this week was Harris. She had a compassionate story to illustrate every policy question, and the crowd ate it up. But Harris also was bold enough to take on the Democratic favorite headlong, and she definitely came out ahead. She didn’t spend that much time detailing her policies (reversals have dogged her in the past), but we have plenty of debates to come.

There are many descriptions of her dominance:

She was the clear standout on the stage, mixing righteous anger, biographical stories and prosecutorial toughness. She demonstrated just how her toughness and prosecutorial experience could be wielded — not just against Democrats but vs Trump. https://t.co/010D9k5c7B

Ever since Biden entered the race, he has been described by pundits as “the most electable candidate” to beat Donald Trump, and that has turned into a self-fulfilling prophecy in polls. Much of his support has been from African-American voters: Around 50 percent back Biden, according to an average of CNN polls.

After the first round of debates, that could change. Harris was mobbed after the debate, and many surrounding her were black women. A Politico story suggested that it was too early to tell how this first debate might affect African-American support for Biden, but his campaign might have reason to worry.

David Axelrod, the former strategist to Barack Obama, opined on CNN that the clash could hurt Biden with African Americans. He cited a recent poll showing Biden walloping the field with the highest African-American vote share while Harris had 12 percent.

“These kinds of exchanges can have an impact on that number, and that number is one of the reasons why he is sitting in such a strong position nationally,” Axelrod said. “So this has some perilous implications for him in this regard. On the other end of the equation, the question still remains if not him, who?”

What Axelrod failed to mention is that in 2008, black voters backed Hillary Clinton, thinking her as the inevitable and most electable candidate. Until they started voting for Barack Obama.

Harris, the former California attorney general, says she is ready to “prosecute” Donald Trump in 2020. “It was easy to imagine her utterly demolishing Trump on a debate stage,” wrote Washington Post columnist Eugene Robinson. “It was possible to imagine Biden doing the same thing, but you had to wonder.”

It’s still six months before the first votes are cast at the Iowa caucuses. There are more debates and a lot more campaigning to do before then. We won’t see new poll numbers for several days.

But in the weeks and months to come, there’s no question that “Momala,” as her two stepchildren call her, is a new force to be take seriously.

← How Trump tariffs are hurting U.S. consumers
The NRA is falling apart, one bad shot at a time (UPDATE) →