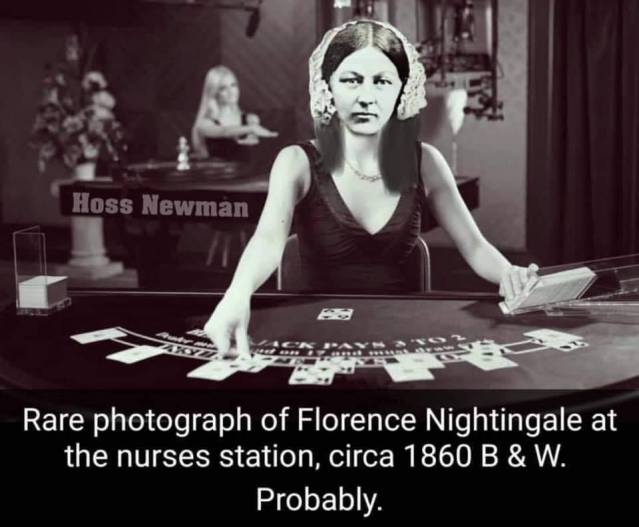 One of the many snarky and deserved responses to the remarks of a (no surprise) GOP state senator.

There’s a story out of Washington state that has nurses up in arms. A Republican (as if she could be in any other party) state senator objected to a bill giving meal breaks and rest periods for nurses, implying that they don’t have enough work to keep them busy and don’t need mandated breaks.

Never mind the fact that nurses are likely the hardest-working members of a medical team. If you’ve ever been in a hospital, as a patient or a visitor, you know that. Anyone with any brains does.

That GOP senator is facing heated backlash. The take-home message: Never piss off a nurse. From a CNN story:

A Washington state senator has drawn the ire of nurses after remarks she made suggesting that nurses in smaller hospitals “probably play cards for a considerable amount of the day.”

The Washington State Senate considered a bill Tuesday, SHB 1155, that would provide nurses with uninterrupted meal and rest periods.

“By putting these types of mandates on a critical access hospital that literally serves a handful of individuals, I would submit to you those nurses probably do get breaks. They probably play cards for a considerable amount of the day,” Washington state Senator Maureen Walsh said on Tuesday during a debate on the Washington state Senate floor.

Nurses in Washington state are not taking this lightly.

The Washington State Nurses Association called Walsh’s remarks “demeaning” and said there is “zero logic” in covering nurses in some hospitals, “while leaving others without any protections.”

“No, Senator, nurses are not sitting around playing cards. They are taking care of your neighbors, your family, your community,” Mathew Keller, WSNA’s director of nursing practice and health policy, said in a post on the union’s website.

The bill passed the Senate (it had earlier passed the House), with Walsh voting against it. It will go back to the House to approve some amendments before it goes to Gov. Jay Inslee for his signature.

But nurses aren’t done with Walsh yet. From the executive director of the National Nurses Union, via a story on Crooks and Liars:

Trust me, nurses haven’t earned the title "most trusted profession" for seventeen years running by "playing cards" on our shifts. WA Sen. Maureen Walsh should be ashamed to use #nurses to score cheap political points like this. #1U #nurseslife pic.twitter.com/ucm89ezpDj

Comedian Kathy Griffin, whose mother is a nurse, also weighed in:

Dear #maureenwalsh, Representative from Washington State,
Thank you of alerting me to a group that even I am not stupid enough to piss off. Ever. ps. My mom, Maggie Griffin, worked in a hospital for decades. #NursesDeserveaBreak #nurses pic.twitter.com/ZcGarPTZzp

Nursing groups are publishing Walsh’s contact information so they can make their feelings known. They also are suggesting that nurses send Walsh a deck of cards. From a nursing FB group: ATTENTION ALL NURSES:  Please mail Senator Maureen Walsh a deck of cards.  The address is: 504 15th Ave SW, Olympia, WA 98501

In her case, it shouldn’t be a full deck.

UPDATE: After a national outcry from nurses, Walsh was forced to apologize for her comment and said she would be “happy to accept” the invitation to shadow a nurse during a shift. Walsh’s office had been inundated with on online petition with 650,000 signatures and with phone calls, emails, and (yes) packs of cards from nurses in protest.

← My #MuellerReport take-home message: Trump is guilty of obstruction of justice
#Election2020: Who’s got policies? Who’s got platitudes? →

1961: Herbert Lee, a civil rights activist working to register Black voters in Mississippi, was shot and killed by a pro-segregationist state legislator. Click Political murder of the day for details.