When politics and sports collide: Why I am no longer a Cubs fan 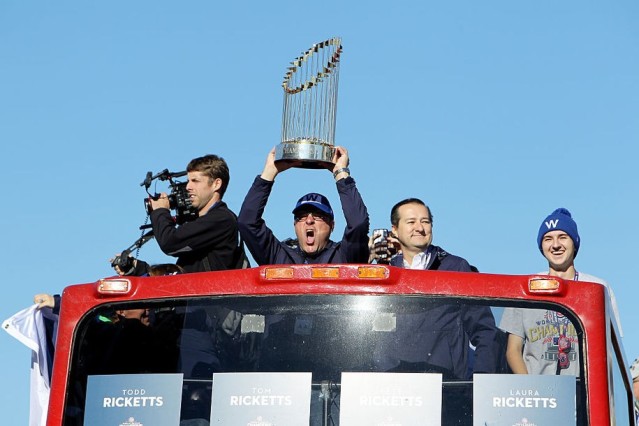 Joe Ricketts hoisted the Chicago Cubs’ World Series trophy at a 2016 victory parade. But his history of GOP activism, racism, and anti-Muslim bashing has turned me off to the team.

Fan loyalty is often passed down in families. If you grew up watching and going to baseball games with your parents, like I did, chances are you developed the same love for a team and consider yourself a lifelong fan.

But when it comes to the Chicago Cubs and me, it’s over. I no longer will bleed Cubbie blue.

We can accept the fact that most owners of professional sports teams tend to be conservatives. We likely don’t vote the same way, and we probably make donations to different political causes and candidates. We’re willing to pay too much for tickets, food and beverages at the ballpark, and official fan merchandise, especially if our team is winning. And we hate the way taxpayer dollars are used to build new stadiums for billionaires even as they claim that they hate big government.

If you love your team, you often turn a blind eye to what you loathe about the owners. When New England Patriots owner Robert Kraft was charged with soliciting a prostitute, Pats fans, still thrilled after another Super Bowl win, reacted with a basic, “Meh.”

But the latest news about the family that owns the Chicago Cubs is too much. Joe Ricketts’ hateful, anti-Muslim emails, recently unearthed and published, were disgusting. The plan to launch an exclusive Cubs TV channel in partnership with the conservative Sinclair Broadcasting Group in 2020, forcing fans to pay a higher cable bill to watch the team, was the last straw.

Joe Ricketts made his fortune as chairman of the brokerage firm TD Ameritrade. His family — mostly with his money — bought the Chicago Cubs in 2009. Joe Ricketts is not directly involved in running the team — that assignment goes to son Tom Ricketts, who is Cubs chairman. Three other Ricketts offspring — Pete, Todd, and Laura — are on the board and are co-owners of the team.

The politics of the Ricketts clan runs the gamut — patriarch Ricketts is a GOP mega-donor and staunch conservative. As for the Ricketts siblings: Pete Ricketts is the GOP governor of Nebraska. Todd Ricketts is finance chairman of the Republican National Committee and will oversee fundraising for Donald Trump’s reelection efforts. Tom Ricketts describes himself as a political moderate. Laura Ricketts, a board member of Lambda Legal Defense and Education Fund and the Housing Opportunities for Women organization, is a liberal who was a top fundraising bundler for President Obama in 2008 and 2012. She also is the first openly gay owner of a Major League Baseball team.

Except for Laura and perhaps Tom, they’re an ultra-conservative bunch. They donated heavily in support of Scott Walker in 2016 until they switched to Trump, while Laura held fundraisers for Hillary Clinton.

In 2012, Joe Ricketts gained notoriety when news leaked that he was considering spending $10 million on a super PAC to run a stealth campaign against Obama that would feature the racially incendiary sermons by Rev. Jeremiah Wright, the minister at a Chicago church Obama once attended. The plan was dropped once the word got out, but Chicago Mayor Rahm Emanuel was so incensed that the negotiations for the city to pay for renovations at Wrigley Field died.

A personal note: NPR did a story on Joe Ricketts after that story broke in 2012, painting him as a small-government conservative who hated big government spending. The story even let Ricketts identify himself as an independent. I was so incensed I sent a letter to NPR that actually got read on the air:

Brian Naylor left out a crucial part in his story about Joe Ricketts and his super PAC formed to defame President Obama. Like many Republicans (independent, my eye), Ricketts claims to hate big government spending. Yet the first thing he did after buying the Chicago Cubs was to ask for money from the state of Illinois and the city of Chicago for tax breaks to renovate Wrigley Field. He hates government spending — except when it’s for HIM.

The Cubs broke my heart in 1969, 1984, and (especially) 2003. I am a lifelong Cubs fan and have gone to countless games throughout the years. But I will never set foot in Wrigley Field again. This jerk broke my heart in a way that was even worse than the Cubs bullpen.

That was the first major crack in my Cubs fandom. I did stay away, only going to games when friends visited from out of town and wanted to see a Cubs game. But the Cubs — and their legendary bad bullpen — were improving.

In 2016, the entire town (myself included) went crazy when the Cubs broke a 108-year drought and won the World Series. I was back in the fold, singing Steve Goodman’s “Go Cubs Go” at the end of every win. So what if they didn’t repeat? The Cubs were champs, and my parents were looking down and smiling.

Then came the emails by Joe Ricketts published on Splinter News. Many referred to a supposed video of Obama claiming to be Muslim. Others spewed misinformation about Sharia law and Islam in general, calling it a cult. There were racist jokes and conspiracy theories. All of it was the stuff that crazy uncles email after they hear it from Rush Limbaugh or on Fox News. “Go USA — kick their raghead asses,” said one email. It all went downhill from there.

Ricketts tried to undo the damage with a post on his personal site. “I deeply regret and apologize for some of the exchanges I had in my emails. Sometimes I received emails that I should have condemned. Other times I’ve said things that don’t reflect my value system. I strongly believe that bigoted ideas are wrong.”

Talk about too little and too late.

Cubs Chairman Tom Ricketts tried to contain the damage. According to a report in USA Today:

His son, Cubs Chairman Tom Ricketts, called the father’s emails “racially insensitive” and said “the language and views expressed in those emails have no place in our society.”

He also sought to distance his father, a longtime backer of conservative politicians, from the baseball franchise, one of baseball’s most valuable and iconic Major League teams.

“My father is not involved with the operation of the Chicago Cubs in any way,” Tom Ricketts said in a statement. “I am trusted with representing this organization and our fans with a respect for people from all backgrounds. These emails do not reflect the culture we’ve worked so hard to build at the Chicago Cubs since 2009.”

Kamran Hussain, president of the city’s Muslim Community Center and 15-year season ticket holder, wrote a letter to the Ricketts family Tuesday in which he said the Cubs response had “fallen short and has the ring of PR or ‘damage control’ for most Muslims and others of good conscience in Chicago.” Hussain urged the Ricketts family to meet with Chicago Muslims to clear the air.

As bad as all this is, there’s also news that will hit fans in their wallets. The Ricketts will launch the Cubs’ new TV network, called the Marquee Sports Network, in 2020 in conjunction with Sinclair Broadcasting. It’s the end of seeing Cubs games for free, and how can there any doubt that Sinclair will try to put its conservative spin on the new channel?

We all know that owning a professional team is a business, and businesses are in it for the money. The Ricketts family jacked up ticket prices when they poured a ton of money into Wrigley Field renovation and expansion, battling the city all the way. The Cubs opposed the reelection of Tom Tunney, the alderman whose ward contains Wrigley Field and who has challenged their expansion plans. Too bad for them — he was just reelected.

Will any of this matter to a diehard Cubs fan? Likely not, said Phil Rosenthal of the Chicago Tribune:

The Cubs and the Ricketts family, which owns them, want a lot these days.

They want a new 44th Ward alderman because they want to be able to expand and profit from their Wrigleyville empire with fewer constraints.

They want people to shell out for a bigger monthly cable bill after this season because they want their own Cubs TV channel.

Now they want people to ignore the racist jokes, fanciful conspiracy theories and out-and-out Islamophobia found in the emails of Joe Ricketts, the billionaire patriarch who bankrolled his family’s 2009 purchase of the ballclub.

They may not get what they want, the Rickettses and the Cubs, but one can’t help but suspect fans are unlikely to hold any of their requests against them in the long run.

That’s the thing about sports fans in general, and especially Cubs fans. The customers are loyal beyond reason. If losing didn’t shake them, what will?

Consider me shaken. Chicago Cubs, you are dead to me. At least until Javier Baez, Kris Bryant, and Anthony Rizzo lure me in again…

3 Comments on “When politics and sports collide: Why I am no longer a Cubs fan”