2020 electorate will be more diverse than ever 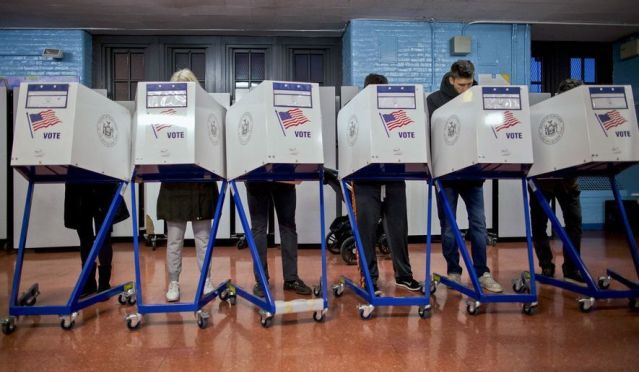 Whether they differ by gender, age, ethnicity, or partisan leanings, next year’s voters will be more varied than ever before.

The growing number of Democrats running for president in 2020 are a diverse group of candidates. But they won’t be as diverse as the people voting for them.

According to projections from the Pew Research Center, a higher number of those who will cast votes for president next year will be younger than their counterparts in past presidential election years. There will be more eligible Latinx than African-American voters. And because of an increased number of naturalized citizens, one in ten voters will have been born outside the United States.

Nonwhites will account for a third of eligible voters — their largest share ever — driven by long-term increases among certain groups, especially Hispanics. At the same time, one-in-ten eligible voters will be members of Generation Z,  the Americans who will be between the ages 18 and 23 next year. That will occur as Millennials and all other older generations account for a smaller share of eligible voters than they did in 2016.

These projections from Pew — long considered the gold standard of polling research — are just that, based on demographic trends. But if the 2018 midterm election taught us anything, it taught us that conventional wisdom about certain voting habits and voting trends from past elections don’t necessarily apply anymore. The old polling models of who votes and in what numbers need a major overhaul.

Too bad pundits — and some candidates — haven’t learned that lesson.

It’s perfectly fine and even logical to look at traditional factors when trying to decide what voters are looking for in a 2020 presidential candidate. Although no one can predict who will show up on Election Day in 2020 (and who will cast ballots in the growing number of states with early and mail-in voting), exactly who those voters will be seems to be the most important factor of all.

Nevertheless, voter turnout in 2018 delivered some clues on new voting habits, and the voting shifts are worth noting. Voter registration surged in several states with key races, especially in the number of new young voters up to age 40. Much of that upsurge came after the mass shooting at Marjory Stoneman Douglas High School in Parkland, Florida, one year ago.

These factoids are from a compilation story by Bloomberg on voter numbers:

Lots of factors can weigh on whether someone votes, but the biggest reason for high turnout in 2018 likely has more to do with the national political climate than local races and candidates.

“The obvious explanation is Donald Trump,” said Michael McDonald, associate professor of political science at the University of Florida who also runs the United States Election Project. “That really spurred an interest in politics—and whether you love him or hate him, you’re showing up to vote because you want to have your say.”

While it’s true that members of Trump’s base wanted to have their say, an even greater number of those who disapprove of Trump wanted to have their voices heard. We’ve seen these voting results reported many times since November 2018, but if you voted then, you probably will vote in 2020. According to another set of data from Pew Research about 2018:

Probably the most important fact of all from Pew — because first-time voters are often given less weight in polling — “Among voters who said this was the first midterm in which they voted, 62% favored the Democrat and just 36% supported the Republican.”

So who will be the voters in 2020, and where will they come from? Here are more observations from Pew Research on the likely 2020 electorate and how they might vote:

Probably the most interesting — and potentially most significant — projection from Pew:

Post-Millennials are on track to be more racially and ethnically diverse than their predecessors: In 2020, Gen Z eligible voters are expected to be 55% white and 45% nonwhite, including 21% Hispanic, 14% black, and 4% Asian or Pacific Islander. By comparison, the Boomer and older electorate is projected to be about three-quarters white (74%).

Nate Silver of FiveThirtyEight.com recently joined former Obama economic adviser Austan Goolsbee at a forum at the University of Chicago Institute of Politics. Goolsbee, who teaches at U of C, and Silver, an alumnus, discussed predictions about 2016 and 2020. Silver still defends his 2016 work, since he said he gave Donald Trump a better chance of winning than other outlets. Yet for his 2020 predictions, he sees no reason to revamp his analytical model. “Not only do I think that adjustments are unnecessary, I think it’s the wrong thing to do,” Silver said. His current predictions are “even money” for a Trump reelection with a slight edge to California Sen. Kamala Harris to be the Democratic nominee. (Way to go out on a limb, there, Nate!) He further predicted a “messy election” and “trench warfare” in the Democratic primaries, despite the fact that most of the declared candidates enjoy collegial working relationships.

But after the 2018 election, how can anyone say that analytical models don’t need adjusting? The sheer number of women candidates and voters made up a very different electorate than past numbers would suggest. Almost every subgroup of women in CNN’s national exit polls moved towards Democrats, CNN reported days after the midterms. Those groups included white women, Latinas, white college-educated women, white non-college-educated women, Democratic women, and independent women. The percentage of black women voters — traditionally the most reliable Democratic voters of all — stayed about the same.

Voters do appear to have been extra-engaged in 2018, and how that will translate over the next couple of years remains to be seen.

“Trump’s not going away in 2020,” McDonald said. “I wouldn’t be surprised to see record turnout.”

Any candidate who takes any voter for granted as we approach 2020 might find himself or herself on the losing end of an election — if he or she is on the ballot at all. Pundits who predict that “this is what voters are looking for” (as Politico did in a “How to Choose the Most Electable Democrat in 2020” piece) might as well turn in their laptops.

When “crazy socialist” ideas such as Medicare for all, greatly increased taxes on the wealthy, an ambitious climate action plan like the Green New Deal, and common-sense gun laws such as universal background checks are getting high support from voters, all bets could be off.