Lessons from the midterms: Count every vote 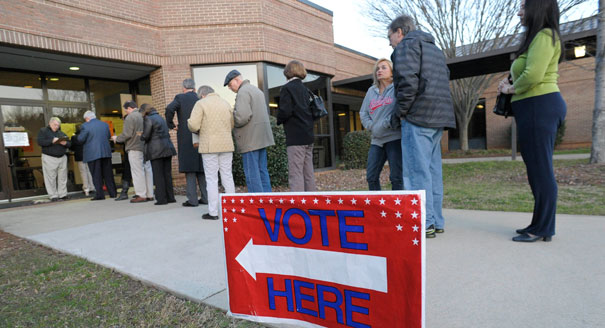 Election season lasts a long time. Why not wait a little longer until all the votes are in?

Republicans seem to have come up with a new strategy to win elections when gerrymandering and voter suppression aren’t doing the trick — just don’t count all of the votes. We’re seeing some of these arguments play out in Florida, Georgia, and Arizona.

Americans are impatient to a fault. On any given Election Day, we want to know the results almost as soon as the polls are closed. And many news organizations fulfill that urge, giving projected winners in some states almost immediately.

Many of those projections are based on exit polling, and in many cases, those projections hold up. For instance, in the midterm elections on Nov. 6, every news organization was justified in reporting that Massachusetts Sen. Elizabeth Warren had won reelection just moments after the polls closed, and that expected result came true. After all, she had been given a higher than 99 percent chance of reelection by FiveThirtyEight.com. On the evening of the election, with 88 percent of the votes counted, public radio station WBUR reported that she had won 61 percent of the vote — an insurmountable lead.

Note that there was only 88 percent of the vote counted. While the outcome of that particular contest wasn’t in doubt, the outcomes of other races around the country where votes are still being counted are in doubt.

Many Americans vote by visiting their polling places on Election Day. As states change voting practices, more and more voters are voting early, voting absentee, voting by mail, and voting by dropping off their ballots in secure vote collection boxes. All of those methods make it much more convenient for voters to cast ballots and increase the percentage of people taking part in elections. They don’t have to wait in line for hours, as many voters did in Georgia this year. The downside is that all of those voting methods add to the time it takes officials to count votes.

To which we should say, so what? What’s the rush? The new Congress isn’t sworn in until January, and state officials don’t take office until then, either. It’s more important to get it right than to get it quickly.

Three states — Washington, Colorado, and Oregon — do all of their voting by mail. Many states have expanded their use of absentee ballots. As long as a mailed-in ballot is postmarked on Election Day, it counts. But those mailed-in ballots must be gathered and tabulated — a process that can take weeks. Voters in states with a lot of voting by mail are used to the process and know that tight races won’t be decided right away.

But many of the Republicans in these races want to be declared the winners — now. If officials are still counting votes, they claim, it must be voter fraud, which only exists in the mind of the GOP.

Part of the trouble is how the two parties’ voters are distributed. As Josh Marshall writes at Talking Points Memo:

Democrats are concentrated in large urban counties. Almost everywhere in the country, these counties take longer to count the vote than more sparsely populated exurban and rural areas. That’s hardly surprising. It’s not new. We’re seeing it in Arizona and Florida. In fact, we’re seeing it across the country. It’s just that those are states with Senate and governors races that remain undecided. If you stop counting the votes before the blue regions are done counting, that obviously helps the Republican candidates quite a lot. That’s exactly what Rick Scott is trying to do as of last night, just much more openly and brazenly than even Republican candidates have done in the past.

Rick Scott, the outgoing governor and would-be senator, and his allies are declaring the election over. Donald Trump is on one of his tweet-rampages about election “fraud,” claiming that Democratic election officials must be “creating” votes. Scott’s campaign is even suing officials in two Florida counties, arguing that “unethical liberals” are trying to steal the election.

Absentee ballots get checked against voter lists by hand, which is time-consuming. The trouble is, disproportionate number of votes cast by younger and minority voters get rejected, according to a report by the ACLU and Dr. Daniel Smith, chair of the Department of Political Science at the University of Florida and President of ElectionSmith. Smith is one of the nation’s leading experts on voting and election administration.

“By contrasting the rates of rejected VBM [vote by mail] ballots in the 2012 and 2016 Presidential election, we found that younger and racial and ethnic minority voters casting VBM ballots were at least twice as likely as older and white voters to have their VBM ballot rejected,” stated Dr. Daniel Smith. “With this revealing information, we need to work towards ensuring all Florida voters’ ballots are counted regardless of the method they choose to vote.”

Needless to say, younger and minority voters tend to vote for Democrats more. Democratic Sen. Bill Nelson has filed a lawsuit of his own, challenging the state’s “signature match” law.

The state of Georgia became Ground Zero in voter suppression this year, with gubernatorial GOP candidate Brian Kemp also in charge of elections in his role as secretary of state. During his time in office, he has purged some 1 million voters from the rolls, mostly by enforcing a “use-it-or-lose-it” law for voters who hadn’t cast a ballot recently. He also rejected 53,000 voter applications because of the state’s “exact-match” law, in which an application can be rejected for any difference between the name on the application and a name on a government data base, even if that difference is as small as a hyphen. In addition, there are still thousands of uncounted provisional ballots all over the state, which Kemp doesn’t want counted. His opponent, Democrat Stacey Abrams, obviously does, and a federal judge has ordered that the tally of statewide provisional ballots be disclosed, mainly to see how that total compares with previous elections. Even though Kemp leads and has declared himself the winner, there could be a runoff election if the vote totals change and Kemp’s lead drops below 50 percent.

In Arizona on Election Night, it looked like Republican Martha McSally was winning over Democrat Krysten Sinema. But since three-quarters of Arizonans vote by mail, much of the vote was still outstanding. Several days later, the lead has flipped, Sinema is in the lead, and there were still half a million votes to be counted in the state. Republicans figured that their only hope to squeak out a McSally win was to file a lawsuit asking that the outstanding votes not be counted. UPDATE: Now state Democrats and Republicans have agreed on a strategy that could help both candidates: Voters whose signatures on absentee ballots caused those ballots to be flagged will have a chance to “cure,” or verify, those votes up to five days after Election Day. That will hold true in both urban and rural areas of Arizona.

When we hear news of elections in other countries, the news reports usually say that “we might not know the results for a few days.” The population doesn’t freak out — they just wait.

It’s time that Americans — and especially GOP candidates — learned to wait as well. Count every vote.