#Midterms2018: Women are ready to win the fight 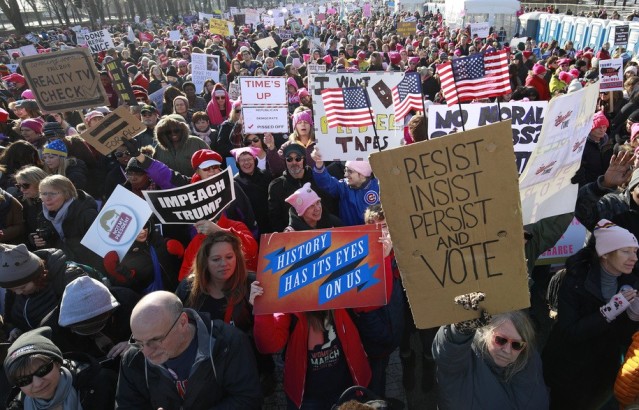 Millions of women woke up after the 2016 election, and they’re not going back to sleep again any time soon.

Ever since November 2016, women in this country have learned what it really means to be resilient.

That resiliency started with multiple protests post-election, with large crowds chanting that “Love Trumps Hate.” It came to a crescendo with two Women’s Marches a year apart, both numbering several million participants in cities and towns, large and small, across the country and around the world. Besides the anger against Donald Trump and the thousands of pink pussy hats (not to mention the truly excellent signs), the focus of all of those marches was threefold:

Most important, all of that resiliency ratcheted up the political involvement of women across the country as they realized that they, too, had a choice to make to involve themselves in the political process. Resiliency, it turns out, is contagious.

After Hillary Clinton’s loss in 2016, many of us worked through the five stages of grief. There was initial denial (this can’t be happening), anger (are you KIDDING me?), bargaining (I’ll trade a loss for a Senate seat if it means a Clinton win), depression (oh, was there a lot of depression) and acceptance (my God, this lying, pussy-grabbing Orange Menace is actually going to be president).

But there’s a sixth stage that we’ve reached, and we reached it quickly. It’s the stage of picking yourself up and bouncing back, stronger than ever.

How do we know women have bounced back? In 2016, the political action committee Emily’s List attracted interest from 920 women who considered running for office. In the two years since, the number of women who contacted the organization, which helps to elect pro-choice Democratic women, kept growing and growing. Emily’s List now reports that the grand total of interested women candidates for this election cycle has skyrocketed to an eye-popping 42,000. Out of that total, over 5,000 women received training on running for office.

Not all of them ended up on a ballot, and some of them ran against each other. They ran at all levels, from school boards to library boards to state offices (both for legislatures and for governors’ mansions), and for the House and Senate.

Besides this election, Emily’s List is concentrating on Focus 2020, which aims to shift state legislatures and governorships to Democrats to make drawing up new congressional districts fairer in 2021. A good head start on that is the 43 state legislative seats that already flipped from red to blue since Trump took office.

Even the women who chose not to run for office got involved in multiple ways. They became part of the resistance. They joined Indivisible chapters all across the country. They swelled the ranks of Moms Demand Action groups in communities across the U.S. to fight for common-sense gun legislation. They have become more politically active, volunteering for campaigns, attending town halls, and calling and writing their representatives. The movement is being described as the pink resistance, or the pink wave. As Jennifer Rubin wrote in The Washington Post: “I suspect that 2018 will be the first election, but certainly not the last, in which brigades of women, spurred by righteous anger, play a role far weightier than their numbers would suggest.”

Not all of the women candidates are going to win. Some are facing uphill fights in red districts in red states. We won’t know the results of this election until all the votes are counted, which, in the case of some tight House races in California, could take a few weeks, after all of the mailed-in ballots are received. With so many close races, it’s possible that too many Democrats could end up in the just-missed-it category. There are many wonderful Democratic candidates who will fall short and whose campaign supporters will end up deeply disappointed. And Democratic candidates and voters face more entrenched voter suppression tactics than ever before.

But many signs point to sweet, satisfying victories. Traditionally, more women than men turn out to vote, and the voting gender gap between men and women could be record-breaking, all to Democrats’ favor. Democratic turnout was way up in this year’s primaries. Donations to Democratic candidates also reached new highs, many from a record-high number of women donors.

The blog Margaret and Helen (everyone’s favorite octogenarians) is written by two feisty women in their 80s who have been “best friends for 60 years and counting.” After the 2016 election, they issued a call to arms that rings just as true today as it did in November 2016:

They say Trump woke a sleeping giant, but maybe that giant didn’t wake up before the election. Maybe it woke after the election when we all finally realized that everything we hold true and dear about this nation can indeed be taken away. Maybe, just maybe, the sleeping giant is actually the millions who trusted in hope and love instead of those who walked into a polling booth and secretly voted for hate and fear. …

My favorite ad of this election cycle (and there have been many terrific ones) is “Women Rising,” a kick-ass video of eight Democratic women running for the House in six states. They are military veterans who served in combat. They flew fighter jets. They commanded troops. They worked for the CIA. They worked in the White House.

Let’s not wake up disappointed Wednesday morning. Let’s get this done.

← The heroes fighting voter suppression
Lessons from the midterms: Count every vote →