The #BlueWave surge where it really counts: voter registration 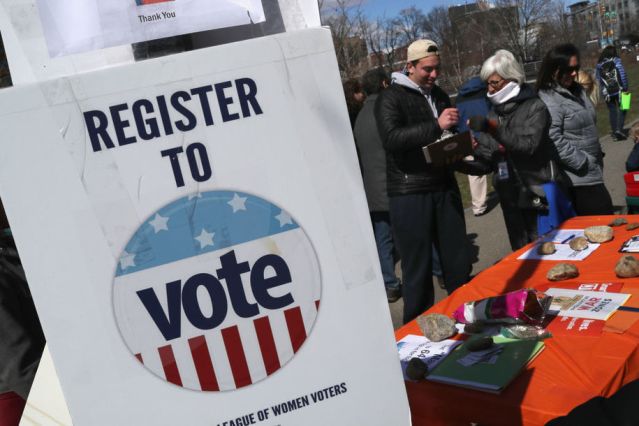 Besides the focus on fighting gun violence, the March For Our Lives stressed voting and voter registration. It sounds like people listened.

There are four weeks to go until the midterms, and the biggest thing Democrats have in their favor is the huge growth in voter registration.

A new Gallup Poll shows that voter enthusiasm is high on both sides, even though Democrats still have the edge — 61 percent of Democratic voters are enthusiastic about voting on Nov. 6 compared with 58 percent of Republicans. The generic congressional ballot polling has favored Democrats the entire election cycle, rising and dipping every now and then but usually staying within a seven- to ten-point margin. Most major polling firms predict a Democratic House with a much closer overall Senate contest. Many races remain tight, and there’s no way of predicting how the confirmation of Brett Kavanaugh to the Supreme Court will affect votes — polling is limited and varied, although on the whole, it seems to be energizing Democrats more than Republicans.

But since polling outfits always use their historical models for measurement, one key element many might be missing is the growth in voter registration, especially the growth in the registration of young voters.

An NBC analysis with the headline, “Voter registration data suggests Democrats’ longed-for ‘blue wave’ will crash over Republicans in November,” reports on a surge in several states’ registration numbers. The details all seem to be pointing in Democrats’ favor, both by age and by party affiliation.

Unmentioned in the debate over who will vote and in what numbers has been voter registration data, which provides a solid glimpse into the mindset and enthusiasm levels of Americans heading into November’s midterm elections. Compiling publicly available data from several states in the nation over the past month shows results that should deeply concern Republicans: Several states with key races are showing a noticeable surge in voter registrations when compared to prior midterm election cycles.

There’s no guarantee that new voters will actually show up at the polls or that they’ll vote for Democrats. But combine these new voter numbers with the higher turnout for Democrats in most state primaries, more political engagement by Democrats this election cycle, and the fact that Democrats have a definite edge with younger voters, having so many new—and younger—voters is one more sign that many races could end up tipping to Team Blue.

National Voter Registration Day was established in 2012 as the fourth Tuesday of September. In 2018, the Twitter-designated #NationalVoterRegistrationDay was in full gear, and the results didn’t disappoint.

Nonprofit VOTE, an organization that partners with America’s nonprofits to help the people they serve participate and vote, coordinates National Voter Registration Day. Organizers were expecting maybe 400,000 or 500,000 new voters, tops. “I think it’s a sign of the interest in the midterms and the interest in having this unified day of action,” Brian Miller, the group’s executive director, told TIME Magazine. More than 4,000 partners throughout the country, from national associations of election officials to companies to community organizations, used social media and the traditional approach of volunteers with clipboards to attract and register new voters.

The number of new young voters is impressive. It stands to reason that many new voters come from the younger ranks, because they’re finally old enough to vote, but these numbers are beyond normal registration figures. An analysis from TargetSmart, a Democratic polling firm, says the upswing came mostly after the mass shooting at Marjory Stoneman Douglas High School in Parkland, Florida, at which 17 people were killed. The fact that the Parkland survivors involved with the March For Our Lives movement crisscrossed the country registering voters helped the numbers greatly, adding “Vote For Our Lives” to their focus.

The state-by-state analysis shows that younger voters are poised to have an outsized impact in key battleground races. Pennsylvania – which has November elections for U.S. Senator, Governor, and many critical House races – has seen youth voter registration surge by 10 points after the February 14th Parkland shooting. Youth voters make up nearly 60 percent of all new Pennsylvania registrants.

Other states with critical elections that may decide control of the U.S. Senate and House also showed large increases in youth registration, including Arizona (+7.6 point increase), Florida (+7.9), Indiana (+6.8), Michigan (+7.5), Wisconsin (+5.7), and New York (+10.7). The increase in new youth voter registrants in North Carolina is 8 points higher in 2018 than in 2014; a majority of states have seen at least modest, if not significant, increases in youth voter registration rates compared to 2014. This spike in voter registration activity comes on the heels of the grassroots movement to address gun violence issues. …

The increased registration rates among young voters outpaces all other age groups in almost all states.

The NBC analysis as well as other sources give further examples of voter registration growth in several states, and how the new voters are trending younger:

Colorado sees a surge in new young voters. Of the more than 97,000 new voters added to the rolls between January and August (a 233 percent increase over the number of added voters in 2014), more than 50,000 of them, or 52 percent, were between the ages of 18 and 40. “And the Republican Party not only saw the total number of registered voters in the state decline, but particularly among women 18-40,” the analysis pointed out. Figures are from the voter statistics website of the Colorado Secretary of State.

Virginia is likely to continue Democrats’ winning ways. After the successes of 2017, when Democrats took the governor’s mansion and nearly recaptured the House of Delegates, there is another surge in voter registration. Of the more than 172,000 new voters in 2018, more than 106,000 are 35 and under. Figures are from the Virginia Dept. of Elections.

Younger voters now outnumber older ones in Pennsylvania. A New York Times story on the young voter surge gave that startling statistic, along with the fact that young Democrats outnumber their Republican counterparts by more than 400,000 statewide (a margin not true in every county). “Pennsylvania residents who are younger than 30 years old now make up nearly two-thirds of new voter registrations,” the Times reported.

California voter registration hits new record. The California Secretary of State reported that an additional 1.5 million new voters have been added since 2014, reaching a total of 19 million voters. Factors such as pre-registration for 16- and 17-year-olds helped — more than 200,000 have pre-registered since 2016, and 104,000 of those teens are now 18 and eligible to vote this year. There are 3.6 million more Democrats than Republicans.

Youth registration jumps in Florida. After the Parkland shooting, youth voter registration went up 41 percent in the state. Florida added more new voters (around 600,000) since 2016, for a total of over 13 million, but the state’s population keeps growing, too. Registered Democrats there still outnumber Republicans, but the margin remains basically unchanged.

Arizona is getting less red. Registered voter totals in Arizona still tilt Republican, but Democrats are catching up. “For every person who registered since March with the GOP, the Democratic Party registered more than three,” according to a story at Tucson.com. The voter breakdown is 34 percent Republican registered voters, 31 percent Democratic, and the rest is a shrinking number of independents.

How about Texas? Polling between incumbent Republican Sen. Ted Cruz and Democratic challenger Beto O’Rourke has narrowed substantially. So the report that an additional 1.6 million voters have registered since the 2014 midterms has to be welcome news for the O’Rourke team. According to an AP story reported through a Houston TV station, Texas has seen a 400,000-voter increase since March (Texas added an average of slightly over 100,000 voters a year between 2002 and 2014). Texas is traditionally a low-turnout state, and Hispanics in Texas historically vote in smaller numbers than their population in the state might suggest. So turning out those Latinx voters is key to an O’Rourke victory. A new wrinkle: The state has used a vaguely worded law to invalidate 2,400 online voter registrations, all in predominantly Democratic counties.

How about elsewhere? Other states are seeing less of a surge in new registrants:

At this point, many states have only raw data for voting totals, so it’s hard to tell where they are.

The NBC analysis quotes Pew Research data that 62 percent of millennials are planning to vote on Nov. 6, up from 46 percent in 2014 and 39 percent in 2010. “The level of enthusiasm among all other generations remained stagnant for these three election cycles,” NBC said. The analysis concludes:

While voter registrations do not guarantee voter turnout, they are certainly indicative of enthusiasm heading into the midterms. Circumstances can always change before people head to the polls but, 36 days out from the election, Democrats and independents are equally, if not more, enthused than Republicans. The party cannot rely on their opponents’ supporters simply staying home.

Despite President Trump and his base’s sclerotic insistence that a blue wave isn’t real, the voter registration data clearly demonstrates a far more engaged electorate that is likely to break for Democrats. Further, of the 106 House seats ranked as competitive by Cook Political Report, 93 currently belong to Republicans. These all reveal that Democrats in are in very strong position to take back the House of Representatives.

All of the polls and data show that voters are not registering to vote in order to make their voices heard, but rather deliver a primal scream of rage to President Trump and his fellow Republicans.

October 9 is the final day to register to vote in several states, although a few have later deadlines. While I suspect that anyone reading this is already registered to vote, some of your neighbors, co-workers, relatives, and friends may not be. You can direct them to any of the numerous online voter registration sites available; 38 states allow online voter registration, and those state-specific sites can be found by Googling. Here are just a few general online registration sites, which also will direct people to their state sites: Rock the Vote, Vote.org, and the March For Our Lives voter site, which also sponsors #TurnoutTuesday to boost voter engagement.

As David Hogg, the Marjory Stoneman Douglas alumnus who is taking a gap year before college to be a gun safety and voting activist, always tweets: “The young people will win.”

← The soaring cost of climate change, especially for the U.S.
2018 voting gender gap is becoming an abyss →

1971: Wasfi al-Tal, the prime minister of Jordan, was shot and killed during a visit to Cairo, the first victim of the Black September unit of the Palestine Liberation Organization. Click Political murder of the day for details.