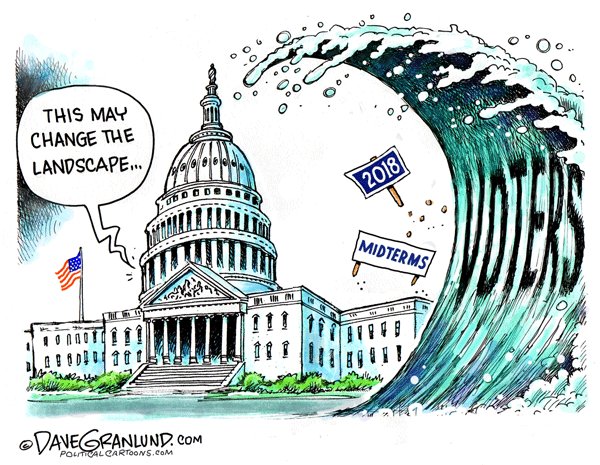 With the midterm elections less than four months away, it’s time to note the growing number of signals showing evidence of likely Democratic victories on Nov. 6.

More and more estranged Republican pundits are calling on voters to reject Republicans and vote for Democrats in this year’s midterms, including Steve Schmidt, Max Boot, George F. Will, and Joe Scarborough and friends on MSNBC’s Morning Joe. The list is only likely to get longer, even if those GOP pundits end up returning to the fold post-Donald Trump.

Yet their influence is likely limited and is being dismissed as sour grapes by many Republicans. It’s also seen as a case of “what took you so long” by Democrats.

A deeper look at polls showing who has been voting in special elections since Trump took office and in 2018 primaries gives a clearer picture — 43 state legislative seats have flipped from red to blue, and Democratic turnout in primaries is up overall, even while Republicans in some states also are energized.

There’s still a lot of time until Nov. 6, and given the ever-changing news events and wild unpredictability of what Trump will do or tweet about on any given day, who knows what we’ll be talking about on Election Day? The Senate is still an uphill battle, but many say a Democratic takeover of the House could be likely.

It all depends on which story you read, even on the same day. Is it Democrats strengthen hand in seeking control of House or Is the blue wave crashing? The Cook Political Report still counts way more Republican-held House seats than Democratic ones as being in the toss-up category, and ratings keep moving seats in Democrats’ direction.

A new analysis from CNN’s Harry Enten ran with the encouraging headline, “Why some polls may be underestimating Democrats.” Enten uses results of recent Monmouth University polls that went from polling registered voters to polling likely voters. In its “likely voter” definition, Monmouth switched from using only past voting history, which would have a definite Republican lean, to voters with a high level of interest, even if they haven’t historically voted in past midterms. The polling showed a small but still significant Democratic tilt.

In five of the seven races polled, the Democratic candidate either did better or no worse when Monmouth switched from registered voters to likely voters. And in the two races where the Republican candidate does better with the switch to likely voters, the change was 2 points or less.

The average shift has been 2 points in favor of the Democratic candidate.

A 2-point shift may not seem like a lot but it could be huge if it holds across the board. Democrats right now hold roughly a 7-percentage point edge on the generic congressional ballot. That’s right in the area where they need it to be to have a net gain of 23 seats to take control. …

There’s also some heartening news when it comes to talking to actual voters (beyond the omnipresent interviews with loyal Trumpsters). Consider what Jonathan Rauch and Benjamin Wittes, normally nonpartisan senior fellows of the Brookings Institution, wrote in The Atlantic. In a piece headlined “Boycott the Republican Party,” they recounted what a Virginia voter told The Washington Post after the 2017 Democratic sweep:

“It could have been Dr. Seuss or the Berenstain Bears on the ballot and I would have voted for them if they were a Democrat,” he said. “I might do more analyses in other years. But in this case, no. No one else gets any consideration because what’s going on with the Republicans—I’m talking about Trump and his cast of characters — is stupid, stupid, stupid. I can’t say stupid enough times.”

As of April 2018 (the most recent data available), 59% of adults who are eligible to vote are Gen Xers, Millennials or “post-Millennials.” … Meanwhile, the electoral potential of Baby Boomers and older generations has declined since the last midterm. Driven mainly by deaths, there are now 10 million fewer eligible voters among the Boomer and older generations than there were in 2014.

That’s the good news. But historical models show low turnout by younger voters in midterm elections. Pew noted that only 36 percent of millennials and gen Xers voted in 2014, compared with 57 percent of their elders.

Yet the laser-like focus of the students in the March for Our Lives movement in registering young voters could change that. The Road to Change bus tour, led by survivors of the Valentine’s Day mass shooting in Parkland, Florida, is hitting the road in cities across the country to spread the word about voter registration, emphasizing the campaign issue of gun safety. Multiple polls show that stricter gun laws are a leading issue for young voters, and that 37 percent of voters under 30 say they “definitely” will vote in November, compared with 23 percent in past midterms.

As David Hogg, now a graduate of Marjory Stoneman Douglas High School who is taking a gap year before college to focus on the midterm elections and educate new voters, always tweets, “The young people will win.”

3 Comments on “More signs point to #BlueWave in midterms”

1948: The Japanese general who led the Bataan Death March in World War II, during which at least 10,000 U.S. and Filipino prisoners died, was executed by a firing squad in the Philippines. Click Political murder of the day for details.