The Ronny Jackson saga: a tale of sucking up and flaming out (UPDATE) 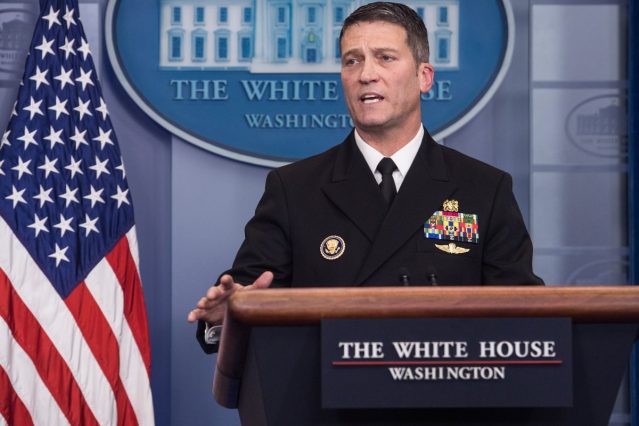 So Navy Admiral Ronny Jackson withdrew his name from consideration as the secretary of the Department of Veterans Affairs. You could say Dr. Jackson was the Harriet Miers of the Trump administration, except Harriet Miers never prescribed Percocet.

Harriet Miers, you may recall, is a Republican lawyer who was once counsel to President George W. Bush. In 2005, Bush nominated her to replace retiring Supreme Court Justice Sandra Day O’Connor, even though Miers had never been a judge. She finally withdrew from consideration, but it wasn’t because of her lack of experience. She was criticized by many conservatives because she wasn’t a staunch enough abortion opponent.

Like Jackson, Miers was unqualified for the job. Unlike Jackson, Miers didn’t expose raw ambition by sucking up to a president who was all too willing to succumb to flattery. She also didn’t do the kinds of things that Jackson allegedly committed:

The descriptions from Jackson’s colleagues (none attributed directly) in a report released by Senate Democrats are brutal.

Jackson was described as “the most unethical person I have ever worked with,” “flat-out unethical,” “explosive,” “100 percent bad temper,” “toxic,” “abusive,” “volatile,” “incapable of not losing his temper,” “the worst officer I have ever served with,” “despicable,” “dishonest,” as having “screaming tantrums” and “screaming fits,” as someone who would “lose his mind over small things,” “vindictive,” “belittling,” “the worst leader I’ve ever worked for.” Day-to-day environment was like “walking on eggshells.”

Jackson was viewed as someone who “would roll over anyone,” “worked his way up on the backs of others,” “was a suck-up to those above him and abusive to those below him,” a “kiss up, kick down boss,” “put his needs above everyone else’s.”

Most Americans probably had not heard of Ronny Jackson until he gave a now-infamous assessment of Donald Trump’s health. It was beyond laughable.

Jackson gushed about how healthy Trump was. He bragged about Trump’s “incredible genes” and his “excellent health.” Trump’s cardiac health also was described as “excellent,” despite the fact that Trump has no daily exercise beyond his frequent golf games (where he rides in a cart) and his well-known diet of Diet Cokes, cheeseburgers, Kentucky Fried Chicken, red meat, and double scoops of vanilla ice cream.

“I told the President that if he had a healthier diet over the last 20 years he might live to be 200 years old,” Jackson said to the laughter of reporters.

Nevertheless, with Trump, flattery will get you anywhere. So it wasn’t long before Trump fired VA Secretary David Shulkin (who had his own travel-related ethical challenges) by tweet and named Jackson as his successor.

Never mind the fact that Jackson has very little administrative experience. And he had nowhere near the experience to run an agency with an annual budget of $186 billion that serves over 9 million veterans and oversees 360,000 employees. The nation’s injured veterans deserve better than a flattering flunky to oversee their care.

You almost have to feel sorry for Ronny Jackson (note I said almost). Earlier, general reports never questioned his medical competency. But he sounds like an awful person to work for.

Jackson also is a rear admiral. The military doesn’t exactly make it easy to criticize a superior officer, so it’s understandable that these criticisms weren’t out in the open before. And while he will continue in his post in the White House Medical Unit, his reputation and his career are in ruins.

So ask yourself, Dr. Jackson: Was it really worth shaving all of those pounds off Donald Trump’s weight, just to make him feel less fat?

UPDATE: Now it seems that Jackson is out of a job as Trump’s physician as well as the VA. Two administration officials report that Jackson will not return as the president’s physician, although he will remain with the White House Medical Unit.