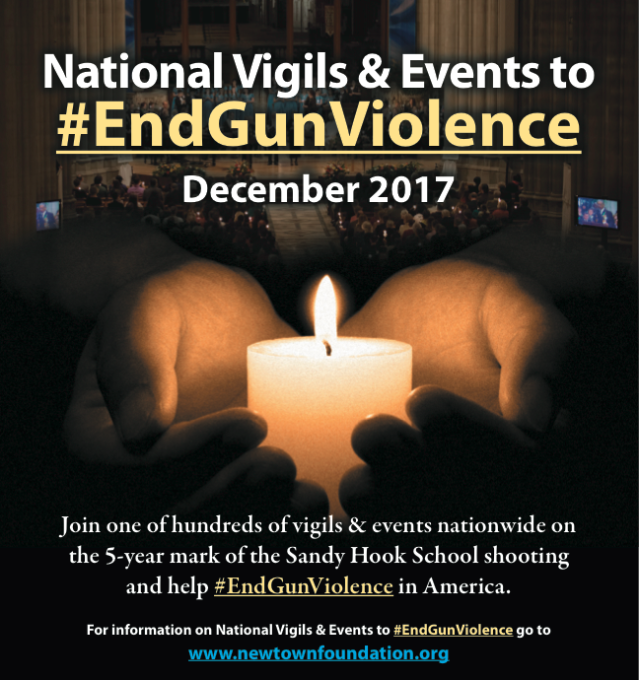 Hardly a week goes by without news of a mass shooting somewhere in the United States. But a mass shooting five years ago still leaves a hole in our hearts and anger in our souls.

It was Dec. 14, 2012, when Adam Lanza used an assault rifle and a semi-automatic handgun to kill 20 6- and 7-year-olds and six adult staff members at the Sandy Hook Elementary School in Newtown, Connecticut. He had shot his mother to death earlier, and he killed himself after the shooting.

We all remember the horror of that day. We wept along with President Obama, both immediately afterward and during his poignant and heartfelt remarks to the Newtown community. We waited for lawmakers to do the right thing and pass common-sense gun laws.

Even while the details of Sandy Hook fade as our attention turns to other acts of gun violence, it will forever remain fresh in the minds of those affected in Newtown, Connecticut. They started Newtown Action Alliance, a national grassroots organization formed after the Sandy Hook Elementary School shootings and based in Newtown itself. Newtown Foundation is the charitable arm of Newtown Action Alliance. The group’s mission, as described on its website, is “to achieve the steady and continuous reduction of gun violence through legislative and cultural changes.”

We haven’t seen that gun violence reduction or those legislative changes. So Newtown Action is joining with many of the nation’s gun safety groups by inviting people nationwide to participate in peace vigils and to keep demanding action.

Many had hopes that the death of 20 first- and second-graders would be enough to move lawmakers to pass common-sense gun laws that are favored by a large majority of Americans. Public support for gun safety always rises immediately after a mass shooting, then fades somewhat. Just as in this recent poll by Politico, taken after the Las Vegas shooting on Oct. 1 that killed 58 people, there always remains a big percentage in favor of:

The list goes on and on. Yet lawmakers still resist passing even a minimum piece of legislation, fearing retribution from the National Rifle Association. But in response to the shooting at a Baptist Church in Sutherland Springs, Texas, which killed 26 people, there are two new attempts.

Democratic Rep. Sheila Jackson of Texas introduced a bill called the “Gun Safety: Not Sorry Act.” It would require “a 7-day waiting period before a semiautomatic firearm, a silencer, armor piercing ammunition, or a large capacity ammunition magazine may be purchased or transferred ownership.” As Jackson said in describing her bill:

The “Gun Safety: Not Sorry Act” will not abridge the Second Amendment, take away gun rights, nor impose greater restrictions on gun ownership, BUT it would significantly reduce gun homicides. According to an October 2017 Harvard University study, the adoption of a national waiting period, from 1994 to 1998 under the Brady Handgun Violence Prevention Act, led to a 17 percent drop in gun homicides.

Handgun purchase waiting periods in 17 states, Texas not being one of them, prevent about 750 gun deaths each year in the United States. An estimated 910 gun deaths could also be avoided if those policies were adopted nationwide.

On the Senate side, a bipartisan group of four senators—Democrats Chris Murphy and Richard Blumenthal of Connecticut and Republicans John Cornyn of Texas and Tim Scott of South Carolina—introduced their own bill to strengthen reporting to the national background check system. The bill, which has four co-sponsors, two Democrats and two Republicans, “would require states and agencies to produce plans for sending records to the National Instant Background Check System (NICS) that would show if an individual is prohibited from buying a gun and verifying that the information is accurate,” according to a story in The Hill.

As Cornyn said in introducing the bill:

For years agencies and states haven’t complied with the law, failing to upload these critical records without consequence. … This bill aims to help fix what’s become a nationwide, systemic problem so we can better prevent criminals and domestic abusers from obtaining firearms.

It’s clear that this bill to strengthen background checks is needed. The NICS lacks information on more than 25 percent of all felony convictions, according to a 2013 report by the nonprofit National Consortium for Justice Information and Statistics, because too many states don’t turn in reports. Even the NRA admits that about 7 million records aren’t in the system.

There’s always a call for action after every mass shooting. After Columbine. After Virginia Tech. After the movie theater in Aurora, Colorado. After Sandy Hook. After Orlando. After Las Vegas. After Sutherland Springs. There is a never-ending litany of names of towns and people affected by gun violence. Yet it never stops.

There will be a national vigil in Washington, D.C., at St. Marks Episcopal Church near Capitol Hill on Dec. 6 to mark the fifth anniversary of Sandy Hook. Among the organizations joining the Newtown Foundation and taking part in the Dec. 6 event in Washington:

The organizers of the Washington event originally invited family members who have lost loved ones to gun violence and survivors to attend. They even offered travel assistance and hotel rooms. But 500,000 people have been killed or injured by gun violence since December 2012. Each year, more than 30,000 people die through gun violence.

Last year, on the fourth anniversary of Sandy Hook, there were 330 such events in 43 states. Newtown Action is hoping for more than 500 vigils this year in all 50 states.

To host a vigil or event, Newtown Action offers a tool kit to facilitate planning and to coordinate a collective gun violence prevention message. You can find more information on the Newtown website.

To find an event near you, visit Newtown Action’s Facebook page describing the events or the still-growing list of the many vigils planned. They are spread throughout the dates of Dec. 6-17 and in all areas of the country, although many are planned for the anniversary date of Dec. 14. Besides the candlelight vigils, at many of these events, participants will receive educational materials on gun violence prevention. Some will collect materials for care packages for the families of gun violence victims. Others will invite attendees to participate in social media campaigns and sign pledge cards.

On Dec. 14, churches nationwide are invited to ring church bells in remembrance of the 26 Sandy Hook victims at 9:35 a.m., the time the deadly attack in Newtown started. Maybe the sound of church bells ringing will remind lawmakers that we haven’t moved on from the issue of gun violence, even if some of them have.

Let’s not let legislators off the hook. Do it for these children and the brave adults who died trying to save them. 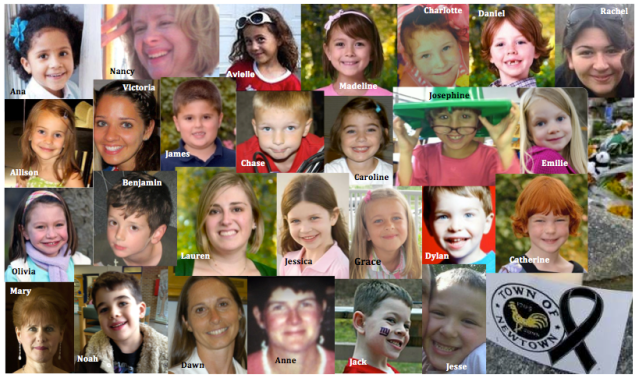 And for the 150,000 people who have died from gun violence ever since.

← I’m ready for a world with women in charge
We need more women in power. In media, government, entertainment… →

2018: Remembering the 11 worshipers shot and killed by a white anti-Semitic domestic terrorist at a Pittsburgh synagogue. Click Political murder of the day for details.