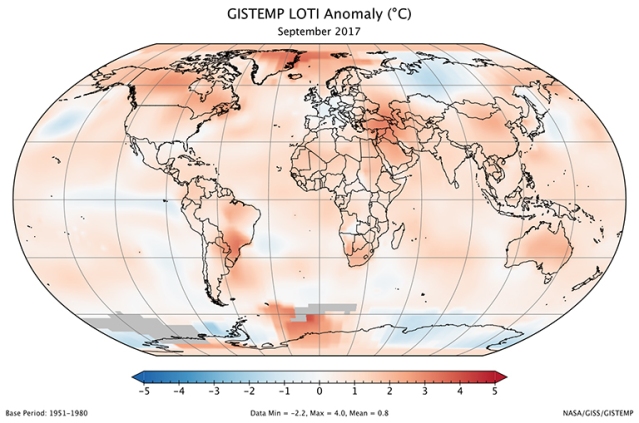 A global map of the September 2017 LOTI (land-ocean temperature index) anomaly, relative to the 1951-80 September average. As temperatures rise, health problems in the Earth’s warmest areas will, too.

Despite what climate deniers say, we know the damage that is happening to our planet. But a new, comprehensive ongoing study looks at the devastating health effects of climate change and how global warming will harm people’s livelihoods in the years to come.

Of course, the conclusions about health aren’t really new; they are just restating what other health experts, scientists, and climatologists have been telling us all along. For instance, this recent study from Nature Climate Change detailed the deadly effects of the increased number of extreme heat waves, which expose 30 percent of the world’s population to temperatures above a lethal threshold for at least 20 days a year.

What makes this report from The Lancet Countdown scarier is the conclusion that “The human symptoms of climate change are unequivocal and potentially irreversible—affecting the health of populations around the world today.”

Here are some of the health disasters that already are happening and that we can look forward to as they worsen:

And that’s not all. As the report points out:

The health effects from non-communicable diseases are just as important. Mediated through a variety of pathways, they take the form of cardiovascular disease, acute and chronic respiratory disease from worsening air pollution and aero-allergens, or the often-unseen mental health effects of extreme weather events or of population displacement. Indeed, emerging evidence is suggesting links between a rising incidence of chronic kidney disease, dehydration, and climate change. …

The public and the health systems they depend on are clearly unprepared to manage the health impacts of climate change.

The depressing addition in this study is that, besides the increased health risks, people working in rural areas are experiencing reduced productivity because of higher temperatures. The “global labour capacity of rural labourers, such as farmers, has fallen by 5.3 percent from 2000 to 2016 due to rising temperatures and the inability to work when it’s too hot.” In other words, heat’s impact on humans doing manual labor outdoors lessens their capacity to work, and hence their productivity. Lancet notes a two percent decrease in such productivity between 2015 and 2016 alone, as each year sets new records for being hotter.

The Lancet Countdown is a joint project of 24 universities and intergovernmental organizations, from every continent in the world. It follows the 2015 Lancet Commission on Health and Climate Change. Its members consist of “climate scientists, ecologists, mathematicians, geographers, engineers, energy, food, and transport experts, economists, social and political scientists, public health professionals, and doctors.”

A story from Think Progress on the Lancet study outlined the detrimental effects of climate change on productivity in many areas, but especially in the U.S. South.

A 2013 NOAA study concluded that “heat-stress related labor capacity losses will double globally by 2050 with a warming climate.”

In fact, by the 2080s, much of the Southern U.S. will see temperatures above 90°F for five months of the year or more, according to the congressionally mandated 2014 U.S. National Climate Assessment. And that’s a startling change from just the recent past.

NOAA’s 2013 study warned that in the case of 7°F or higher warming, we face as much as a 50 percent drop in labor capacity in peak months by century’s end — versus a more manageable 20 percent drop if we sharply reverse emissions trends immediately.

The productivity loss from warming could exceed the “combined cost of all other projected economic losses” from climate change, explained one expert — and yet it has “never been included in economic models of future warming.”

Really, what can we do with an administration in which Energy Secretary Rick Perry thinks that expanding fossil fuels will somehow prevent sexual assault? Perhaps linking climate change to a drop in productivity will cause business leaders to take note, even if Donald Trump and his climate-denying Cabinet never will.

Anthropogenic climate change threatens to undermine the past 50 years of gains in public health, and conversely, a comprehensive response to climate change could be “the greatest global health opportunity of the 21st century.” …

More recent trends in the past five years reveal a rapid increase in action, which was solidified in the Paris Agreement. These glimmers of progress are encouraging and reflect a growing political consensus and ambition, which was seen in full force in response to the USA’s departure from the 2015 climate change treaty. Although action needs to increase rapidly, taken together, these signs of progress provide the clearest signal to date that the world is transitioning to a low-carbon world, that no single country or head of state can halt this progress, and that until 2030, the direction of travel is set.

This project will continue until 2030. For the future, the Lancet Countdown will report annually on progress in implementing the Paris Agreement, future promises that build on the original commitments, and the health benefits that result.

1969: Fred Hampton and Mark Clark, two leaders of the Black Panther Party, were killed in a Chicago two-flat during a raid by a police and FBI 14-man tactical unit, even though no one in the apartment fired a shot. Click Political murder of the day for details.