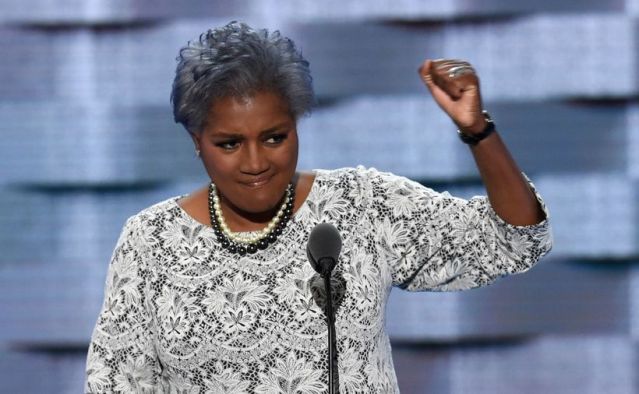 Donna Brazile’s explosive accusations about the 2016 election aren’t holding up well, but the media are eating them up nonetheless.

Donna Brazile, the head of the Democratic National Committee in the final days of the 2016 presidential campaign, is making blockbuster charges in her new book that are causing the political media world to gasp.

Brazile’s book, Hacks: The Inside Story of the Break-ins and Breakdowns That Put Donald Trump in the White House, is about to be released, but both Politico and The Washington Post ran excerpts from the explosive memoir. Never mind that the original claims of “Hillary Clinton’s Secret Takeover of the DNC” (Politico) and the claims that Brazile was going to replace Clinton and vice presidential nominee Tim Kaine with Vice President Joe Biden and Sen. Cory Booker (Washington Post) turn out to be not quite as accurate as first reported.

In the case of Politico, further digging showed that the Joint Fundraising Agreement between the Clinton campaign and the DNC also had been offered to Clinton’s primary rival, Sen. Bernie Sanders. Basically, Clinton and her fundraising team lifted the DNC out of a red-ink hole. So no, the election wasn’t “rigged.”

In the case of the Post, the newspaper had to keep publishing “clarifications” about Brazile’s claim that she wanted to replace the Clinton-Kaine ticket with Biden-Booker. It turns out that Brazile thought about starting the process to replace the ticket after Clinton’s pneumonia diagnosis was made public in September 2016 (Clinton obviously recovered). Never mind that this would have thrown out the wishes of those who voted in Democratic primaries and caucuses, for either Clinton or Sanders (Clinton beat Sanders by some 4 million votes).

Brazile’s claims, which no doubt will go a long way toward selling her book, made for explosive headlines for a few days. Most voters, however, have been ready to move on from 2016 for a long time. True, the claims in the book reopened old wounds between die-hard activists who were feeling the Bern and those who always said, “I’m with her,” but most of America feels like it wants — and needs — to relegate the 2016 election to history.

There’s another factor at work, though. Most of the nation’s media are doing a thorough job of covering Special Prosecutor Robert Mueller’s investigation in connections between the Trump campaign and Russia. All media gave oversize coverage to statements by rogue Republicans who are publicly breaking with Trump and leaving the Senate (Bob Corker of Tennessee and Jeff Flake of Arizona). Even if Flake was facing a likely loss in the primary, his Senate speech excoriating Trump and Corker’s continued criticisms offer the kind of quotes the Beltway media crowd love. In other words, Trump has been taking it on the chin, even as he tweets that “everyone” wants Hillary Clinton investigated.

So why shouldn’t it be the Democrats’ turn (an equal-time charge known as “whataboutism”)? Why shouldn’t the media spend a week or so dishing dirt on Democrats? Any story that throws mud at Hillary Clinton always chalks up big numbers anyway.

Democratic activists are furious that raising the old “rigged” charge will cement party divisions, especially as they work toward coming state elections and look to make gains in the 2018 midterms. In what he called “Donna Brazile’s Growing Pile of Nonsense,” Josh Marshall lamented the fact that Brazile’s charges, however false, mask the problems that do exist in the Democratic world.

Rethinking the way the DNC works would be a good thing. The DNC is the one committee whose stakeholders should be all Democrats – not the DCCC, which works for House incumbents or the DSCC, which works for Senate incumbents. It should never be about one candidate or one election cycle. It is a genuine shame that someone like Donna Brazile, who has worked so hard and so consistently in Democratic politics for decades, has now chosen to make it all about herself.

About 100 Clinton aides published a letter disputing Brazile’s claims and urging all Democrats to move on. So what did we learn from this election rehash?

In other words, nothing new. So c’mon, media. Let’s stick to the present day. There are enough political scandals to keep you occupied for a long time.

1976: The body of a Chicago mobster, “Handsome Johnny” Roselli, recruited by the CIA to assassinate Cuban leader Fidel Castro, was found in a steel drum floating near Miami. Click Political murder of the day for details.