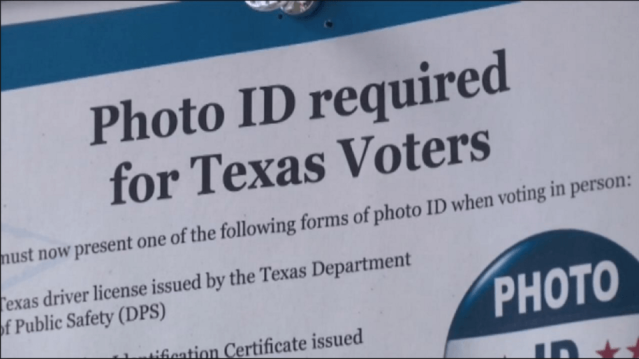 Voter suppression tactics such as state voter ID laws are among the obstacles to voting that the ACLU will be fighting against.

Between the fraudulent national voter suppression commission run by Kansas Secretary of State Kris Kobach and a plethora of state-level voter suppression laws, many U.S. citizens are encountering roadblocks on their way to the voting booth.

The American Civil Liberties Union aims to change all that.

Coming less than a week after #NationalVoterRegistrationDay (not that we should limit that to a day, a week, a month, or a year), the ACLU is launching its own nationwide events to promote and expand voting rights and increase voting participation. The events are being started in all 50 states and the District of Columbia, since voting rules are established at the state level.

Oct. 1 marked the start of the ACLU “Let People Vote” campaign. Ground Zero is in Lawrence, Kansas, right in Kobach’s backyard, since he’s been one of the driving forces of voter suppression.

It’s no surprise that Donald Trump picked Kobach to rev up the conservative base against the nonexistent problem of voter fraud. Trump and Kobach are trying to cast doubt on the fact that Trump received nearly 3 million fewer votes than Democratic nominee Hillary Clinton in the 2016 election, claiming that those votes must have been illegal.

According to the ACLU’s description of its new launch and the reason the group is targeting Kansas specifically:

In Kansas, tens of thousands of citizens were prevented from registering to vote after Kobach pushed through new and onerous registration barriers.  The ACLU took Kobach to court over his disenfranchisement scheme and won.  Judge Jerome Holmes of the Court of Appeals for the 10th Circuit, a George W. Bush appointee, warned that Kobach’s policies amounted to “the mass denial of a fundamental constitutional right.”

Kobach also tried to create a two-tiered election system to prevent thousands of voters from casting ballots in state and local elections, but that was also stopped by the courts.

When he went on a quest to find non-citizens who had voted, he was only able to convict one person for voting without citizenship:  a foreign national who at the time was in the process of naturalization and is now a citizen.

Here are some of the aims of the ACLU campaign, all of them state-specific:

As Shakir told Reid during the interview, “We have too little civic participation in America. It’s too hard to vote. The lines are too long. We need to encourage more participation.”

There’s no way to measure whether voter suppression cost Clinton the election, but a new study backs up the theory with numbers. In Wisconsin, Trump won by some 22,000 votes. Yet the state’s voter ID law stopped up to 23,000 people from voting in the reliably Democratic Dane and Milwaukee counties. When those numbers are extrapolated statewide, the study suggests that up to 45,000 people in Wisconsin were stopped from voting. And yes, those who couldn’t vote were disproportionately low-income and African-American.

Of course, to change those state voter suppression laws, we need Democratic state legislators who are ready, willing, and able to make those changes. Since the 2016 election, Democrats are rolling up victories, turning former Republican seats over to the Blue team. Eight former GOP seats are now in the Democratic column. Virginia and New Jersey are holding elections in November, and Virginia Democrats are hoping for more seats to turn away from the dark side.

This ACLU video explaining more about voter suppression is from 2012, but it’s just as true today as it was then:

Even in states where voter suppression laws are still in effect, it’s important to register and vote to elect state legislatures that can make needed changes. If you, your family, your friends, your neighbors, and your co-workers are not registered to vote and missed National Voter Registration Day, don’t worry: You can register online, find a voter registration event near you, and learn more about the voting laws, including requirements and restrictions, in your own state.

The new ACLU campaign to fight back against voter suppression is just getting started. To search for a “Let People Vote” event launch near you, check this link.

← The right to #TakeAKnee is what makes America great
It’s guns, people. That’s it. #GunControlNow →

1810: Swedish Count Hans Axel von Fersen, a soldier and diplomat who was the alleged lover of French Queen Marie Antoinette, was killed by a lynch mob in Stockholm. Click Political murder of the day for details.