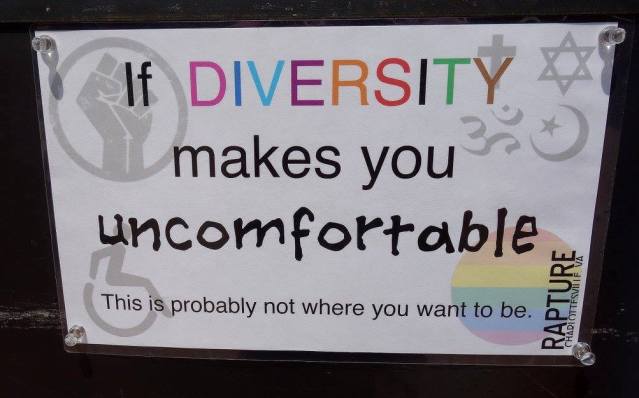 The Rapture Restaurant in Charlottesville, Virginia, was clear about the openness of its customer base. (Photos by Sandy Anderson)

The rise of white supremacy in the United States, with Donald Trump as its head cheerleader, has heightened tensions across the country. The “Unite the Right” march in Charlottesville, Virginia, and the killing of Heather Heyer when a neo-Nazi rammed his car into a crowd of counter-protesters, has spurred marches, vigils, and actions nationwide to counter the hate speech of the white supremacist crowd. The crowds in Boston showed the power of numbers when demonstrating peacefully. But many still feel lost, wondering about the most effective methods of fighting racial hatred.

Racial bias and hatred are nothing new in this country, but since the rise and election of Donald Trump, white supremacist groups have become emboldened to spew their specific brands of hate both online and in person. They are using any excuse to target minorities of any kind. The removal of statues honoring Confederate Civil War leaders is just the latest spark igniting publicity-seeking actions, often by heavily armed participants. What has been labeled the “Trump effect” has given rise to a sharp increase in bullying against minorities in the nation’s schools.

The Southern Poverty Law Center is offering some new and updated tools on how to respond. The SPLC has updated its publication, “Ten Ways to Fight Hate: A Community Response Guide.” Because much of the white supremacist action is aimed at the nation’s college campuses, it also has a new guide specifically aimed at colleges: “The Alt-Right On Campus: What Students Need To Know.”

Both online publications offer specific suggestions and actions on how to counter such groups both on a college campus and in everyday life.

And in Charlottesville itself, the community is showing the world how to fight back.

From “Ten Ways,” the SPLC offers what it calls “10 principles for fighting hate in your community.”

There are lots of suggestions for action, like join forces in the community with diverse coalitions. Faith leaders, the business community, schools, local media, elected officials, and local law enforcement are all described as potential allies. Education of the entire community — including the media — is described as key.

There also are suggestions on what not to do.

Do not debate hate group members on conflict-driven talk shows or public forums. Your presence lends them legitimacy and publicity. They use code words to cover their beliefs. And they misinterpret history and Bible verses in a manner that may be difficult to counter during a live forum. …

Do not attend a hate rally. Find another outlet for anger and frustration and for people’s desire to do something. Hold a unity rally or parade to draw media attention away from hate.

Hate has a First Amendment right. Courts have routinely upheld the constitutional right of the Ku Klux Klan and other hate groups to hold rallies and say whatever they want. Communities can restrict group movements to avoid conflicts with other citizens, but hate rallies will continue. Your efforts should focus on channeling people away from hate rallies.

“Every act of hatred should be met with an act of love and unity,” the SPLC writes. The seemingly spontaneous “Taking Back the Lawn” candlelight vigil on the University of Virginia campus, four days after the alt-right march, outdrew the neo-Nazis. Organizers were careful not to share the event on social media to tip off white supremacists; instead, the word about the event spread by word of mouth and text messaging.

In “The Alt-Right On Campus” are tips on how to counter white nationalist campus speakers without resorting to violence. “Take action to inoculate the campus against such extremism before these speakers appear on campus,” the SPLC writes.

The thrust of the advice seems to be, “Don’t give them what they want.”

When an alt-right personality is scheduled to speak on campus, the most effective course of action is to de­prive the speaker of the thing he or she wants most — a spectacle. Alt-right personalities know their cause is helped by news footage of large jeering crowds, heated confrontations, and outright violence at their events. It allows them to play the victim and gives them a larger platform for their racist message.

Denying an alt-right speaker such a spectacle is the worst insult they can endure.

While there’s nothing wrong with peaceful student protests against a hateful ideology, it’s best to draw attention to hope instead. Hold an alternative event — away from the alt-right event — to highlight your cam­pus’ commitment to inclusion and our nation’s democratic values.

When the town was invaded by the forces of hate, groups in Charlottesville took action. They banded together to fight back. Partly in protest and partly as a safety measure, some businesses shut down for at least part of the day on Aug. 12, the day of the “Unite the Right” march. The coffee house Atlas Coffee sent part of that day’s proceeds to the SPLC. A stationery store called Rock Paper Scissors printed posters — a simple heart with only the word “C’ville” and a purple poster with the name “Heather” — and offered them for free distribution. 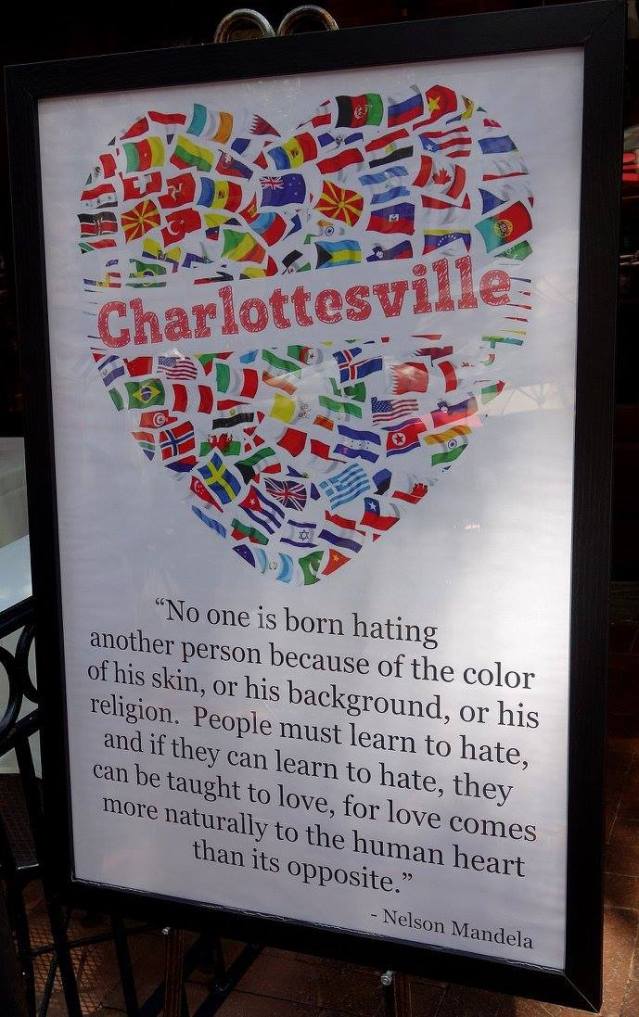 Other posters with a clear message are on display throughout Charlottesville.

Businesses weren’t the only ones.

The group UnityC’ville, made up of civic and human rights organizations as well as local businesses, put together a counter program during the day of the march and is raising money for injured victims, including those injured by the rammed car. A GoFundMe page already has raised nearly triple the original goal of $50,000.

The Charlottesville Clergy Collective, a group of local churches and faith leaders of different races, formed after the 2015 shooting at Emanuel AME Church in Charleston, South Carolina, to discuss and address race relations in the Charlottesville area, which has a history of racial segregation. Their response to the alt-right march events has been inspiring, even as there was initial disagreement within the group on exactly how to respond.

The night before the march, while the tiki torch brigade was shouting and chanting Nazi slogans, clergy and worshipers were inside a local Episcopal church for a prayer service, planning their own peaceful march. There was also a prayer service at a local synagogue. They were all trapped inside their houses of worship as the armed white supremacist thugs massed across the street; at both venues, participants had to sneak out back and side doors. Inside the synagogue, participants had removed the Torah, including a scroll that had survived the Holocaust, for safety, amid threats that the building would be burned.

The next day, we all saw numerous photos of clergy from a variety of faiths walking with elbows linked in a show of solidarity, holding the line. Before and after the alt-right march, the Clergy Collective offered counseling and opened area churches for drop-in support and community care gatherings.

The memorial service for Heather Heyer drew an overflow crowd. Many wore purple, Heather’s favorite color. Makeshift memorials, flowers, and messages still lined the street where the 32-year-old was fatally injured when the driver plowed into the crowd of counter-protesters.

“They tried to kill my child to shut her up, but guess what, you just magnified her,” Bro told the attendees. “I’d rather have my child, but by golly if I got to give her up, we’re going to make it count.”

One of Heather’s co-workers also shared memories of her friend.

1793: Louis XVI, the last king of France before the French Revolution, became separated from his head in a Paris guillotine. Click Political murder of the day for details.