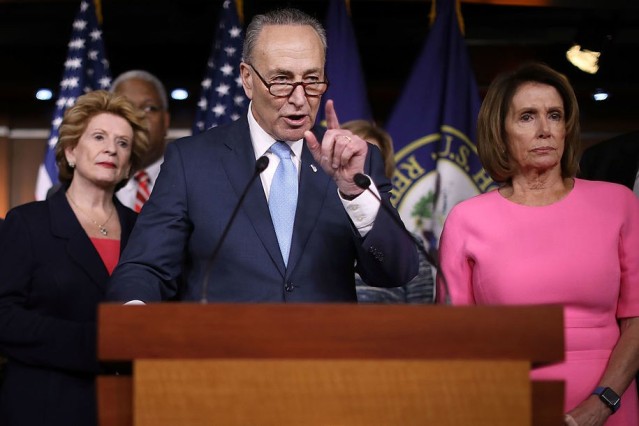 Democrats in Congress are rolling out a rallying call for the midterm elections that focuses on the middle class.

As Democrats gear up for the midterm elections in 16 months, the party has been working on a new “core message” that they hope will align them with ordinary Americans. Democrats in both the House and Senate will deliver a unified message of populism that they hope will carry them to electoral victory in 2018.

Before the official rollout of the new strategy on July 24, House Democratic Leader Nancy Pelosi offered some details of the three-pronged attack in The Washington Post: “A Better Deal: Better Jobs, Better Wages, Better Future.”

First, Democrats are pledging ourselves to the goal of creating good-paying, full-time jobs for 10 million more Americans in the next five years.

It is time to ignite a new era of investment in America’s workers, empowering all Americans with the skills they need to compete in the modern economy. We are calling for a new tax credit for employers to train and hire workers at a good wage, and a massive new national commitment to expanding apprenticeships and paid on-the-job training that advances their skills and careers. …

Democrats’ pledge ourselves to breaking the grip of the special interests and confronting the rising everyday costs that families have endured for too long.

That is the impetus behind our second proposal, to put economic power back into the hands of the American people, cracking down on the monopolies and big corporate mergers that harm consumers, workers and competition. We will demand that proposed mergers meet tough new standards to protect competition before approval, and will institute post-merger reviews to ensure that consolidated companies keep their promises to American consumers.

In crafting a new message, several Democrats have said publicly that they’ve got to be more than the anti-Trump party. According to a story on Yahoo News quoting New York Rep. Joe Crowley, the No. 4 House Democrat:

“I recognize that waiting for Trump to implode … will not work,” Crowley said. “What will work is Democrats having a message that appeals to the average American.”

The complete rundown of the new legislative agenda has yet to be released, but it reportedly will be kept simple: No identity politics. No foreign policy. No social issues.

Um … haven’t Democrats had a lot of success fighting for health care lately?

Part of the reason for the impetus — besides the need to win elections — may be seen in the results of a recent Washington Post-ABC News Poll. While Donald Trump’s numbers are historically bad, with an approval rating of 36 percent and a disapproval rating of 58 percent, including 48 percent who “disapproved strongly” of Trump’s performance as president, poll respondents said they saw the Democratic Party as more anti-Trump than anything else.

Democrats have been getting lots of advice — some of it useful, some of it bad — about which direction the party needs to be headed. Pollster Mark Penn, long tied to Bill and Hillary Clinton, was heavily derided for his New York Times op-ed telling Democrats that they should head “back to the center.” Bernie Sanders favors pushing Democrats to the left and concentrating on winning independents. Comedian Seth Meyers contends that Democrats need to be more “authentic,” saying that, although Trump may be dishonest, at least he is perceived as authentic — by his supporters, anyway.

In a recent speech, Joe Biden’s advice was that Democrats can “promote progressive values and reach out to economically embattled voters, including Trump voters, at the same time.” The New Republic suggested that Democrats offer a federal jobs guarantee: the promise of “a good job for every American who wants one.” Politicians and pundits alike aren’t shy about delivering pronouncements on what Democrats need to do in the next electoral cycle.

But apparently Democrats have been working for months on their midterm strategy. Here’s how Dana Milbank of The Washington Post described the new Democratic message:

Titled “A Better Deal,” it is expected to have many Democratic staples — tax increases on the rich, affordable college, infrastructure spending, higher wages, job training, paid family leave and the like — and a few new ones.

Hashed out over several months by Senate Minority Leader Chuck Schumer (N.Y.) and Sen. Chris Van Hollen (Md.) and House Minority Leader Nancy Pelosi (Calif.) and DCCC Chairman Ben Ray Luján (N.M.), it will be outlined Monday with a few sample proposals, to be followed in the coming weeks by more proposals, some to be introduced as legislation and some to be offered as Contract With America-style promises that a Democratic Congress would implement. Schumer told me in December that Democrats would have “five, six sharp-edged [policies] that can be described in five words,” although it sounds as if the plan hasn’t come out quite so lean.

In other words, even before the new strategy is rolled out, it already sounds complicated. I don’t know that I’ve ever heard Chuck Schumer limit himself to five words about anything. Even the slogan of “A Better Deal” already is being mocked as being reminiscent of a Papa John’s Pizza ad campaign.

And you can’t dismiss anger against Trump as a motivating factor in driving Democrats to the polls. Democrats narrowed gaps in several special elections even if they didn’t win the ultimate prize. There have been Democratic pickups at state levels. Resistance movements are active throughout the country. The sleeping giant on the left has been startled awake, and it’s not going to take a nap anytime soon.

Don’t buy the argument that Hillary Clinton lost because she didn’t have an economic message, or that she had so many messages that they all got muddled. We don’t need to rehash the media’s email obsession, the James Comey effect 11 days before the election, Trump’s blatant lying, Russian meddling, and sexism, just to name a few factors.

But simplifying an electoral message is always a winning strategy, especially when it’s about pocketbook issues. Here’s how a few lawmakers described the Democratic dilemma in the Yahoo News story:

Rep. Linda Sanchez, D-Calif., the vice chair of the House Democratic Caucus, said Democrats have plenty of policies they stand for, but communicating them effectively is a challenge. She told reporters that Democrats have a tendency to get lost in the nuances.

“We’re not good at giving the headlines. We want to get into the weeds,” she said. “On these issues, we know that we’re fighting for what the majority of Americans want, we just haven’t convinced them of that because we’re too detail-oriented.” …

Part of that is the Democrats’ resistance to simple slogans. Democratic National Committee Chairman Tom Perez told Yahoo News in February that the party’s message can’t fit on a bumper sticker as easily as the Republicans’ can.

Actually, President Harry Truman, in his plainspoken way, once gave a pretty good description of what Democrats stand for:

You can’t get more basic than that.

← Donald Trump Jr. ‘can’t wait for 4 years to be over.’ How do you think the rest of us feel?
A Boy Scout Jamboree or a Hitler Youth rally? (UPDATE) →

1 Comments on “Democrats honing an economic battle cry for 2018”