What will be the Trump-Russia equivalent of Watergate’s smoking gun? 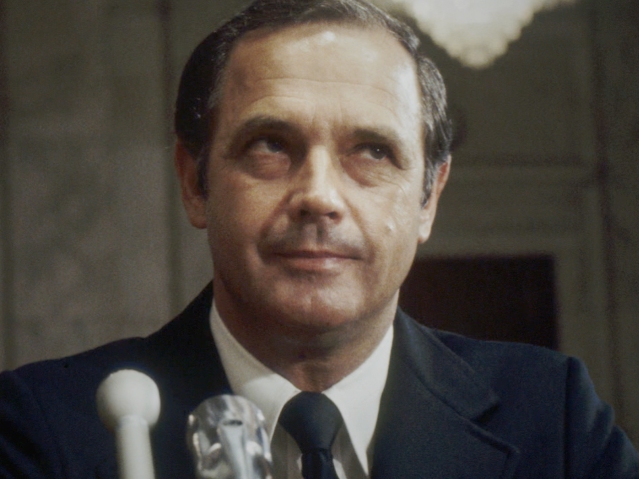 With TV cameras broadcasting the images live across the nation, Butterfield told the Senate Select Committee on Presidential Campaign Activities, better known as the Senate Watergate Committee, that Nixon had a hidden tape recording system in the Oval Office that he used to record conversations. The immediate realization was that the tapes of those conversations likely would have definitive proof, in Nixon’s own voice, that he knew about the cover-up of the 1972 burglary of the headquarters of the Democratic National Committee at the Watergate complex.

Rather than connecting a dotted line, the committee now was barreling down a six-lane highway.

Butterfield didn’t want to reveal the taping system, which he actually had been directed to install as a means of making recordings for a future Nixon Presidential Library. But he got called before the committee, and years later, he told The Washington Post that “when Don Sanders, the deputy minority counsel … asked the $64,000 question, clearly and directly, I felt I had no choice but to respond in a like manner.”

Do the revelations in Donald Trump Jr.’s emails about the June 2016 meeting between Natalia Veselnitskaya, the Russian lawyer with Kremlin ties, and Trump Jr., Jared Kushner, and Paul Manafort to hear “dirt” on Hillary Clinton meet the same standard of culpability as the Nixon “smoking-gun” tape recordings?

Butterfield had left the Nixon White House by the time the Senate Watergate investigation started. In 1972, he had become the head of the Federal Aviation Administration and thought he had dodged a bullet in not being called before the committee. According to the Post account by Alicia Shepard, author of Woodward and Bernstein: Life in the Shadow of Watergate:

When the committee list was published, he thought he was safe. He knew he possessed a valuable secret, but he was also a loyal Republican with no intention of squealing.

Then came a phone call. Senate investigators wanted to know what, if anything, he knew. He was invited to a standard pre-interview on Friday, July 13. …

“Were there ever any recording devices other than the Dictaphone system you mentioned,” he recalled being asked.

Butterfield froze. This was a direct question. He hesitated, took a deep breath and answered, “Yes.” …

The room fell silent. The tension was palpable. “They were young,” Butterfield told me. “They were ecstatic. I said, ‘Wait a minute. Let’s be serious. I know this information I gave you is monumental. Let’s think this through.’ ”

But it was too late. The investigators instantly understood the significance of Butterfield’s answer.

He would tell the world the same information a few days later.

After the Butterfield bombshell went public, Nixon basically became dead meat, although he fought every step of the way and it took a year for him to leave office. Watergate special prosecutor Archibald Cox subpoenaed the secret recordings and Nixon refused to turn them over, claiming executive privilege. A federal court ordered him to comply, and Nixon tried to get around that order by working out a deal to deliver only partial details in transcripts. Cox said no dice. Nixon did all he could to stop the tapes from being released, even ordering Cox’s firing in October 1973 — the infamous Saturday Night Massacre, which led to the resignations of Attorney General Elliot Richardson and Deputy Attorney General William Ruckelshaus, who refused to follow Nixon’s orders.

Partial transcripts of the tapes were released. There was an 18½-minute gap in one tape that was recorded at a time when Nixon and his aides would have been discussing the Watergate break-in. Chief of staff Alexander Haig chalked up the erasure to “some sinister force.”

Ultimately, Nixon lost. A year after Butterfield’s testimony, the U.S. Supreme Court ruled unanimously that Nixon must turn over all of the tapes. The president, facing the growing likelihood of impeachment and conviction, resigned 15 days later.

If you were around during Watergate, you might remember that as detail after detail about the scandal emerged, it was hard to keep track of all the revelations. That same head-spinning sensation is occurring today, as more and more of the extent of the Russian involvement in the 2016 election is revealed, along with the extent of the Trump campaign’s collusion, and who exactly is involved. This time, it’s just being revealed more quickly. A lot more quickly. Because Don Jr. doesn’t know enough to keep his mouth — or his emails — shut.

When The New York Times broke the story of the June 2016 meeting between Team Trump and the Russian lawyer, Don Jr. changed his story about the meeting more often than Donald Trump Sr. changed stories about why he fired FBI Director James Comey. As a subhead in a Politico story put it, Trump’s lawyers “are trying to remind the president and his aides that small indiscretions can spell big trouble.”

Trump’s legal team is attempting to separate the president from Donald Trump Jr. and the son’s legal team on Russia matters, as well from Jared Kushner and his legal team, over concerns that the blurred lines could create unnecessary problems, according to these sources. They have tried to block Trump’s warring band of aides from joining meetings with his lawyers, warning that they could become witnesses or be forced to hire lawyers if they attend. …

“I’m not sure what the issues would be from a legal sense, but their conduct is definitely problematic and raises many issues,” said Matthew Miller, a former Department of Justice spokesman under the Obama administration. “If they’re all talking together and trying to get their stories straight, that’s a problem.” …

Many of the problems come from Trump, who assures his legal team that he understands their advice but then disregards it, several White House officials and advisers said. “They say, don’t do this, don’t do that, and he then he tweets,” one White House adviser said. “And then the conversation happens again.”

There’s no doubt that the now-infamous meeting in Trump Tower (and how could candidate Trump not have known about it?) is a game changer in the growing Trump-Russia scandal. Every media outlet seems to be interviewing legal experts about the repercussions of Don Jr.’s big adventure, basically asking, “Was it Illegal? And if so, what laws were broken?” In a separate story, Politico surveyed a range of lawyers about who might be liable and for what. Politico got a range of answers, from a list of laws that may have been broken (from former Nixon White House Counsel John Dean, who served four months for his Watergate role) to “a nothing burger with some secret sauce” (from Saikrishna Prakash, James Monroe distinguished professor of law at the University of Virginia) to “Donald Trump Jr. has helped the prosecution by establishing motive” (from Peter Zeidenberg, who served as an assistant special counsel in the prosecution of I. Lewis “Scooter” Libby).

Many suggest that early use of the term “smoking gun” to describe conclusive evidence of a crime came from a Sherlock Holmes short story, The Adventure of the Gloria Scott (a false clergyman was holding a smoking pistol). As the Watergate story and scandal grew, the term “smoking gun” was used frequently, as pundits wondered what would be the smoking gun that finally sealed Nixon’s fate.

Maybe the analogy has outlived its usefulness. Kathleen Parker of The Washington Post suggested that Don Jr.’s idiocy was “the mother of all tipping points.” (Although she also said the emails weren’t a smoking gun, they were a blazing gun.) At New York Magazine, Frank Rich, who already reminded us that “Watergate didn’t become Watergate overnight, either,” has a new, different take:

There will be no single smoking gun that will bring down this White House. It will be death by firing squad — or perhaps a sequence of firing squads — as the whole story inexorably pours out of the administration’s smoldering ruins.

So do we have our smoking gun yet in the Trump-Russia scandal? Maybe not — but the weapons are locked and loaded.

← Trump’s ‘voter integrity’ panel is a joke — and a serious threat (UPDATE)
Donald Trump Jr. ‘can’t wait for 4 years to be over.’ How do you think the rest of us feel? →

1 Comments on “What will be the Trump-Russia equivalent of Watergate’s smoking gun?”

1984: At least 1,000 people were killed as Indian troops stormed the Golden Temple in Amritsar, India, which was being held by Sikh militants. Click Political murder of the day for details.