Trump visit to Israel could mean land mines ahead 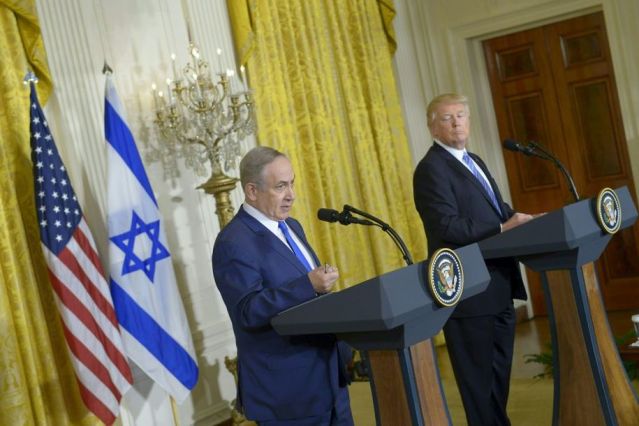 Things may not be so chummy when Trump meets with Israeli Prime Minister Benjamin Netanyahu this week.

No doubt Donald Trump hoped the Israel leg of his first foreign trip as president was going to be a piece of cake. Instead, the whole thing might crumble more quickly than poorly baked mandelbread.

During the 2016 campaign, Trump bragged that he would be Israel’s best friend. He would move the U.S. Embassy from Tel Aviv to Jerusalem. He loved Israeli settlements on the West Bank and chose David Friedman, an outspoken supporter of those settlements, as the U.S. ambassador to Israel.

Israeli Prime Minister Benjamin Netanyahu made no secret of his disdain for President Barack Obama during his two terms and no doubt thought he had a more friendly ally in No. 45. But the meetings between the two leaders are bound to be testy for several reasons:

How many ways can you say “unpresidential”?

Trump’s see-sawing statements on Israel have other countries’ diplomats scratching their heads, or at least shaking them. First he wanted to move the U.S. embassy to Jerusalem; now he wants it to stay in Tel Aviv and is set to announce that during this trip. First he was for a two-state solution, then he wasn’t sure, and now Middle East peace should be no problem. First he was for settlements, then against them. Now, who knows?

No serving U.S. president has ever visited the Western Wall because of the U.S. policy that Jerusalem’s status is part of the ongoing negotiations between Israelis and Palestinians. (Some have gone before or after they’ve held office.) Trump is going, but his team is botching that, too. According to a report from The Times of Israel:

The US delegation reportedly rejected the request for Netanyahu to join the visit, saying it would be “a private visit” by the president and that he would go on his own. The Israelis then asked whether a TV crew providing live coverage of the Trump visit could at least continue to film here there.

At this point, the TV report said, a senior American official rudely responded: “What are you talking about? It’s none of your business. It’s not even part of your responsibility. It’s not your territory. It’s part of the West Bank.”

These comments led to vociferous protests by the Israelis, with the discussion descending into shouting, and the Israelis reminding the US team that the Western Wall and adjacent area “is territory holy to Israel.” …

The TV report quoted Israeli officials involved in the discussions with the Trump preparatory team describing them as “boorish” and “arrogant.” One was quoted saying of the presidential visit, “It’s the Trump. Everybody else is a mere extra, including Netanyahu.”

“Boorish” and “arrogant.” Not exactly effective diplomacy at its best.

Meanwhile, Israeli intelligence officials remain furious at Trump’s leaking of intelligence on ISIS to Russians, even as Israeli Defense Minister Avigdor Liberman still publicly reiterated the “deep, significant” ties between the two countries. But the worst part is that Israelis knew that something like this was bound to happen, given Trump’s lack of comprehension about the need for secrecy and his total lack of impulse control. A revelation like this—that Trump had shared the ISIS intelligence with Russian officials—was something Israel had feared since January, said an Israeli intelligence officer, according to a report from BuzzFeed.

“We have an arrangement with America which is unique to the world of intelligence sharing. We do not have this relationship with any other country,” said the officer, who spoke to BuzzFeed News on condition of anonymity as he was not granted permission to speak to the press.

“There is a special understanding of security cooperation between our countries,” they said. “To know that this intelligence is shared with others, without our prior knowledge? That is, for us, our worst fears confirmed.”

The progressive Israeli publication Haaretz ran a piece with a wrap-up of what to expect during Trump’s trip to Israel, which will last two days and is scheduled to include visits to Jerusalem and Bethlehem. Trump is due to meet with both Netanyahu and Abbas.

In the beginning, Donald Trump was the Israeli right’s messiah, writes Chemi Shalev. He will move the U.S. Embassy to Jerusalem, he will allow us to settle and annex, he will throw the two-state solution into the dustbin of history. Compared to such redemption, what difference does it make if Trump nurtures extremism, winks at anti-Semitism, or turns a blind eye to racism?

Then Trump morphed into the left’s surprise savior. He will put Benjamin Netanyahu in his place, he will keep the embassy in Tel Aviv, he “understands,” as [former Israeli Foreign Minister] Tzipi Livni said, “how an agreement with the Palestinians is important to Israel.” Compared to such a godsend, what difference does it make if Trump torments democracy, cozies up to dictators, or erodes the liberal values that are supposedly the left’s guiding lights?

It is clear that tension with the Trump administration over letting the Russians have Israeli intelligence is the last thing that the government of Prime Minister Benjamin Netanyahu needs at the moment. … With the carelessness that he is known for, Trump is now getting himself entangled inside that sensitive triad of intelligence, the administration, and the media.

A story in The Atlantic described Trump’s lack of coherency about Israel (not that he’s coherent about anything else, mind you):

Trump’s blithe faith in his ability to solve the Israeli-Palestinian conflict seems rooted in the same essential ignorance about issues that has manifested itself elsewhere. …

[Trump] first refused to take an official stance on Israeli settlements in the West Bank, reversing longstanding American policy of opposing new settlements. That cheered the Israeli right but rattled the international community, Palestinians, and liberal Israelis. Two weeks later, he went even further, saying he had no particular commitment to the two-state solution. “I’m looking at two states and one state, I like the one that both parties like,” the president said at a White House press conference with Israeli Prime Minister Benjamin Netanyahu. “I can live with either one.” …

“There is no reason there’s not peace between Israel and the Palestinians — none whatsoever.” That statement begs not to be taken seriously, and Trump almost certainly did not mean it seriously. He’s aware that there are reasons why there isn’t peace. But is he aware of what those reasons are? … Trump has almost never spoken in any detail about the barriers to peace. Instead, he continues to discuss it as though it’s a real-estate transaction—just a matter of getting the right things for each side.

And in some ways, it is a real-estate transaction, except that such an understanding undersells the complexity of the problem, which, as mentioned, has bedeviled generations of American diplomats.

“There is no reason there’s not peace between Israel and the Palestinians — none whatsoever,” Trump said. That’s why this easy-peasy problem is on son-in-law Jared Kushner’s lengthy to-do list. “If you can’t produce peace in the Middle East, nobody can,” Trump said of Kushner. Yeah, right.

Maybe all of these predictions will come to naught. Perhaps Trump will be applauded wildly and greeted with waving palm branches. But why would we expect a better outcome from Trump’s trip to Israel than we would expect of his travels anywhere else? Or from his behavior at home?

Travels with Trump might not be the feel-good story administration officials were hoping for to escape the growing mountains of incrimination in the U.S. over how Trump has handled all the aspects of the Russia investigation. Yet they have no one to blame but themselves.