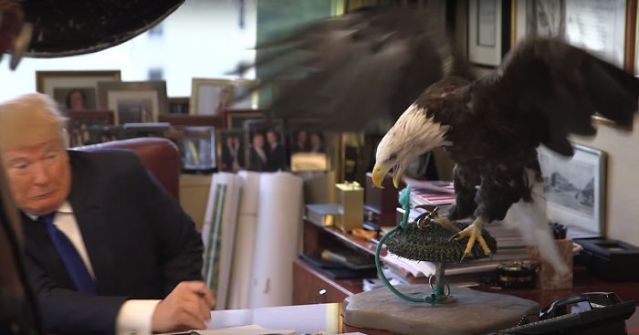 Even the bald eagle doesn’t like Donald Trump. He should have taken the hint.

As we close in on Donald Trump’s first 100 days as president, let’s take stock of just how little the new president has accomplished. Don’t worry, there won’t be a quiz. And if there were, it would be graded on a curve, just like the media grade Trump.

Things that happened that he had nothing to do with but claimed credit for:

Failures (remember that Trump’s “Contract with the American Voter” listed 10 pieces of legislation in his “100-day plan.” Here are just a few that didn’t happen or were killed):

Promises abandoned (at least for now):

It’s “the most failed first 100 days ever,” said presidential historian Douglas Brinkley in a story in The Independent. “I don’t know how it can get much worse.”

One hundred days of Trump already feels like years, but there are 1,361 days to go before the next inauguration. So what does the rest of the world think about Trump’s first 100 days? We’ll sum it up in a tweet from NBC News Chief Foreign Correspondent Richard Engel: