Signs of hope for Democrats in 2018? A cautious yes 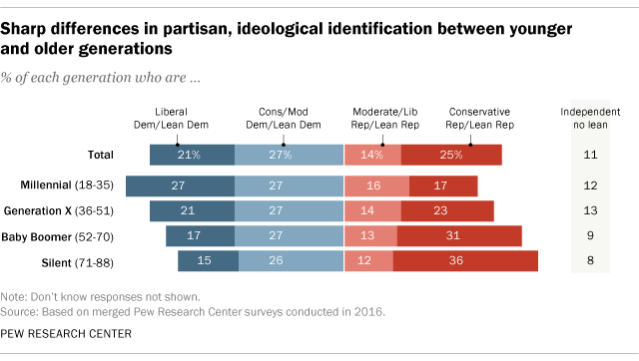 Midterm elections in 2018 offer an uphill battle for Democrats, with gerrymandered House seats and 25 Democratic incumbent senators facing re-election. But factors ranging from better numbers in recent polling to surges in candidate recruitment — especially women — could mean good news for Team Blue, both next year and in the long term.

At the state and national levels, many people nationwide are lining up to run for office as Democrats in November 2018. President Trump’s dismal approval rating, which started out low and is creeping lower, isn’t helping the Republican cause. Polling shows that the voters of the future are more likely to be in the “D” column than their older counterparts.

The Pew Research Center delivers insights into views that most people already know or at least suspect: Young adults don’t like President Trump, while older adults do. And the future of voting lies with those who are going to be around longer.

Recent information from Pew Research shows a deep partisan divide by age among Americans. And the generational ideology gap is growing wider: The Pew figures show that 27 percent of millennials identify as liberal Democrats, while 38 percent of the “silent” generation (71-88 years old) identify as conservative Republicans.

A new AP poll also spells bad news for Republicans in the future: 57 percent of those age 18-25 consider Trump’s presidency illegitimate. A full 62 percent of young adults disapprove of the job he’s doing as president, and his approval rating with this age group is only 22 percent.

All those signs, as well as the energy of the thousands and thousands of people attending town halls and lighting up their elected representatives’ phone lines in favor of keeping the Affordable Care Act, might mean better results on election night. But partisan gerrymandering, voter ID laws, other forms of voter suppression, and typically lower Democratic voter turnout in midterms might make those future trends less consequential.

That is — unless those voter suppression tools can be reversed or at least neutered, unless good Democratic candidates run for office, and unless more people turn out to vote. No one is being a Pollyanna here, but there may be hope ahead, especially from women candidates.

The AP poll isn’t all good news for Democrats, but at least it’s worse for Republicans. The survey was funded by the Black Youth Project at the University of Chicago.

Just a quarter of young Americans have a favorable view of the Republican Party, and 6 in 10 have an unfavorable view. Majorities of young people across racial and ethnic lines hold negative views of the GOP.

Views of the Democratic Party are most favorable among young people of color. Roughly 6 in 10 blacks, Asians and Latinos hold positive views of the party. Young whites are somewhat more likely to have unfavorable than favorable views, 47 percent to 39 percent.

As for Trump, 8 in 10 young people think he is doing poorly in terms of the policies he’s put forward and 7 in 10 have negative views of his presidential demeanor.

The age separations in the Pew Research numbers show that it’s not just millennials and silents who are divided politically. The figures from Pew show that millennials and those from Generation X (ages 36-51) see themselves as liberal or moderately liberal and leaning toward Democrats. Baby boomers and silents skewed Republican and conservative.

Another interesting point from Pew: The percentage of independents, at least in the Pew Research numbers, has shrunk. The percentage of those with no party identification has gone from 17 percent in 2000 to 11 percent in 2016. Usually that total changes little from year to year. But as the numbers of partisans, both liberal Democrats (especially!) and conservative Republicans have grown, the number of no-label voters has grown smaller. 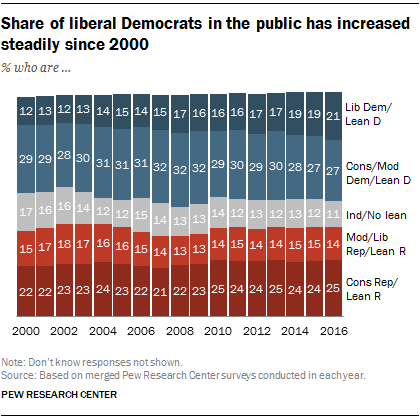 It’s no secret that Democratic candidates have received more overall votes than Republicans in recent elections, even if that doesn’t mean that Democrats win more races. In the presidential race, Hillary Clinton received 65,844,610 votes to Trump’s 62,979,636, a percentage difference of 48.2 percent to 46.1 percent. In Senate races (slightly skewed, because two Democrats were running against each other in vote-heavy California), Democrats earned 10,512,669 more votes than Republican candidates. Yet the Republicans retained their majority. In the House, Republicans received 49 percent of the vote, contrasted with Democrats’ 48 percent, yet they hold 55 percent of the seats.

To recover completely, the Democratic Party must grow at state levels, and there’s growing interest there. A recent meeting coordinated by the Democratic Legislative Campaign Committee included some 20 groups from across the country, from labor unions to outside funding groups. According to a story from NBC News:

Democratic officials have had to add extra candidate training sessions to keep up with demand and increase enrollment in existing ones. One major training group, Emerge America, reports an 87% surge in candidate applications over last year.

The women’s group Emily’s List says nearly 10,000 women have expressed interest in running for office since November, including for state legislative seats. Meanwhile, Run for Something, which is focused on recruiting millennials, says it has heard the same from almost 8,000 young people. …

“Everything has changed,” Jessica Post, the DLCC executive director, said in an interview in her office.

What about the Republicans at the state levels?

Ellie Hockenbury, the spokesperson for the Republican Legislative Campaign Committee, said the GOP has already found strong candidates for this year’s races, though they’re just getting started on next year’s midterms.

There is plenty of anecdotal evidence of high Democratic interest in running for local races, too. There was a surge in interest by women candidates who attended a “Ready to Run” program at Rutgers University in New Jersey. Those same kinds of programs also are starting in other states. Even if some of those candidates ultimately decide not to run, the numbers are improving.

The group Run for Something was launched to capture the enthusiasm of young protesters after Trump’s election and the millions of people who came out for the Women’s March. It wants to get potential candidates to take the next electoral step. It’s focusing on helping millennials run for office, aiming in 2017 for Virginia and North Carolina. According to a story in Mother Jones:

The idea isn’t just to supply candidates where none are currently running; the group believes the bench is too thin everywhere because Democrats are too exclusive in how they pick out candidates. “Parties are usually focused on asking their electeds, their staff, their networks, who they think should run,” [Run for Something Co-founder Amanda] Litman says. That helps build a pipeline, but it’s also an echo chamber that makes it difficult for new faces and voices to penetrate. It can be intimidating, she argues, for a prospective candidate to figure out how to run, without an organization to walk him or her through it. “So we’re trying to reach people who, one, might not ever be approached by a party or by a recruitment network, or two, might not be comfortable raising their hand if the party asks, ‘Who wants to run?’ ” In other words, women, people of color, and members of the LGBT community—all under the age of 35.

As the Mother Jones story points out, there’s no time to lose:

The quest to rebuild the Democratic bench is a long-term fight with one ominous deadline in sight. The next round of redistricting is coming up in 2020, and Democrats are still paying the price for their catastrophic losses ahead of the last redistricting. If they can’t get a foothold in state legislatures before then—they currently control both houses of the legislature and the governor’s mansion in just six states—things stand to get even worse.

There are other groups, too. Brand New Congress was started by supporters of Vermont Sen. Bernie Sanders specifically to elect just what the name implies: it’s aiming for 400-plus candidates. Higher Heights is hoping to find and help elect more black women candidates.

In my own town (admittedly a hotbed of progressive activism—we had an 87 percent turnout in the November election and went heavily for Hillary Clinton) there are contested races for the village board and two school boards. Even the library board has 10 candidates running for four spots.

The most important number, however, is the number of voters who show up on Election Day. Republicans historically have a midterm edge, since older voters tend to be more reliable for those elections. Recent voter turnouts in big-city municipal primaries don’t offer much hope. In Los Angeles, turnout in the mayoral primary was first reported at 11 percent but grew to 17 percent once all of the mail-in ballots were counted. At least that’s better than the 11 percent turnout of years past. In St. Louis, turnout in that city’s mayoral primary was 28 percent—again, better than the 22 percent of four years ago, but nothing to brag about.

Yet midterm elections usually show a downturn for the incumbent president’s party. But in the age of Trump, all bets may be off.

It’s still a long time until November 2018. But you’ve gotta hope it will be buried in a sea of pink pussy hats.

1916: Karl von Stürgkh, the minister-president of Austria, was shot and killed in a Vienna hotel after a series of severe actions and restrictions he imposed on the country during World War I. Click Political murder of the day for details.