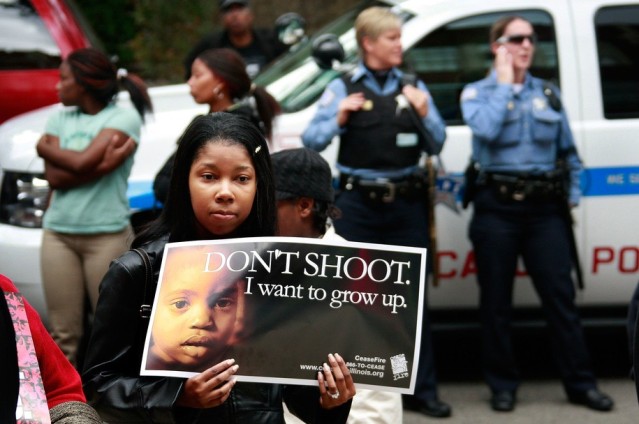 Chicago’s gun violence numbers are horrific. But returning to the days of unlimited police power is not the answer.

News about the wide swath of U.S. attorneys leaving office mostly focused on Preet Bharara, the U.S. attorney for the Southern District of New York until he was summarily fired, despite an earlier promise from President Trump that he would be kept on. But another outgoing U.S. attorney made news of his own.

Zachary Fardon, who resigned as Chicago’s top federal prosecutor after being directed to by Attorney General Jeff Sessions, released an open letter on his way out the door essentially saying it’s time to take the handcuffs off police. The now-former U.S. attorney for the Northern District of Illinois criticized a 2015 agreement between the Chicago Police Department and the American Civil Liberties Union that halted the CPD’s widespread use of stop-and-frisk actions, saying it “swung the pendulum hard” away from proactive law enforcement.

Few would argue against humane and effective proactive law enforcement such as community policing, especially when it will lower shootings in Chicago. Fardon is hardly the only one looking for solutions to Chicago’s epidemic of gun violence, and his letter contains some reasonable suggestions and honest points shared by others. But let’s not pretend that increased use of stop-and-frisk is the way to lower the number of shootings.

Many groups, including the Chicago Tribune, publish a running total of shooting victims in the city. Last year’s total was nearly 4,400. So far in 2017, there have been more than 600. There are so many factors feeding the high incidence of gun violence: a dearth of jobs in the hardest-hit neighborhoods, high unemployment, poverty, a disappearing manufacturing base, lack of new business development, gang prevalence, easy access to out-of-state guns, gun trafficking, threats of violence spread on social media, overall distrust of police, and a drop in proactive stops by police.

Fardon’s letter blamed the 2015 ACLU-CPD agreement for stopping police from doing their jobs. Much of the reason for the agreement grew out of the release of the Laquan McDonald video in November 2015, a year after the teenager was gunned down by a Chicago cop. Days of demonstrations ensued, and the officer, Jason Van Dyke, was charged with first-degree murder. (There is still no date set for his trial.) “That ACLU deal grew out of a lawsuit about stop and frisk, but the contract that settled the lawsuit swung the pendulum hard in the other direction by telling cops if you (officer) go talk to those kids on the corner, you’re going to have to take 40 minutes to fill out a form, and you’re going to have to give them a receipt with your badge number on it,” Fardon’s letter said.

The “form” Fardon refers to is a two-sided (rather than one-sided, which it used to be) incident report police officers must fill out after a street encounter. Yes, Chicago cops absolutely hate filling out the report, as evidenced by the rants on a Chicago police blog (not recommended reading for those who still want to believe the police are here to “preserve and protect”). But turning over a sheet of paper is hardly the difference between effective policing and ignoring crime.

The “receipt” he refers to is just that—a paper given to an individual who has been stopped, so that individuals have a record of who stopped them, presumably in case a complaint is made. That requirement came about because of a state law passed in 2015, the Police and Community Relations Improvement Act.

Fardon’s letter was quickly criticized by the ACLU of Illinois, which called Fardon’s remarks a “blindsided attack.” According to a story in the Chicago Tribune:

Karen Sheley, the police practices director for the ACLU of Illinois, said Fardon’s opinions were out of line with the Justice Department’s own investigation that found widespread constitutional abuses of citizens, particularly in low-income minority neighborhoods where the majority of street stops occur.

Fardon also “wildly exaggerated” the time needed to fill out the form and ignored “the real impact and harm of these stops,” which occurred far too often and under suspect or unconstitutional circumstances, Sheley said in an emailed statement.

“These stops were often invasive — with officers reaching inside someone’s clothing — and intrusive, happening repeatedly to the same person,” Sheley said. “The lack of oversight of the stops reflect the same systemic deficiencies identified in the Department of Justice report on the CPD issued early this year.”

Citing statistics from the ACLU’s own research, Sheley said police conducted more than 700,000 street stops in 2014 that yielded no guns and resulted in not a single arrest.

According to the ACLU research, 72 percent of those stopped by police were African-American, even though only 32 percent of Chicago’s population is black. Further, the ACLU said, in nearly half the cases the organization reviewed, police either didn’t bother listing a reason for the stop or wrote a false reason.

The ACLU put out its own response to Fardon’s letter.

These low-benefit stops came at a high cost — they further damaged the relationship between the community and police. If Chicago is to address its gun crime and establish community policing that instills confidence of all residents, stop and frisk must be monitored and measured. This is what our agreement is doing.

Don’t forget that unlimited stop-and-frisk was ruled unconstitutional in New York in 2013, even though then-GOP nominee Donald Trump refused to believe it in a presidential debate in 2016. An analysis by the New York Civil Liberties Union of those stopped and frisked by police between 2003 and 2015 found that “nearly nine out of 10 stopped-and-frisked New Yorkers have been completely innocent, according to the NYPD’s own reports.” The vast majority of those stopped were African-American and Latino.

As U.S. attorney, Fardon made gun violence his office’s top priority when he took over in 2013. His farewell letter (as summarized by the Tribune story) also “urged the city and Justice Department to push through a consent decree for sweeping changes at the Police Department, called for federal and local police to ‘flood’ neighborhoods afflicted by rampant gang crime, and labeled social media as what’s driving ‘the virus of gunplay’ among young people.”

Fardon specifically rejected some of the more draconian ideas bandied about by Trump, including Trump’s call to “send in the feds,” e.g., the National Guard. But he sees a need for an increased role for local and federal law enforcement, and he wants more lawyers in the U.S. attorney’s office, which has been short-staffed since budget sequestration.

Attorney General Sessions is using some of the same language with his “tough-on-crime” agenda. Sessions met with several police chiefs this week, including Chicago Police Superintendent Eddie Johnson, but he admitted he didn’t have funds for extra support. One of Sessions’ favorite initiatives is a Virginia program called Project Exile. A story on Talking Points Memo quotes an AP report:

[Project Exile is described as] aggressive prosecution of gun offenses under federal laws, instead of the weaker state statutes. Conviction on a federal gun charge carries a minimum, mandatory prison sentence of five years, bond is less available and defendants are sent out of state to serve their sentences.

“I will promote that nationwide,” [Sessions] said, calling the effort “a very discreet effective policy against violent crime.” …

Law enforcement officials, including FBI Director James Comey, credit Project Exile for a drop in murders in Richmond. But critics have said the program that began in the 1990s was racially biased and point to other reasons for declines in crime. Federal judges at the time expressed concerns about the wisdom of having federal agencies take over functions historically reserved for state and local law enforcement.

Giving more power to police to stop and frisk even more residents is not an effective way to restore faith in law enforcement. It will make people even less willing to cooperate with police when crimes are committed. Community policing, while not a panacea, has been more effective in building relationships between police and neighborhoods.

The Rev. Michael Pfleger is the pastor at St. Sabina Catholic Church in Chicago’s Auburn Gresham neighborhood on the South Side, an area with its own share of violence. He’s a longtime leader in the fight against gun violence. He challenged Trump’s frequent criticisms of Chicago and Trump’s simple-minded solutions by inviting the president to come to Chicago. So far, there’s been no response (no surprise). Pfleger often shares his thoughts and frustrations on Facebook posts, and he doesn’t mince words, often in all caps. And he thinks stop-and-frisk is the wrong way to go.

“President Trump, since you say you’re concerned…I INVITE YOU TO ST. SABINA TO SIT DOWN WITH THE COMMUNITY AND LISTEN TO OUR CONCERNS ABOUT THE VIOLENCE AND WHAT’S NEEDED,” Pfleger wrote. “If it’s federal resources, don’t wait… SEND THEM NOW! If he’s talking about federal troops, stop-and-frisk and militarized police, which I believe he is… ABSOLUTELY NOT!”

Take it from someone in the community: the days of unlimited stop-and-frisk need to be swept into the dustbin of history.

1989: Tiananmen Square Massacre: As many as several thousand Chinese were killed and tens of thousands of protestors were arrested when 200,000 Chinese troops and police stormed Beijing’s Tiananmen Square. Click Political murder of the day for details.