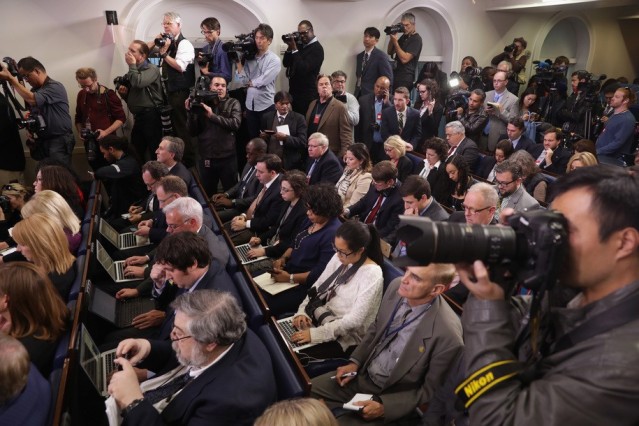 A new report offers some insights into the changing ways younger Americans consume news, and the news isn’t particularly good for the nation’s news media.

The study shows that younger people view the news with distrust and do their own research to verify or clarify facts. Overall, they tend to trust video (especially user-generated video) more than the written word, but they see bias as inevitable in whatever news they encounter. They find news online—or else it finds them first, as it populates their social media feeds.

The Knight Foundation, a group founded by John S. and James L. Knight of the old Knight Ridder newspaper chain, released a report with a complicated message on how teens and young adults get their news and how much they believe of what they see or read. “How Youth Navigate the News Landscape” shows that most young people are bombarded with news on all of their devices from all kinds of social media—and that they view it with huge measures of salt.

Here are some of the themes that were expressed repeatedly by focus group participants:

“Everyone already has their biases,” one respondent said. “As long as you’re really aware of them, you can make a better opinion about something. And it’s better to get it from multiple sources. At the very least, you have a bunch of facts to work with, instead of just one person’s particular story or agenda.”

Sort of puts the old 1960s statement of “Don’t trust anyone over 30” into a new context.

In summer 2016, in the midst of the presidential campaign, the Knight study held a series of 90-minute sessions with six focus groups of people, male and female of different races and ethnicities, between the ages of 14 and 24 in three different cities. While that is obviously a young cohort, it does represent the future of news consumption. From the report:

Today’s young news consumers face a dizzying array of options for getting their news. While their parents’ generation relied on print media, television, and radio, teens and young adults now have an ever-expanding suite of platforms to supplement those traditional formats; news and magazine websites, blogs, social media, messaging apps, text alerts, online video, GIFs, emojis and even virtual reality experiences may play a role in how today’s youth engage with the news. Less than a decade ago, simply getting any kind of news on a mobile device was considered a leading-edge activity.

Today, news consumption has become mobile by default. Smartphone-based news consumption has increased notably in the past two years, such that 89 percent of mobile phone users in the U.S. now access news and information on their devices. These shifting trends in consumer behavior are also evident in traffic patterns; the majority of the top 50 digital news websites reported in 2015 that visits from mobile devices outpaced those from desktop computers.

Focus group participants all reported that news pops up in all social media feeds, whether the person is seeking news or not. “Typically, a lot of times, I’ll look at the news by accident. Like I accidentally swiped left,” one participant said. “If I don’t see it on social media, I’m not going to hear it,” said another.

Respondents also put more stock in user-generated content, such as cell phone video that can counter the official evidence from law enforcement.

Video, especially live video, is generally considered to be more reliable than many other news sources. Young adults believed that individuals on the ground would have less motivation to manipulate the footage than a media company. For instance, video taken by a protester filming from inside a march held more credibility for many than CNN’s coverage professionally filmed from a few feet away and then later edited for repeat airing.

Even what younger news consumers call “news” goes outside the boundaries of traditional journalism. But the report points out that that definition is changing even within news organizations. “Historically, definitions of what qualifies as news have been codified by large professional journalism outlets that have also served as gatekeepers of the news,” the report says. “But teens and adults have little if any experience with that world.”

There is lots of material in the report and many quotes by participants, some spot on and some that make the respondent sound uninvolved and naive (two of the focus groups were teenagers, after all). Traditional media’s role ends up being a kind of verifier of material found elsewhere. As the Knight study concluded:

The news forms that teens and young adults encounter are also extremely varied and multidimensional. A story featured on Snapchat may also be discussed on Twitter. That same story may be encountered through CNN on television, which then integrates comments on Twitter. … In this fast-paced environment, our participants said that they may first notice a story circulating through social media channels, but they won’t always trust it as being real until they see it reported by a more traditional source. In this way, young people experience the role of the mainstream media as the “elevator” of stories rather than the “originator.” In an era where for most young people printed newspapers and viewing  the news at set times are no longer relevant, young people don’t follow the news as much as it follows them.

The conclusions from the Knight study were similar to conclusions from two studies from a year earlier, which found higher rates of media distrust and more news consumption from social media by younger adults. A study by Pew Research Center found that Millennials are one-and-a-half times more likely to get news from Facebook than from TV news. “Social media look to be the local TV of the Millennial generation,” the Pew study says.

Another study by the Media Insight Project, a collaboration of the American Press Institute and the Associated Press-NORC Center for Public Affairs Research, found that 69 percent of Millennials seek out news at least once a day, and 40 percent look for news several times a day. Four out of 10 also pay for at least one news-specific service, app, or digital subscription. It’s no surprise that national papers have been pushing online subscriptions in an attempt to gain readers, especially younger ones.

Which brings us to the final point: There was one traditional news source younger people relied on even more than their elders: national newspapers. As long as they could read those papers online.

According to a recent survey from the Pew Research Center, during the 2016 election, people 18-29 and 30-49 got their news at much higher rates from The New York Times, The Washington Post, and The Wall Street Journal than did those 50 and older. From the Pew survey:

Both The New York Times and The Washington Post were regular election news sources for about two-in-ten adults ages 18-29 and 30-49, roughly twice the rate of older age groups. For The Wall Street Journal, 15% of 18- to 29-year-olds and 12% of 30- to 49-year-olds regularly got election news there, higher than those ages 65 and older (7%), but about on par with 50- to 64-year-olds (8%). All age groups were about equally likely to get election news from USA Today. …

The Washington Post, The New York Times, and The Wall Street Journal have aggressively pursued online audiences, which tend to be younger. And indeed, attracting these younger, digital readers may help grow digital advertising revenue and even subscriptions. Nonetheless, most publishers still rely more heavily on print dollars. In other words, attracting young readers may be just one step in securing newspapers’ future.

1782: John A. Treutlen, a German immigrant who served as Georgia’s first governor, was killed outside his home in what became Effingham County, Georgia. Click Political murder of the day for details.