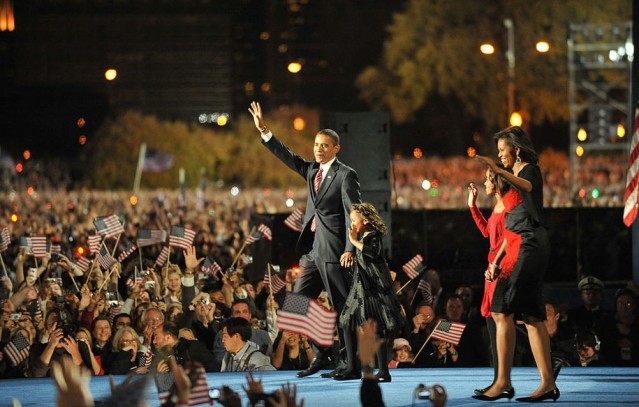 As the Obama presidency winds down, we all have memories of times over the last eight years of how Barack Obama showed us what it means to be a successful president. These are my memories, starting at the very beginning.

Election night 2008 was really a time of hope. Even Mother Nature cooperated; the temperature that Election Day was in the 70s in Chicago (in November), ensuring that the huge crowds expected at Grant Park wouldn’t freeze. Everyone there thought, “Yes, we can.”

That was before the insults, the backstabbing, and the lies. Before Republicans huddled together and vowed not to support any of Obama’s initiatives. Before blowhard Rush Limbaugh announced on his radio talk show that “I want him to fail.” Before the tea party. Before Rep. Joe Wilson yelled, “You lie!” during a 2009 address to a joint session of Congress.

No, on that night, we all still had hope. And thanks to the Obama presidency, we still do.

On that election night in 2008, our family rode the El downtown to join the huge number of people waiting for the president-elect, excitedly checking election returns on our cell phones. As we walked down Roosevelt to Columbus Avenue, we passed the many street entrepreneurs hawking Obama buttons and T-shirts. Some had photos of him along with Martin Luther King with phrases like “The dream lives on.” Some (which I saw many African-American girls wearing) said, “I love Michelle.” Some had a picture of Obama, Michelle, and the girls saying, “Our new first family.” One simple one had Obama’s picture with the words, “Our president is black.” Needless to say, the hawkers were doing a booming business.

Because our older daughter worked for the campaign, we were lucky enough to be in the center section, which means that we would be able see the new first family, although from a distance of 150 feet. We joined the throngs in front of the stage after passing through multiple layers of security to watch with some 350,000 others. Luckily, the jumbotrons set up around the park allowed everyone to see.

There’s always media overkill in every election. But that night, there were dozens upon dozens of media booths set up in an “L” formation at the back of the fenced speaking area. Besides U.S. media, there were TV stations and media outlets from around the world. Everyone knew that this would be a historic night.

As we watched CNN on the jumbotrons, it was left to Wolf Blitzer to give us the news that Barack Obama had just been elected the 44th president of the United States.

The entire park erupted. There were cheers, tears, hugs, fist pumps, and screams. People jumped in the air and exchanged high fives. (Even now, I choke up when I watch this.) Attending the victory rally meant being a part of history.

Before Obama came out, we all watched McCain’s concession speech on the jumbotrons. Being a Democratic crowd, we were polite, and many applauded McCain, even though some of his supporters in Phoenix still booed at the mention of Obama’s name. I guess some things don’t change. (We couldn’t bring ourselves to applaud Sarah Palin, though.)

Obama and the new first family came out to thundering and overwhelming cheers. It was hard to see through the waves of personal cameras and cell phones everyone held up to capture the moment. Behind us was what looked like 200 TV cameramen and still photographers.

This was truly a world event. On the way out, my husband and I, both wearing our Obama T-shirts, were interviewed by a reporter for a TV network in Spain. Everywhere we saw cameras from all over: Israeli TV, the BBC, Japanese stations, etc., etc. We spoke to a woman in the crowd who said she was from the Czech Republic but that she just had to be in Chicago on that Tuesday night.

After the rally, perfect strangers hugged each other. Groups performed impromptu Obama cheers. Shortly after midnight, we traveled through the West Side on our way home on the El. Both black and white families on the trains talked to their children about the significance of being there that night. At each stop, we could see and hear jubilant young African-American men running through the streets of the West Side, yelling, “OBAMA WON! OBAMA WON!” It reminded me of the pride shown in Chicago’s 1983 mayoral election when Harold Washington became the city’s first black mayor. Later I would see that these celebrations were mirrored around the country.

As an Illinoisan, I had the chance to see Obama a few times in person when he was running for the Senate in 2004. I even got to talk to him once.

The first time was in March 2004, when he was in a crowded field running for the Democratic nomination for Senate. Multimillionaire businessman Blair Hull was leading in the polls, mostly on the strength of heavy advertising and sponsoring bus trips of seniors to Canada to buy cheaper prescription drugs. But Hull was undone by ugly reports about his divorce concerning threats against his wife.

The race became Obama’s to win. One Saturday, my then-17-year-old daughter, some of her friends, and I went to a West Side AME church for a campaign rally featuring Obama and his family. Obama was a state senator, and many Illinois lawmakers joined him at the rally. Michelle talked about why she married him. Malia and Sasha must have been 6 and 3 and were running around the church, as you would expect kids that age to act.

When Obama started speaking, it didn’t take long for everyone in the room to be hooked. I couldn’t tell you everything he said. He clearly spoke against the Iraq War and talked about his successful legislation requiring police interrogations to be videotaped, including how he met with police across the state, persuading them of the need for such a law.

The entire rally was much like a church service, complete with preachers, choirs, and church musicians. When they passed the plate to collect campaign donations, I found myself writing a $100 check for my first-ever contribution to a political campaign. I got to shake his hand as he made his way down the aisle.

Obama went on to win the primary with 53 percent of the vote. His GOP opponent, Jack Ryan, was forced to drop out because of ugly details from the records of his divorce from actress Jeri Ryan (total side note: She was the Borg Babe, 7 of 9 on Star Trek: Voyager). After Obama’s star turn at the Democratic convention, Republicans were wary of taking him on, and the best they could do was conservative Alan Keyes, who actually lived in Maryland at the time and scrambled to establish Illinois residency. Obama would go on to win in November with 70 percent of the vote.

Before that, though, he attended a fundraiser for our local Democratic organization, the Democratic 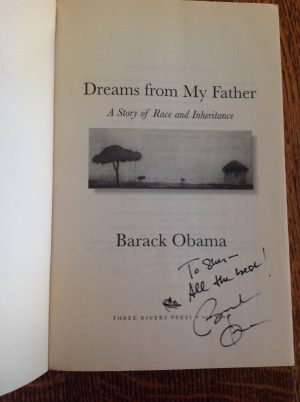 Party of Oak Park. Many of us brought along copies of Dreams from My Father, hoping for an autograph.

When it was my turn, he shook my hand and then signed the book. I told him that he was a good writer.

“Maybe for a politician,” he said, always self-deprecating.

Obama just looked at me and smiled as he handed me back my book.

So we head to the end of Obama’s presidency. He’s still got some speeches to give to elect Hillary Clinton and other Democratic candidates, and no doubt he’ll be a sought-after speaker in the years to come; how could he not be, with his rhetorical skills? He’ll write more books. He’s pledged to continue the work of the My Brother’s Keeper Alliance to mentor and provide opportunities for boys and young men of color.

The Obamas will be active in setting up the Obama Presidential Center on Chicago’s South Side, giving the community around Jackson Park a financial boost. I look forward to visiting and taking out-of-town guests there.

Sure, there have been disappointments, and he’s made some mistakes. How could he not? He’s a human being.

We know the long list of his accomplishments: saving the U.S. (and the world’s) economy with the economic stimulus package; saving the U.S. auto industry with the auto bailout; overseeing the creation of 15 million new jobs; signing the Affordable Care Act, which gave health coverage to 20 million more Americans; getting Osama bin Laden; getting rid of Don’t Ask, Don’t Tell; fighting for the Supreme Court’s ruling on marriage equality; boosting alternative energy; getting the Iran nuclear deal; and getting the Paris climate agreement, just to name a few. (I realize some of these fall into Congress’ and the Supreme Court’s purview, but let’s not get technical.)

So soon, all we’ll have are our memories.

I’ll never be able to think of Selma, Alabama, without seeing the Obama family marching across the Edmund Pettus Bridge on the 50th anniversary of the original march, with Obama holding the hands of civil rights pioneers Rep. John Lewis and 103-year-old Amelia Boynton Robinson, both of whom almost died during that march.

I’ll never be able to hear Amazing Grace in church without the echo in my head of Obama starting the hymn in his eulogy for the Rev. Clementa Pinckney, killed with eight others in the mass shooting at the Emanuel AME Church in Charleston, South Carolina.

And I’ll never forget this photo and what it meant for a little boy to feel that the president’s hair was just like his. The magnificent photos taken by White House photographer Pete Souza and his staff are routinely hung on the walls of the West Wing and rotated. This one, however, has stayed up the whole Obama presidency.

Nothing left to say but: Thanks, Obama.

← So NOW Republicans say Trump is unqualified?
It’s no fun to be a Republican in 2016 →

1949: The president and prime minister of Syria were shot and killed as part of a coup by a military junta. Click Political murder of the day for details.