The number of Clinton newspaper endorsements is YUUUGE 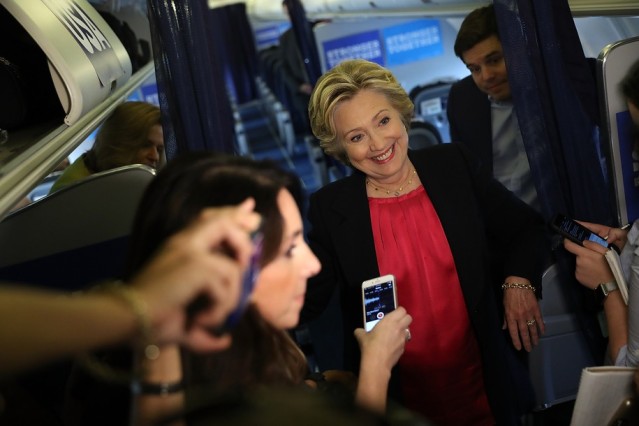 The printed newspaper may be turning into a dinosaur, but many of the nation’s newspapers are fighting for relevancy in 2016 by endorsing Hillary Clinton for president.

We expect endorsements for Democratic candidates by some newspapers, such as The New York Times. We don’t expect them from The Arizona Republic.

Many papers have yet to endorse. But Clinton has received the endorsements of more than 35 publications so far, including large and small newspapers and magazines; in the primaries, she received more than 80 endorsements. (The count is a compilation from Wikipedia; the Clinton campaign does not yet have a list of endorsements on its website, although it does tout the Arizona Republic endorsement on its campaign blog. But we might as well borrow some language from Trump and call it YUUUGE.)

In the primaries, Trump received the backing of four papers: The National Enquirer, the New York Observer, the New York Post, and the Santa Barbara News-Press, the only paper in California to endorse the Orange Menace. Keep in mind that David Pecker, the CEO of the National Enquirer, is a good friend of Donald Trump, and that the New York Observer is owned by Jared Kushner, Trump’s son-in-law. The Santa Barbara paper has faced several internal controversies over editorial interference from the paper’s owner, and the New York Post is, well, the New York Post. Outside of these, Trump has received ZERO endorsements from any major daily newspaper editorial board in the general election.

Do newspaper endorsements even matter anymore? Most likely not, with one exception: When the endorsement goes against the newspaper’s historic trend.

A 2007 study by the Pew Research Center showed, unsurprisingly, that most people aren’t swayed by newspaper endorsements. “A local newspaper’s endorsement of a candidate would have a mixed impact on the public — 14 percent would be influenced positively, 14 percent negatively,” Pew reported. (The focus of that research was actually on whether endorsements by celebrities and other well-known political and media figures swayed voters. No surprise—they also have little impact.)

Another 2011 study, this one from the National Bureau of Economic Research, concluded that when a paper breaks a pattern of endorsing candidates from only one party, those endorsements mean more to readers. A similar conclusion came from a February 2016 study from a Northwestern University economist. “Endorsements that are classified as surprising and consistent have the largest effect,” the study says. New York Magazine went so far as to suggest that “Trump Might Make Newspaper Endorsements Matter Again.”

The endorsement from The Arizona Republic:

The challenges the United States faces domestically and internationally demand a steady hand, a cool head and the ability to think carefully before acting.

Hillary Clinton understands this. Donald Trump does not.

Clinton has the temperament and experience to be president. Donald Trump does not.

The endorsement from The Cincinnati Enquirer:

Clinton is a known commodity with a proven track record of governing. As senator of New York, she earned respect in Congress by working across the aisle and crafting bills with conservative lawmakers. She helped 9/11 first responders get the care they needed after suffering health effects from their time at Ground Zero, and helped expand health care and family leave for military families. Clinton has spent more than 40 years fighting for women’s and children’s rights. As first lady, she unsuccessfully fought for universal health care but helped to create the Children’s Health Insurance Program that provides health care to more than 8 million kids today. She has been a proponent of closing the gender wage gap and has stood up for LGBT rights domestically and internationally, including advocating for marriage equality.

Trump is a clear and present danger to our country. He has no history of governance that should engender any confidence from voters. …

Our reservations about Clinton pale in comparison to our fears about Trump.

The endorsement from The Dallas Morning News:

Unlike Donald Trump, Hillary Clinton has experience in actual governance, a record of service and a willingness to delve into real policy.

Resume vs. resume, judgment vs. judgment, this election is no contest.

The endorsement from the Houston Chronicle:

Any one of Trump’s less-than-sterling qualities — his erratic temperament, his dodgy business practices, his racism, his Putin-like strongman inclinations and faux-populist demagoguery, his contempt for the rule of law, his ignorance — is enough to be disqualifying. His convention-speech comment, “I alone can fix it,” should make every American shudder. He is, we believe, a danger to the Republic. …

We’re confident that she is, indeed, “steady and measured and well-informed.”

The endorsement from The San Diego Union-Tribune:

Despite Trump’s insistence otherwise, [Clinton] has the better temperament to be president — and the experience, background and relationships with world leaders that we need in a president. …

Diplomacy. Collaboration. Patience. Mitt Romney, whom we endorsed for president in 2012, exhibited those same traits as the moderate governor of Massachusetts and the business-savvy savior of the 2002 Winter Olympics in Salt Lake City.

Vengeful, dishonest and impulsive, Trump is no Romney. This is why Hillary Clinton is the safest candidate for voters to choose in a complex world. …

This paper has not endorsed a Democrat for president in its 148-year history. But we endorse Clinton. She’s the safe choice for the U.S. and for the world, for Democrats and Republicans alike.

These endorsements came at a cost to these conservative-leaning publications. Readers canceled subscriptions, made angry phone calls, and trashed the papers on Facebook and Twitter. There were even death threats. According to a story in The New York Times, cancellations at the Arizona Republic were coming in “every 10 minutes.”

For some readers, however, the endorsements proved a step too far. “Certainly, we’ve paid a price for our presidential recommendation,” Mike Wilson, the editor of The Dallas Morning News, told [news media site] Poynter this month.

[Phil] Boas of The Arizona Republic said he expected “a lot of cancellations,” pointing to cancellations at The Cincinnati Enquirer, which like The Republic, is owned by Gannett.

But he said financial considerations were “never a factor” for the newspaper’s nine-person editorial board. “It was more of a curiosity,” he said. “We know we’re doing the right thing. We feel very good about this decision.”

Margaret Sullivan, the media columnist at the Washington Post, reported that in addition to the subscription cancellations, there were even protesters picketing outside the Dallas Morning News building after that endorsement. She asked rhetorically whether taking such a stand is worth it.

Does anybody think for a second that a newspaper editorial might be worth antagonizing a dwindling customer base and feeding into the already rampant claims of journalists’ liberal bias?

Isn’t this exactly why so many newspapers, according to the Columbia Journalism Review, stopped doing political endorsements?

Sullivan argued that endorsements are still worth the time and effort.

Which brings me to the second reason for writing an endorsement editorial — even if it proves ineffectual and even if it deeply angers some readers: Publishing them is the right thing to do.

Editorial boards are mostly made up of thoughtful, smart and well-informed journalists who have had a chance to study and discuss the candidates seriously. In some cases, they have had the chance to meet with them in person. They have a unique and important vantage point.

What’s more, they have a bully pulpit. In a contest this important and this close, they need to use it. They would be walking away from their responsibility if they thought first about making some readers mad enough to cancel, even temporarily.

Some papers that would normally back the Republican nominee, such as the New Hampshire Union Leader in Manchester, the Richmond Times-Dispatch in Virginia, and the Winston-Salem Journal in North Carolina, have endorsed Libertarian candidate Gary Johnson. It’s likely a few conservative papers waiting to endorse may follow suit, but many others may very well choose Hillary Clinton.

Johnson also received the endorsement of The Detroit News in what may be the worst endorsement timing EVER. The endorsement from the News, which has endorsed only Republican candidates since its founding in 1873, was announced hours after Johnson’s latest “Aleppo moment,” in which, during a town hall interview with MSNBC’s Chris Matthews, he was unable to name a single foreign leader he admired. This follows his infamous appearance on MSNBC’s Morning Joe in which Johnson demonstrated his lack of knowledge about the war in Syria when he asked, “What is Aleppo?”

By the next day, the Republican-leaning Chicago Tribune added its voice to the Johnson backers, calling him a “principled option” for president. Sure, if you like weed and don’t care about foreign policy. Sounds like the Tribune is having an Aleppo moment of its own.

Many of the nation’s newspapers will offer endorsements in the weeks to come, so the candidates will add to their totals. And it’s not fair to say that Trump hasn’t received any editorial endorsements. USA Today broke with its tradition of not taking sides in presidential races to warn readers not to vote for him under any circumstances. Trump is “unfit for the presidency,” the paper said, adding that America should “resist the siren song of a dangerous demagogue.”

UPDATE: More endorsements for Clinton: The Columbus Dispatch, a normally Republican endorser; The Atlantic, which has endorsed only three candidates for president in its entire history; The Wall Street Journal, which has an extremely conservative editorial board; and Foreign Policy, which has never before made an endorsement. Even the Idaho Statesman in that bright red state endorsed Clinton. She’s up to 115 endorsements now, and the number keeps growing.

And the Orange Menace finally got some endorsements for the general election. One was from the Santa Barbara News-Press; one from The Crusader, the official newspaper of the Ku Klux Klan; and one from The Las Vegas Review-Journal, now owned by casino mogul and GOP mega-donor Sheldon Adelson. Nice company you’ve got there.

← Chicago adds police to cut gun violence. But can drill rap be ‘policed’?
So NOW Republicans say Trump is unqualified? →