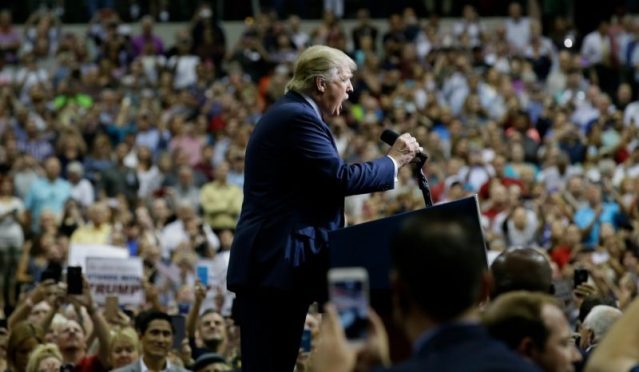 Once again, Donald Trump hoodwinked the media into thinking he was doing something real.

After a hurried, last-minute visit and a staged photo-op with Mexican President Enrique Peña Nieto, the Republican presidential nominee returned to his hard-line message on immigration in what his campaign claimed would be a policy speech but was really just more of his hate-filled rhetoric. The media, suckers that they are, have spent the past weeks wondering if the Orange Menace was really going to “pivot” to a more humane message about immigration to appeal to a broader audience for the general election.

The words “Donald Trump” and “diplomacy” don’t fit well together. In his attempt at meeting with another world leader, Trump looked awkward when he claimed that he and Peña Nieto didn’t discuss who would pay for the mythical wall that has been the centerpiece of his campaign. The Mexican president and his aides quickly put that lie to rest by saying afterward that, no, the meeting started with Peña Nieto saying Mexico would not pay for such a monstrosity. Democratic Vice Presidential nominee Tim Kaine mocked Trump’s trip as “diplomatic amateur hour.”

But because Trump wasn’t — I don’t know, drooling at that point? — U.S. media again swooned that he was being “presidential.” A few hours is all it took to dispel that impression, as Hair Hitler reverted to his previous pack of nativist and xenophobic rantings about immigrants, facts be damned. If anything, he was worse, with his talk of a “deportation task force” and “criminal aliens.” Huffington Post reported that Trump confidante Corey Lewandowski (still being paid by both CNN and the Trump campaign) said the speech was “written to appeal directly to white men.” Guess we can check that off.

So Trump solidified his support with white supremacists. Former KKK leader David Duke and his alt-right buddies live-tweeted the whole thing. “Diplomacy in the morning. Nationalism in the evening. #Trump is back in a big way!” Tweets from right-wing hatemonger Ann Coulter were just as sickening: “I think I’ll watch this speech every night before going to bed so that I will sleep like a baby.”

Trump’s few Hispanic surrogates began to have second thoughts after his latest ravings. From Politico:

Jacob Monty, a member of Trump’s National Hispanic Advisory Council, quickly resigned after the speech. Another member, Ramiro Pena, a Texas pastor, said Trump’s speech likely cost him the election and said he’d have to reconsider being part of a “scam.” And Alfonso Aguilar, the president of the Latino Partnership for Conservative Principles, said in an interview that he is “inclined” to pull his support.

“I was a strong supporter of Donald Trump when I believed he was going to address the immigration problem realistically and compassionately,” said Monty, a Houston attorney who has aggressively made the Latino case for Trump. “What I heard today was not realistic and not compassionate.”

It doesn’t take much research to learn the facts about immigration: that illegal immigration has dropped since the 1990s; that immigration numbers have leveled off; that a lot more money is being spent on border enforcement; that the number of people being deported has risen; that laws are being enforced. But Trump gets more mileage with his white supremacist followers by ignoring real information and repeating his incendiary immigration talking points. Remember that Politifact has given him the highest rate of lies of any political candidate this election season, while Democratic presidential nominee Hillary Clinton has the highest rate of telling the truth.

Every fall, we see some version of the “Peanuts” cartoon in which Lucy swipes the ball away just before Charlie Brown kicks the football. The Charlie Brown media don’t seem to know how to learn that Trump-Lucy isn’t going to change and is going to keep swiping that “softer” image of Trump away from them over and over again.

In the comic, the worst that happens is that Charlie Brown lands flat on his back. With the hate speech from Trump and his supporters, real lives are at stake.

2 Comments on “Trump’s immigration ‘softening’ came with a sledgehammer”

1994: The Rev. Giuseppe Diana, an Italian parish priest who fought organized crime, was shot and killed while preparing to celebrate Mass in his church in Casal di Principe. Click Political murder of the day for details.