Hey, media: GOP never had a monopoly on patriotism 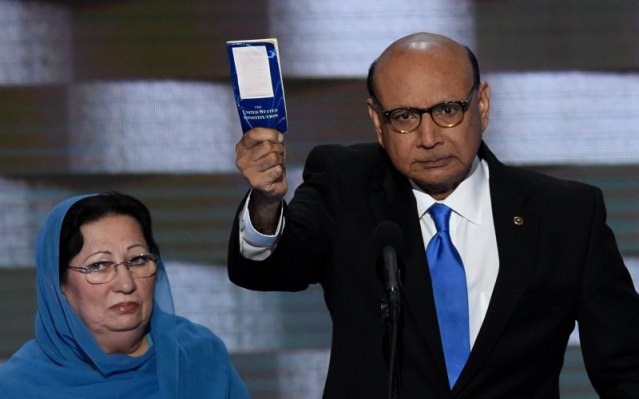 Ghazala and Khizr Khan at the Democratic National Convention, suggesting that Donald Trump should read the Constitution.

Now that both parties have finished the presidential nominating processes at their national political conventions, we can look at both parties’ take-home messages, and they couldn’t be more different. The Republicans warn of the coming of the apocalypse; the Democrats look to work together to make America better. The general impression from reports of the approximately 15,000 members of the media at both conventions was that the Democrats had more success than the Republicans.

But one of the most disturbing aspects of coverage of the conventions was the media conventional wisdom that by talking about religion and (especially) patriotism, the Democrats had somehow confiscated GOP talking points. “Over four flag-waving days in Philadelphia, Democrats stole the Republicans’ mojo,” led one CNN story.

As Democratic delegates chanted “USA! USA!” and military leaders celebrated America’s power, speaker after speaker at the Democratic National Convention struck themes that have long been hallmarks of Republican rhetoric: tributes to service, sacrifice, American leadership and, above all, a repeated reaffirmation of American exceptionalism. …

“The Democratic convention was a convention of patriotism this year,” wrote Erick Erickson, a conservative radio host and blogger. “Democrats were for you. If you want to be free, the GOP was doom and gloom.”

The praise echoed many of the reactions that followed President Barack Obama’s speech Wednesday night, when conservatives took to Twitter to praise its optimism and bemoan the fact that a Republican wasn’t making it.

In case conservatives, CNN, and other media outlets haven’t noticed, Democrats have been talking about these same issues and aspects of America for a long time. It’s just been easier for the media to buttonhole the two parties into two camps, one that supposedly was “patriotic” and one whose patriotism could be questioned. It’s a simplistic way of doing journalism, without doing any real analysis, and it basically repeats Republican talking points.

It’s always been a false dichotomy. There are plenty of people in both parties who have served their country in the armed forces and in community and public service. There are members of both parties who avoided military service with deferments during the Vietnam War-era draft. There were a lot of Republican “chicken hawks” who avoided service themselves with multiple deferments yet led the country into war once they got into office. There are people in both parties who stress their faith and those who are uncomfortable doing so. Yet the media insist on painting Republicans and Democrats with a broad brush on these issues.

Consider the 2004 election. The Democratic candidate was Sen. John Kerry, a Vietnam War veteran who was awarded a Silver Star and a Purple Heart for his Navy service, despite the efforts of the “swift-boat” campaign to discredit that service. The GOP candidate was President George Bush, who had avoided active duty. Yet if the media were to be believed, it was the Republicans who were the party of patriotism, even as delegates shamelessly wore Purple Heart Band-Aids on their cheeks, mocking Kerry’s service. I don’t know about you, but it didn’t seem very patriotic to me to mock a guy who actually served while your candidate tried to get by with a little desk duty.

Probably the most searing moment of this year’s Democratic convention was the speech by Khizr Khan, whose son, U.S. Army Capt. Humayun Khan, was killed by a car bomb while serving in Iraq. Khan specifically addressed GOP presidential nominee Donald Trump, who has called for banning Muslims from coming to America. Khan delivered his remarks without a teleprompter and spoke from his heart. This account is from MSNBC:

Khizr Khan, the father of the fallen 27-year-old captain, told the audience in Philadelphia, “Hillary Clinton was right when she called my son, ‘the best of America.’ If it was up to Donald Trump, he never would have been in America.”

Khan, standing alongside his wife, reached into his pocket and pulled out a copy of the U.S. Constitution. “Let me ask you,” Khan said, addressing Trump directly. “Have you even read the United States Constitution? I will gladly lend you my copy. In this document, look for the words ‘liberty’ and ‘equal protection of law.’

“Have you ever been to Arlington Cemetery? Go look at the graves of the brave patriots who died defending America – you will see all faiths, genders, and ethnicities. You have sacrificed nothing and no one.”

It was a gripping moment for all who were watching and for all who watched and read his words later. Except for those watching Fox News, of course, because the channel chose not to air Khan’s remarks, lest its viewers be exposed to patriotism from a Muslim immigrant whose family had made the ultimate sacrifice.

No. To Fox — and to too many in the media — patriotism is a one-way street, for Republicans only.