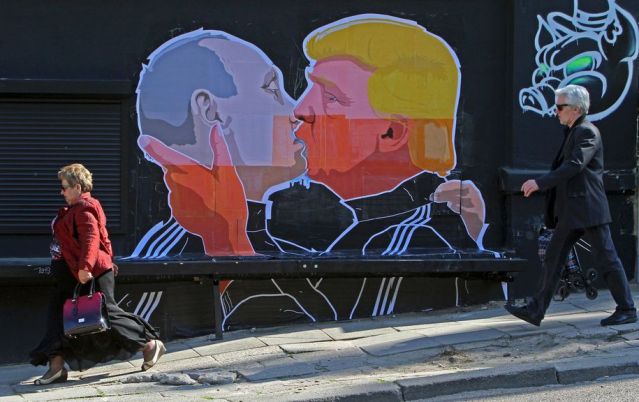 Vlad, I hope you can take time away from trying to elect your fanboy Donald Trump to answer my letter.

Do you mind if I call you Vlad? Ever since I learned that an email I sent to the Democratic National Committee was one of the thousands released after DNC emails were hacked by Russian intelligence, I figured you wanted to become buddies. It made me feel special, knowing that you and accused rapist Julian Assange of WikiLeaks had taken a personal interest in me. So here we go.

First, let’s get to know each other a little better. What are your hobbies? Do you like to spend most of your day with your shirt off on a horse, just to prove your manliness? Do you like to do things other than have dissidents jailed, like the feminist punk group Pussy Riot, or have your critics assassinated, such as journalist Anna Politkovskaya, shot in Moscow, or Alexander Litvinenko, poisoned with radioactive tea in London? (There are so many more, too — you sure keep busy!)

It’s good to see that you’re taking such an interest in our presidential election. We’ve known for a while that you and Russian state-run media are heavily favoring your BFF, Republican presidential nominee Donald Trump. Now we know why, since Trump has been financed by Russian oligarchs for a while. If U.S. banks don’t want to lend him any money, why shouldn’t he borrow from his Russian buds? I say Da! (Bet you didn’t know I knew some Russian, did you?)

It’s funny to me that the U.S. media doesn’t seem very much interested in the story of Russians propping up Donald Trump. I guess they’re too interested in the latest anti-Clinton “scandal” of the day, and they don’t seem smart enough to pay attention to more than one story at a time. But that’s your whole idea, isn’t it, since you dumped these emails right before the Democratic National Convention, just to try to ruin Hillary Clinton’s candidacy.

Do you spend a lot of time plotting which Eastern European country to invade next? Now that Trump has said he’ll ignore promises the United States made in our treaty under NATO and let some countries hang out to dry, you can take your pick! If he wins in November, don’t worry about any interference from us (wink, wink).

So back to our email pen pal relationship. I figure I don’t need to tell you much about myself, since your hackers don’t have any compunction into breaking into anyone’s email. You won’t find anything as interesting in my account as the DNC emails, just shared jokes and news about family and church committees and the like. You’ll find that an awful lot of political groups ask for money all the time, but you knew that already from breaking into the DNC.

Anyhoo, hope you’re having a great summer and that you can take a break by spending some time at your dacha (heh — there’s my Russian again!). I figure you won’t be heading to the Rio Olympics since so many Russian athletes have been banned, but at least it wasn’t the whole team. Hard to say if they’ll pass drug tests elsewhere, though, with the Russian state-run doping program and all. Too bad Russia will come up short in the medal count. Oh, well!