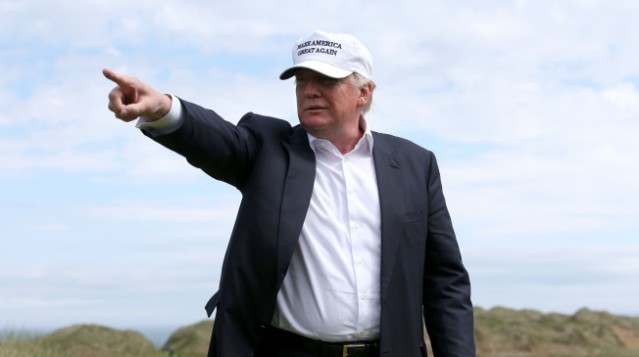 Why isn’t the media all over this story? It seems to be the latest word in the Donald Trump “scampaign.”

Donald J. Trump Jr. sent hundreds of emails soliciting campaign donations for his father’s presidential campaign to foreign politicians, including all elected officials from the United Kingdom, Iceland, and Australia. But according to the Federal Election Commission, that’s illegal. Here’s what the FEC says on the subject:

The prohibition: The Federal Election Campaign Act (FECA) prohibits any foreign national from contributing, donating, or spending funds in connection with any federal, state, or local election in the United States, either directly or indirectly.  It is also unlawful to help foreign nationals violate that ban or to solicit, receive, or accept contributions or donations from them.  Persons who knowingly and willfully engage in these activities may be subject to fines and/or imprisonment.

Yet here is the solicitation. This one was sent to Scottish MP Natalie McGarry:

Here was McGarry’s reply: “Quite why you think it appropriate to write emails to UK parliamentarians with a begging bowl for your father’s repugnant campaign is completely beyond me.”

Australian MP Tim Watts also was puzzled about the solicitation: “Has someone added me to the Trump email list as a prank, or has he bought a really dud spam email marketing list?”

This wasn’t just one email; it was LOTS of emails. “Numerous members of the British parliament have complained that they have received multiple emails from the Trump campaign asking for a donation,” says a story on Talking Points Memo. So many that some are asking if the Trump emails can be stopped.

“Members of Parliament are being bombarded by electronic communications from Team Trump on behalf of somebody called Donald Trump,” Sir Roger Gale said on Tuesday, according to Politics Home. “Mr Speaker, I’m all in favour of free speech but I don’t see why colleagues on either side of the House should be subjected to intemperate spam.”

Sir Roger seemed to have trouble even deleting the Trump emails.

“Efforts to try to have these deleted have failed. I wonder if you’d be kind enough to intercede with the Digital Services Department to see if they may be blocked,” he lamented.

All campaigns send out emails asking for money, and it’s perfectly legal to purchase email lists for solicitation purposes. But even Trump and his campaign have to know that begging for foreign money is illegal — right?

There have been suggestions that Trump, far behind presumptive Democratic presidential nominee Hillary Clinton in both polls and the money race, purchased multiple email lists and sent out solicitations for campaign donations without knowing who was on the receiving end. Personally, I find that hard to believe. Otherwise, why would every elected official in three countries receive the same emails, all sent to official government addresses?

Consider if Hillary Clinton was doing this kind of solicitation. It would be front-page news everywhere and the subject of day-long discussions on Fox News. The Republican House already would have set up multiple committees to “investigate” the scandal, just like they did with Benghazi.

Maybe those in the media are so used to Trump lying and bending the law that the only reaction they can gin up is a collective yawn. But they might not be able to ignore it much longer. The Campaign Legal Center has filed a complaint about Trump’s solicitation practice, according to the web service Newsy. “It is a no-brainer that it violates the law to send fundraising emails to members of a foreign government on their official foreign government email accounts, and yet, that’s exactly what Trump has done repeatedly.”

I guess it’s too important to hype a non-story about Bill Clinton talking to Attorney General Loretta Lynch about his new grandson and speculate how it might affect the Hillary Clinton email “scandal.”

1949: The president and prime minister of Syria were shot and killed as part of a coup by a military junta. Click Political murder of the day for details.