Clinton’s gamble on gun safety is paying off 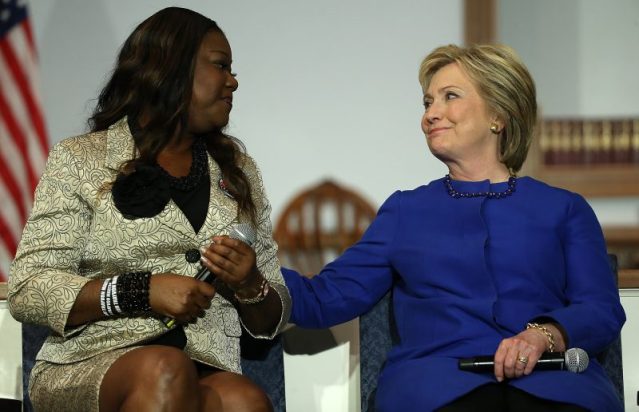 Last fall, after the latest mass shooting—this one at an Oregon community college that killed nine people—Democratic presidential candidate Hillary Clinton decided to go all in on the gun issue.

No doubt it was a personal as well as a political decision. This is not a new issue for Clinton. She has been working against gun violence since she was first lady and continued as a New York senator. She co-sponsored legislation to close gun show loopholes and ban assault weapons, and voted against immunity for gun dealers and manufacturers.

But it came with political risk. Guns always have been a divisive issue, and various media—mostly on the conservative side (you’ll pardon me for not providing links)—predicted that gun safety would be a losing issue for her in the general election. This is despite the fact that the vast majority of people in this country want common-sense gun laws such as universal background checks, including Republicans and gun owners.

After the Orlando mass shooting, more people are taking a second look at bans on assault weapons and denying gun-buying privileges to people on the terrorist no-fly list—“no-fly, no-buy,” as the bill is known.

In other words, we’re in a new environment now. Many Democrats, such as Connecticut Sen. Chris Murphy, always have been willing to stand up for gun safety. But as we saw this week, that number is growing, and people and the media are noticing.

And the fact that Clinton made it a central part of her campaign has helped to move the gun safety goalposts. Not (unfortunately) in the sense that any meaningful gun safety legislation has passed, nor is it likely to any time soon. But there’s been a definite shift in the public debate and public opinion when it comes to certain types of issues regarding guns. Consider:

The mood is changing, albeit slightly and slowly. More and more Democrats are willing to stand up to the gun lobby and are openly talking about gun safety laws. The reasons for that are many, and I don’t want to take anything away from the courage of House and Senate Democrats who are finally demanding action. But I think we can thank our presumptive Democratic nominee for standing strong on the issue and bringing it to the forefront.

Clinton has an entire plan on her campaign website detailing what is needed to fight gun violence. Those proposals include passing “comprehensive background checks, cracking down on illegal gun traffickers, holding dealers and manufacturers accountable when they endanger Americans, and keeping guns out of the hands of domestic abusers and stalkers.”

Clinton’s strong stance against gun violence earned her the endorsement of the “Mothers of the Movement”—mothers of children and young adults killed by gun violence or in police custody. She has met and appeared with them multiple times throughout the campaign. Those mothers include Sybrina Fulton, mother of Trayvon Martin, who was shot and killed while walking down the street holding a bag of Skittles and a can of iced tea, and Lucia McBath, mother of Jordan Davis, who was gunned down by a white motorist because of an argument over loud music. A video featuring these women is part of the Clinton campaign.

Guns will now be a major issue in the fall campaign, and the positions of the two presumptive candidates couldn’t be further apart. According to a story in The Nation:

For months, Hillary Clinton has made guns a central theme of her campaign. One of every four television ads she ran in New Hampshire were about gun control. She has regularly met with victims of gun violence, particularly mothers, and unveiled a comprehensive gun-control plan last October. This is the toughest stance of any Democratic candidate since at least Bill Clinton in 1996, who invited James and Sarah Brady to speak in prime time at the DNC, though Hillary’s proposed reforms are much more far-reaching.

And what does Trump say? Guns, guns, and more guns.

This sort of fear-mongering and rank exploitation of racial anxieties isn’t new for Trump, but it’s terrifying to see him fuse it with the NRA movement to loosen gun laws and put weapons in the hands of every American who wants one. Wayne LaPierre hasn’t been afraid to do the exact same thing, but, like no presidential candidate in recent memory, Trump is ready to take the show mainstream.

Who wins in this contest? Here’s what the author of The Nation story contends:

When these two candidates meet in the general-election arena, the NRA and the burgeoning gun-reform movement will have the two strongest respective champions imaginable. It’s hard to say at this early vantage point how the debate will play out, and to whose benefit, though based on polling around the issue, I’d bet Clinton.

None of us is naive enough to believe that anything substantive on gun safety will happen anytime soon with the current congressional makeup. Elections matter, and when pro-gun voters show up in larger numbers than those in favor of stricter gun safety laws, they win, especially in off-year elections.

But the Orlando mass shooting, with its 49 victims, seems to be tilting opinion. Maybe the sheer carnage of the attack was enough to make people pay attention.

I’ve always believed that if the murder of 20 schoolchildren in Newtown, Connecticut, wasn’t enough to make Congress act, what would? Maybe Orlando. Maybe not. But the surrounding debate just feels different this time around.

If you’re old enough to remember Dan Rowan and Dick Martin’s Laugh-In, you might enjoy this walk down memory lane (from 1968, no less!) when it comes to Congress and guns. I guess some things don’t change.

Congress has a history of ignoring the will of the people when it comes to gun safety. Even though that’s unlikely to change soon, it’s nice to have a glimmer of hope. And to finally see our elected Democratic officials standing up for what’s right.

← Life after ‘Brexit’ will not be tea and crumpets
Hey, media: Trump campaign solicited foreign donations. Why aren’t you covering it? →

1965: Remembering Malcolm X, the man who inspired the Black Power movement, who was shot and killed as he was giving a speech in New York City. Click Political murder of the day for details.