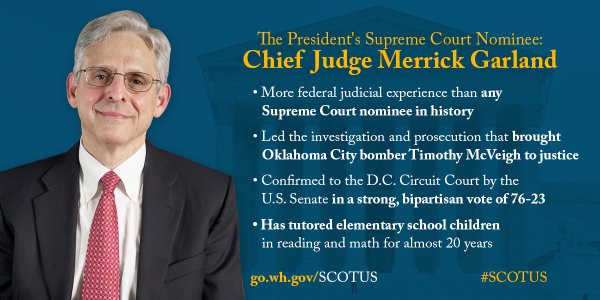 President Obama didn’t let Republican intransigence stand in the way of doing his constitutional duty, nominating Judge Merrick Garland for the U.S. Supreme Court. With this action, once again Obama has shown how he’s two steps ahead of the GOP.

Garland is chief judge of the United States Court of Appeals for the District of Columbia Circuit. By all accounts, he is a stellar jurist, described by Democrats and Republicans as eminently fair and qualified. Garland has more federal judicial experience than any Supreme Court nominee in history. But Republican senators dug themselves a hole that they can’t seem to find their way out of.

Within hours of the announcement of Justice Antonin Scalia’s death on Feb. 13, Senate Majority Leader Mitch McConnell announced that there would be no hearings and no vote on any Supreme Court nominee from Obama, saying that choice should be left to the next president, even though there was nearly a year left in Obama’s term when Scalia died. It’s not a stretch to say that Republicans think Obama deserves only three-fifths of a presidency. Other senators quickly followed suit, promising to block any nomination, no matter who it might be.

Several GOP senators are on record praising Garland. In 2010, during the confirmation process for Elena Kagan, Utah Sen. Orrin Hatch said there was “no question” Garland could be confirmed to the Supreme Court, calling him a “consensus nominee.”

As a matter of fact, this is what Hatch said just one week ago: “The president told me several times he’s going to name a moderate [to fill the court vacancy], but I don’t believe him. [Obama] could easily name Merrick Garland, who is a fine man. He probably won’t do that because this appointment is about the election. So I’m pretty sure he’ll name someone the [liberal Democratic base] wants.”

Look, this isn’t hard. The Constitution states that the Senate has the power of “advice and consent” to presidential appointments and nominations. Nowhere in Article II, Section 2, does it say, “except in election years” or “when a majority of senators are not of the president’s party” or “just because we say so.”

A few Republican senators claim they’re willing to go so far as to meet with Garland, but with no promise of any kind of hearing. Iowa Sen. Chuck Grassley of Iowa, chairman of the Senate Judiciary Committee, said he’ll meet with the nominee — after all, he was willing to “meet with a dictator” — but no dice on a hearing. Senate Majority Whip John Cornyn of Texas made vague threats, hinting that any nominee would “bear some resemblance to a piñata.”

Vulnerable GOP senators facing tough re-election battles this year (of which there are many) are really caught in the middle. Illinois Sen. Mark Kirk said he’s in favor of hearings (knowing full well they won’t happen) and that the GOP should “man up” and cast a vote on Garland. New Hampshire Sen. Kelly Ayotte is willing to talk to Garland, but no more. Wisconsin Sen. Ron Johnson all but admitted that the Senate would do its job if a Republican president were in the White House. McConnell, meanwhile, is making up supposed “rules” about not approving justices in a president’s last year, even though there’s no precedent for that.

So what’s the next step? Garland is 63 and already is in a job most lawyers only dream about, so he may be a sacrificial lamb in a nomination fight that Obama suspected would never come to fruition. If the Senate keeps taking the “it’s my ball and I’m going home” attitude, Garland is still in an enviable position. He can still keep tutoring kids in northeast Washington, something he’s done for 18 years and something that seems to have brought him a sense of inner satisfaction.

What will happen to Garland’s nomination? Here’s the scenario as spelled out on Rachel Maddow’s blog: 1. Impose an eight-month blockade on the Garland nomination, unlike anything ever seen in American history, including a prohibition on floor votes and confirmation hearings. 2. Wait for the election results in November. 3. If a Republican wins the presidency, do nothing. 4. If Hillary Clinton wins, revisit the blockade and consider confirming Garland during the lame-duck session between Election Day and the start of the new Congress in 2017.

The benefit to Republicans would be obvious: They’d confirm a 63-year-old moderate, rather than let Clinton nominate someone younger and more liberal. At that point, GOP senators appear craven and unprincipled, but by all appearances, Republicans just don’t care.

Constitutional duties be damned, right? Except that Senate Democrats already have put the kibosh on Door No. 4; Minority Leader Harry Read said they will not cooperate in such a scenario.

This is where the three-dimensional chess analogy comes in. There are many qualified nominees Obama could have chosen, certainly someone younger and more liberal. Instead, he chose a nominee who would have no possible disqualifications except for the fact that he came from Obama, a president Republicans have attempted to stymie his entire time in office. He even chose the very man Orrin Hatch suggested.

Nearly two thirds of Americans want the Senate to do its job and give Judge Merrick Garland a fair hearing. If the Republican Senate refuses, Obama wins in the court of public opinion. Vulnerable GOP senators might be more likely to lose their seats, ensuring a Democratic takeover in November. The issue could even turn voters toward the Democratic presidential nominee. And the Obama administration is using the full-court press for Garland, so no one can say officials aren’t trying as hard as they can or taking their responsibility seriously.

Your move, GOP senators. Or, “please proceed,” as Obama might say.

← Sorry, media: The GOP is not imploding
Women voters: Their growing influence in politics and policy →

2010: A pilot with a grudge against the U.S. government flew a single-engine plane into an office building in Austin, Texas, aiming at an office of the Internal Revenue Service where 200 federal employees were working. Two people died. Click Political murder of the day for details.