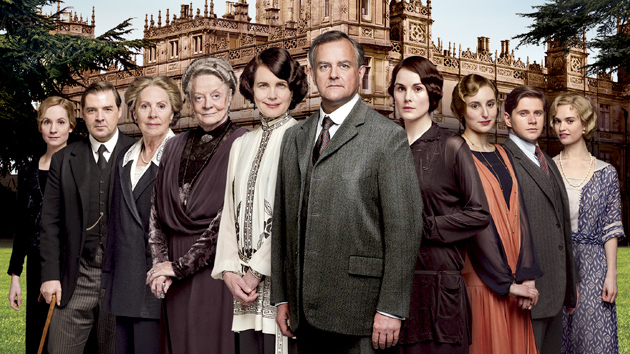 Downton-philes — and I count myself among them — eagerly await the first episode of the upcoming sixth and last season of Downton Abbey. And as silly as Julian Fellowes has made some of the plot lines — and boy, have some of them been silly — we’ll still miss tuning in on Sunday nights to hear Violet’s latest quips and to see what swain is trying to win Mary’s heart. And to see what new fashions, hats, and hairstyles the women are sporting.

So we’re taking a break from politics and media to revisit a post written after the sad news that Fellowes was hanging up the tales of love affairs, perfectly straight cutlery, and multiple daily outfits. I know the show has already wrapped up, but perhaps Mr. Fellowes took some of my “suggestions” for plot possibilities when they were first offered. It could make the show more fun than it already is. I should probably include the words “SPOILER ALERT” here, but if you’ve read this far, you already know what’s happening. Anyway, my “predictions”:

Mary and Anna form a detective agency and finally solve the odious Mr. Green’s murder (the guilty party turns out to be Violet’s awful new lady’s maid, Denker). They leave Scotland Yard in the dust but wear much better hats.

Thomas goes to Hollywood and becomes a swashbuckling film star. He also finds that it’s easier to meet eligible men in Hollywood.

Carson marries Mrs. Hughes but returns to the stage as a song-and-dance man. Remember that on the set, many actors have reported that the entire cast and crew have been wowed by the “dance moves” of the actor playing Carson, Jim Carter. I think he’s just itching to put that on screen, and I, for one, would pay money to see it.

Isobel makes several medical discovery breakthroughs but is denied the Nobel, because the committee tends not to award women. Remember that Rosalind Franklin didn’t get to share the prize for the DNA double helix model, even though she did as much as work as Francis Crick and James Watson. (Physicist Marie Curie, however, did score a win.)

The stock market is about to crash, so Robert loses the family fortune (AGAIN), showing his lack of investing prowess. He is forced to turn Downton into an amusement park, featuring attractions such as minstrels and Morris dancers. It fails miserably.

To made ends meet, Violet and Cora open a hat shop, unloading the ladies’ vast collections. Depression or no Depression, Brits always wear hats. No one wears hats like the Brits.

Mrs. Patmore opens a tea shoppe. She also publishes a book of recipes with added sage advice heard on the show such as “Sympathy won’t butter the parsnips.” Other examples are “Crabbiness overcooks the carrots,” “Silliness makes a souffle fall flat,” and “Peeking into the oven early ruins a proper sponge.” (Hey, that one is actually true!)

Daisy becomes a spy and ends up working for MI6 during WWII. She’s learning math now and turns out to be a whiz. She eventually joins the team to help Alan Turing break the Enigma code.

And Edith becomes a nun after Marigold decides she would rather live with the farmers. Meaning Edith never gets to wear this again:

Yeah, I took a picture of that stunner when I went to see the costume collection on display at the Winterthur Museum near Wilmington, Delaware. I told you I was a Downton-phile.

1961: Herbert Lee, a civil rights activist working to register Black voters in Mississippi, was shot and killed by a pro-segregationist state legislator. Click Political murder of the day for details.