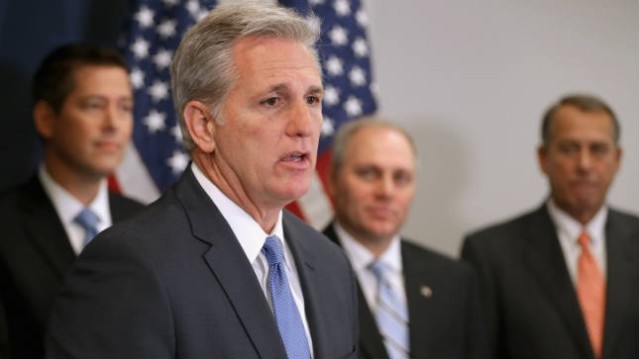 With McCarthy out as speaker, which unlucky stiff will take his place?

With Majority Leader Kevin McCarthy’s surprising exit from the House speaker’s race, Republican representatives are left in a quandary — who the heck is going to take a job that nobody wants?

There’s no shortage of suggestions. Fox News blowhard and radio host Sean Hannity is touting former Speaker Newt Gingrich for the job, and Gingrich, who never met a camera he didn’t like, said he’s willing as long as he can get 218 votes. (No one else is calling him.) Many in the GOP see Wisconsin Rep. Paul Ryan as their savior, but Ryan, who has higher ambitions, can’t say “hell, no” loudly enough. Other names are being tossed out like water balloons, and have as much lasting power, such as Mitt Romney.

A Democratic California congressman even posted an ad on craigslist asking for applications. “Requirements: Proven ability to work with irrational people who pursue narrow priorities at the expense of millions of others. Proficiency in Word, Excel and PowerPoint. Babysitting experience STRONGLY PREFERRED. No Congressional experience necessary. Please e-mail resume and an outline of your plan to TheNextFrankUnderwood [at] gmail [dot] com.”

So we have an ungovernable bunch of Tea Party congress-critters who care more about stomping their feet and threatening to shut down Washington than they do about governing. The speaker’s post is required by the U.S. Constitution, although there’s nothing that says the person has to be a sitting representative.

What’s a country to do? Why, look to models from history, literature, and popular culture, of course. Here are a few modest suggestions that just might fit the modern GOP brand.

Sen. Joseph McCarthy. Hey, if you can’t get one McCarthy, try another. The infamous Wisconsin senator made his name in the 1950s for his political anti-Communist witch hunts, much of it based on false innuendo. After seven congressional committees could find no blame in the tragedy over the Benghazi killings, the GOP established another panel just to make stuff up and lead a new smear campaign. Committee Chair and South Carolina Rep. Trey Gowdy apparently learned from the master: Do it by badgering witnesses, tossing around fanciful numbers, and destroying people’s credibility by deceptively editing transcripts. Sound familiar? Worked for “Tail-gunner Joe” — at least in the short term. Have you no sense of decency, GOP?

Caligula. He was a Roman emperor who served from 37-41 C.E., until he was assassinated. He is usually described as an “insane tyrant” famous for “cruelty, sadism, extravagance, and sexual perversity.” Sounds about right for the “family values” crowd, as long as that sexual perversity didn’t include gay marriage.

Iago. Othello’s sinister adviser would fit right in with today’s Republican Party. He wasn’t afraid of smear campaigns (check, Desdemona); throwing allies under the bus (check, Roderigo); making up stories about others to further his career (check, Cassio); and overall dishonesty (check and double-check). I’m guessing he’d be from a Southern state.

Ebenezer Scrooge. If Charles Dickens’ legendary miser were alive today and in Congress, you know that he would have signed Grover Norquist’s “I’ll never raise taxes” pledge and that he would willingly accept all campaign contributions from Wall Street. But only if his story ends before bed on Christmas Eve. By the morning, he would have switched parties.

Vice President Sally Langston from Scandal. No reason men should have all the fun. True, she murdered her husband, covered up her daughter’s abortion, and abandoned the Republicans to run as a third-party candidate. But she’s a religious conservative who wore her born-again bona fides on her entire designer suit, not just her sleeve. The caucus would elect her in a nanosecond.

The best James Bond villain: Goldfinger. All of the Bond villains were fabulously wealthy, but consider: Goldfinger wanted to blow up an atomic bomb at Fort Knox. Why? He wanted to ruin the world economy so that his gold would be the only wealth remaining. It must have to do with getting the country back on the gold standard. Surely libertarian devotees of former Rep. Ron Paul can get on board with that.

No doubt, the GOP caucus eventually will elect somebody to be speaker, or the Republicans will keep Boehner around until they enlist some other poor slob. But remember: The speaker of the House of Representatives is second in line to succeed to the presidency. So for God’s sake, Secret Service agents, do your jobs right and protect President Obama and Vice President Biden.