Short history of U.S. marriage equality on this historic day 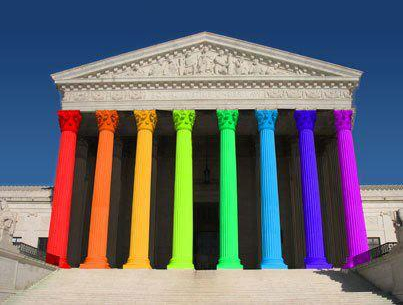 Just adding my voice — even though it’s a straight one — to the happiness of people across the country who are celebrating marriage equality. But it’s worthwhile remembering how we got here.

The saga actually begins in the early 1970s. In 1972, the U.S. Supreme Court dismissed a challenge to a ruling against a same-sex couple asking to get married. In 1975, a couple filed the first federal lawsuit seeking the freedom to marry for same-sex couples. They lost.

There were similar rulings by lower courts until 1993, when the Hawaii Supreme Court ruled that denying marriage to same-sex couples violates the Equal Protection Clause of the Hawaii Constitution. But in 1998, Hawaii amended its constitution to ban gay marriage, so the court had to dismiss the original challenge.

Other historical footnotes: In 1996, the federal Defense of Marriage Act was signed. Some states, staring with California, legalized domestic partnerships. Vermont established civil unions. Neither state fell into the ocean nor was destroyed by earthquakes. Other states went in the other direction, not only banning gay marriage but also limiting familial rights between same-sex couples.

When Gavin Newsom, as mayor of San Francisco, started issuing marriage licenses to same-sex couples in 2004, few realized the sea change that was coming. (Well, I’m sure many did, but few saw it coming so quickly.)

The date was Feb. 12, 2004. There was a flurry of court filings, petitions, court decisions, and local governments taking actions on the legality of marriage equality. Exactly six months later, on Aug. 12, 2004, the California Supreme Court ruled that San Francisco had exceeded its authority.

Then Massachusetts followed suit. With a state Supreme Court ruling, It became the first U.S. state to issue licenses to all same-sex couples, following in the footsteps of the Netherlands, Belgium, and a few Canadian provinces.

Remember, this was just 11 years ago. What a difference a decade makes.

I remember this clearly: A gay friend at work — a liberal who supported Sen. John Kerry’s campaign for president and who desperately wanted President George Bush out of office — dejectedly told me he saw the writing on the wall. He would love to marry his partner, he said, but he feared that the marriage equality from California and Massachusetts would spell doom for it nationally, and ensure Bush’s re-election.

Republican operative Karl Rove, seizing an opportunity, worked with states to get initiatives banning same-six marriage on the ballot in 11 states. The initiatives passed in all 11, with the closest contest being in Oregon, where it still passed with 57 percent approval. The initiative passed with 86 percent approval in Mississippi. One of the states was the swing state of Ohio. Ohioans voted for Bush along with a marriage equality ban, and the president was re-elected.

Conservatives were elated and started to talk of a federal amendment to the Constitution banning same-sex marriage. A story from NBC News after in November 2004 quoted gleeful conservatives, who were sure they could see the next logical step. “Historically, amendments to the Constitution only happen after consensus is reached — they don’t get passed when conflict is raging,” said Robert Knight of the conservative Culture and Family Institute. “But now we’re moving quickly toward consensus. A lot of Democrats may have a change of heart.”

Actually — not so much. Progress was coming, and a lot more quickly than Knight or any of his conservative cohorts could possibly imagine. But several states continued to pass marriage equality bans, even as others passed domestic partnership measures.

On May 15, 2008, the California Supreme Court ruled that denying marriage licenses to same-sex couples violated the state Constitution. People from across the country flew to California to get married. I remember that another friend from work took advantage of the option to live-stream her wedding from a California courthouse, so we all got to watch in real time. But in the fall, voters in the state would approve Proposition 8 at the same time they elected Barack Obama as president.

Then began a period of back and forth, but public opinion was changing. In 2010, for the first time, polls from CNN and the Associated Press showed that a majority of people in the U.S. backed same-sex marriage.

New York Gov. Andrew Cuomo signed a marriage equality bill, and actor Neil Patrick Harris tweeted that he proposed to his boyfriend — and was accepted. New Jersey Gov. Chris Christie vetoed a marriage equality bill from his state Legislature, claiming that “voters should decide.” As if citizens should ever vote on a matter of civil rights. How’d that stand work out for you, governor?

The District of Columbia OK’d same-sex marriage. Maine banned it. Yet in 2012, Maine voters approved marriage equality, as did voters in three other states. President Obama already said he had “evolved” on the issue. SCOTUS overturned most of DOMA and got rid of Prop 8 in California.

Between acts by state legislatures and state supreme court decisions, marriage equality came to be the law of the land in 37 states. Popular opinion kept growing, with bigger and bigger majorities supporting same-sex marriage.

Until today, when it’s the law of the land everywhere.

I sent a text to a gay friend in New York to report that the Gay Men’s Chorus of Washington, D.C, was outside the Supreme Court, singing “To Dream the Impossible Dream” from Man of La Mancha. I admitted that I was verklempt just listening. He texted back that he was driving when he heard the news, and he had to pull off the road because he was crying. He said I better be there for his wedding if he and his partner decide to tie the knot.

So best wishes to all couples who can tie the knot if they so choose. A hat tip to Freedom to Marry for its well-researched timeline, from which this is truncated. It was fascinating reading the whole history.

← Donald Trump’s bubble: How much expansion before it pops?
Media “analysis” on marriage equality ruling helping GOP is hogwash →

1969: Seven people were killed by the Manson Family cult over two nights in Los Angeles in brutal killings that shocked the nation and that tied together Beatles’ music, racial politics, and a bizarre theory about a coming apocalypse. Click Political murder of the day for details.