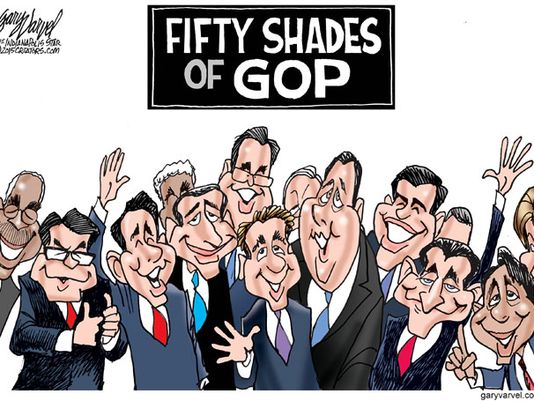 Cartoon by Gary Varvel of the Indianapolis Star

The 19 or so candidates who may be gunning for the 2016 presidential nomination are in a bind. The first debates are less than two months away, and both Fox News and CNN have decreed that space is limited to those polling in the top 10. What’s a second-tier candidate to do?

Fox is proposing an afternoon “forum” for those left off the evening debate stage, which doesn’t make those polling near the bottom very happy. There have been better proposals to make the debates a two-night event, with match-ups drawn at random — an idea from several outlets, including the National Review.

The first debate is set for Aug. 6 in Cleveland, Ohio. And Ohio Gov. John Kasich, long considered a contender, although he hasn’t done much publicly about the race, is polling under the top-10 threshold, so he wouldn’t even be able to take part in a debate in his own home state.

New Hampshire’s influential newspaper, the Union Leader, is having none of it. The same day as the Aug. 6 debate, it plans to host a presidential forum, to be broadcast on C-SPAN, which also will broadcast it on the radio.

“Criteria for the New Hampshire Forum on Aug. 6 will include such things as established campaigns and staffing,” said a story in the Union Leader. The story didn’t address timing; or if some candidates would take part by satellite, in case they were in Ohio; or what would happen if a candidate in the Fox News debate refused participation in the Union Leader forum.

“Union Leader Publisher Joseph W. McQuaid said the newspaper has been considering such a forum for some time,” the story said. “He said an open protest letter sent Wednesday to Fox and the Republican National Committee from 56 prominent state Republicans should be a wake-up call to everyone in New Hampshire.” No doubt about it; New Hampshire takes its first-primary-in-the-nation status very seriously.

There also was so little enthusiasm among the GOP hopefuls to schmooze and spend money on Iowa Republicans that the Ames Straw Poll has been cancelled, tossed out like a stale corn dog. The event always has been basically a fundraiser for the Republican Party of Iowa anyway. “We set the table and they didn’t come to dinner,” Iowa GOP Chairman Jeff Kaufmann said in a story in the Des Moines Register announcing the straw poll’s demise.

(In case you don’t remember who won the straw poll in Iowa in 2011, it was former Minnesota Rep. Michele Bachmann, which shows you how effective its predictive powers were.)

Whatever anyone thinks of these candidates or potential candidates, Republican voters deserve a chance to hear from them. A debate of 19 or 15 — or even 10 for that matter — is certainly unwieldy and won’t give GOP hopefuls a chance to say much. But saying a little on a national stage is better than saying nothing.

I still think a great approach is to put them all in a big box, like they did on Hollywood Squares. If Donald Trump doesn’t actually throw his toupee in the ring, he could host it — something he actually has experience in.

Better yet, run an NCAA-like tournament with different debate brackets, as I suggested in an earlier post. I still want to see a Rand Paul-Ben Carson match-up, just to see who could say the screwiest thing, or a Mike Huckabee-Rick Santorum faceoff, to see which one mentioned Jesus more.

Either would make better TV. Get the popcorn ready.

← GOP’s baby steps on climate change
Jeb! Bush the musical coming to a campaign near you →